in cake, christmas, product, treats - 11 December 2012
I do this to myself every year. As soon as the Christmas music starts playing in stores and the lights and tinsel starts emerging from storage, I succumb to the festive cheer and convince myself I enjoy baking, launching into a frenzy of icing sugar clouds and silver dragée chasing. Then I remember I don't really have the time, energy or will for it. And I don't even really like cake. But yet, here I am with this years' effort and I'll probably not stop there. Last year I made hundreds of meticulously iced gingerbread biscuits for all the neighbours. Go figure. 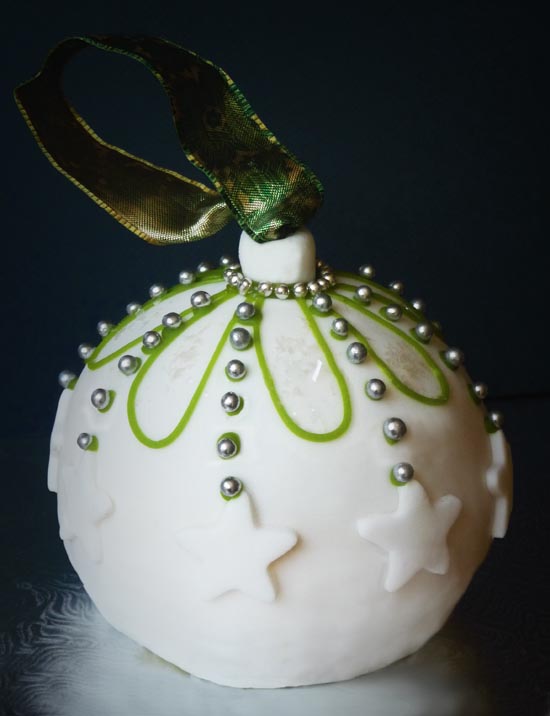 So here is my bauble cake. Not bad effort if I don't say so myself, although being a daft brush, I took a touch too much off the bottom and ruined the shape somewhat. I was going for a vintage bauble look although the husband thought it looks more like Holy hand grenade of Monty Python fame. Once I photographed the cake for the blog I seriously considered shoving it in his face :)

I created the base using Lakeland's new Hemisphere cake pans, which are quite useful as you previously would have to carve a square cake and waste (or if you are me, eat) the off-cuts. My first attempt I used a Fiona Cairns recipe which I should have known better than to use as everything I have made from her Bake & Decorate book has been a "royal" disaster. The cake was heavy, didn't rise much and the wouldn't have made a decent sphere following the pan's instructions to only fill by 2/3. The second attempt I just used a plain ol' classic sponge recipe with a little cinnamon and satsuma juice to flavour. This did rise but then got stuck in the pan even after hefty buttering. As it was quite a light sponge it was prone to breaking but I salvaged it with some crafty buttercream repair work.

The whole cake was then coated with an orange flavour buttercream, allowed to set for an hour before smoothing any ridges, then I rolled a thin layer of royal icing before piping and decorating.

These tins are a fab idea but I think if you are a novice-ish baker like me, then a sample recipe for a classic sponge suitable for the pan would be a good thing to include on the packet (or their website), particularly ingredient amounts to fill the pans and oven temperature as you are left to guess to some degree.

Which is a shame as I think I'd get a lot of use out of them if I could guarantee a faff free base. You could make a hill scene with green icing and some trees and skaters for the winter or picnic scene for the summer (well I thought that would be nice!), an island for a pirate theme, a ladybird or turtle for the kids, an igloo, numerous ball sports cakes (may do a Wimbeldon strawberry & cream tennis ball cake this year), planets, fruits... the list goes on. They would also be good as moulds for a semi-freddo, Baked Alaska or Summer Pudding too, so not just for Christmas.