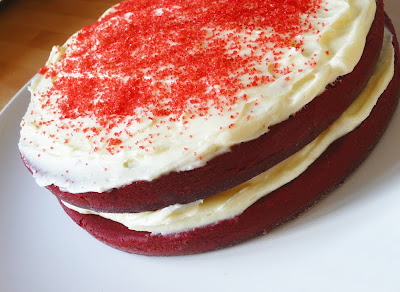 Ever since seeing the Armadillo wedding cake in the 1989 film Steel Magnolias, I have been slightly obsessed with the Southern United States classic, Red Velvet cake, a moist vanilla chocolate sponge. It is so alien, shocking red and dramatically contrasts with the classic cream cheese frosting. I've never made it before, but recently both The Catty Life and Gourmet Chick have featured a Red Velvet recipe from the Hummingbird Bakery Cookbook so that I could not resist anymore. 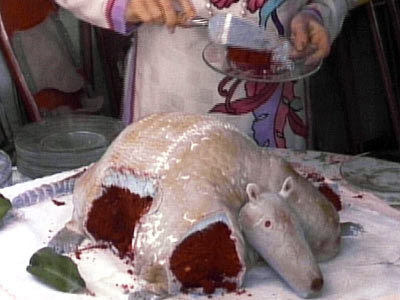 Screen shot from Steel Magnolias: Original image source not known - give me a heads up if this is yours!

The ingredients are a little unusual and the vinegar may get a few double-looks. One school of thought is that the reaction of vinegar and buttermilk helps turn the cake a more intense reddish brown. The other is that the vinegar reacts with the baking powder, fizzing it up, creating gas and helping it rise. I would go with the latter theory.

This recipe call for a lot of electric whisking and the first stage creaming the butter with the sugar with a hand held whisk just covered my kitchen and myself in a sugar storm. I'd champion the old-school wooden spoon for that bit in future.

Although you can make 12 large cupcakes, I chose to make this as a cake using two 20cm tins. They also suggest Dr Oetker Red Colouring, not the ‘Natural Red’ or ‘Scarlett’ to get the right red.

The top of the cake was decorated with granulated sugar coloured with a drop of red colouring. Spreading out the mixture on a plate and popping it on top of the hot cooker to dry out whilst the cake is cooking will dry out the colouring so you can sprinkle easily.

Thanks to @samuraijen, @hollowlegs and @dksfood for confirming that a tablespoon of lemon juice in milk is a good substitute for the buttermilk. It worked a treat - cheers!

Put the butter and the sugar in a bowl and beat (using a wooden spoon although it says an electric whisk) until light and fluffy and well mixed. Turn the mixer up to high speed, slowly add the egg and beat until everything is well incorporated.
In a separate bowl, mix together the cocoa powder, red food colouring and vanilla extract to make a thick, dark paste. Add to the butter mixture and mix thoroughly until evenly combined
and coloured (scrape any unmixed ingredients from the side of the bowl with a rubber spatula).

Spoon the mixture into greased tins and bake in the preheated oven for 20–25 minutes, or until the sponge bounces back when touched. A skewer inserted in the centre should come out clean. Leave the cake to cool slightly in the tray before turning out onto a wire cooling rack to cool completely.

Beat the icing sugar and butter together with an electric mixer on medium-slow speed until the mixture comes together and is well mixed.

Add the cream cheese in one go and beat until it is completely incorporated. Turn the mixer up to medium-high speed.

Continue beating until the frosting is light and fluffy, at least 5 minutes. Do not overbeat, as it can quickly become runny. When the cake is completely cold, spoon half the cream cheese frosting between the layers and the rest on top.

You may have tons of frosting left over as some people like much less frosting that the Americans do. After a Google, it seems that frosting freezes particularly well so that is what I have done with mine for future cupcake baking.