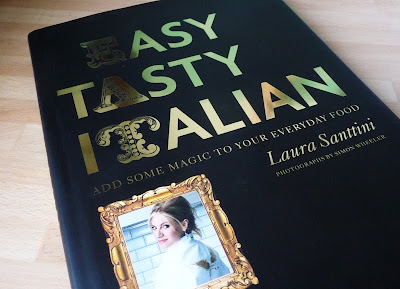 Alchemy, star dust, U-bombs, food bling, lyrics from Great Balls of Fire, quotes from the creator of the Sufi branch of Islam and Japanese word of the moment, umami. Yup, we are talking about Italian food here, and Laura Santtini is on a mission to revolutionise the way we perceive it.

Italians are incredibly stubborn when it comes to food and there are so many "rules" to obey. Traditions and methods are religiously practiced and any deviation away from these rules opens a whole can of mamma mia and impassioned arm waving. This obviously has the benefit of protecting recipes and creating heritage but it can be, well, just jolly annoyingly restrictive at times.

So I was excited to receive a book that wasn't afraid of Nonna's rolling pin across the back of the legs but yet, as I flicked through "Easy Tasty Italian", I was beginning to wonder if mamma was right all along. 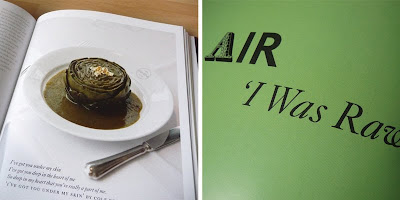 For one, recipes that requires ingredients such as gold leaf and Mexican cacao powder and prior preparations of spice mixes (or as Santtini calles them, "Star Dust"), it 'aint easy. There are a few basic recipes for pasta sauces, risottos and meat dishes which you can choose to keep simple or you could, as suggested, drop a "U-Bomb" (that's umami bomb) on it by adding the additional listed ingredients.

The copy style as you may have gathered above is er, different. The sections are not titled as you would expect in Starters, Mains and Desserts, but are instead organised into the elements of Air (I Was Raw), Water (I Was Cooked), Fire (I Was Burned), Earth (I Am Tasty) which was inspired by a quote from Mevlana, creator of the Sufi branch of Islam. The rest of the titles are puntastic with gems such as Whipping It Up (basic mayonnaise), Hey Pesto!, Rubbing It In (basic rubs) and Love Me Tender (marinades). These little copy nudges, winks and titters are peppered throughout the whole book and did start to grate by the end. At times it felt like I was trapped in a room full of flamboyant, rich, nipped and tucked yummy mummies tanked up on white wine. 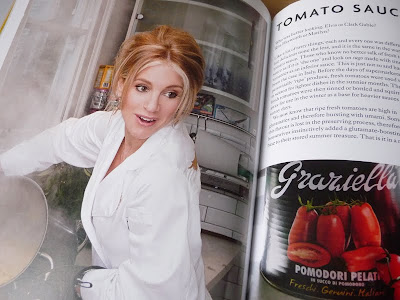 Now for the design! I can say with 8 years of designing under my belt that visually it looks like this book may have suffered with a bit too much client intervention. The intention to create something different is there which is great, I'm an advocate for thinking outside the box if it's relevant. But you have food displayed like make up in glossy fashion mags on one page, Sex Pistols fonts, pictures of Elvis, retro advertising, utterly random quotations and snaps from the family album making up the chaotic pick n' mix of someone who is trying to shoehorn in way too many ideas. The food styling itself is inconsistent and fails to tell that "story" a cookbook thrives on. 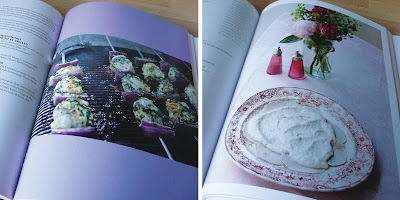 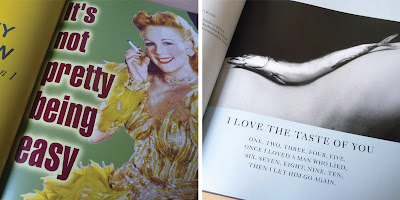 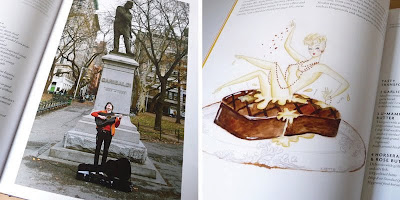 I usually like to cook something from a book to form part of my review but for the first time I really struggled to choose something I was eager to cook. I almost used the globe artichokes I had in to make the rather spectacular gold-leaf topped Gino Santin's Carcoiofo Santini but found comfort in my trusty Silver Spoon cookbook instead.

Strip it all of the glitter and fluff and there are probably some wonderful recipes in here. This book was not what I was expecting and I doubt anyone who judges this book by its title will either. I actually think naming this book Easy Tasty Italian is quite misleading.

I have had the book for a fortnight now, picking it up and flicking through, trying to understand it, trying to find some inspiration in it but it didn't happen. I'm sure some people will adore the unusual slant this book and I do recommend a flick through in a book shop to see if it is to your taste but for me it's just a concept gone cuckoo.

Easy Tasty Italian is published by Quadrille publishing and costs £20.00

I received this copy from Quadrille Publishing for review.
Tweet