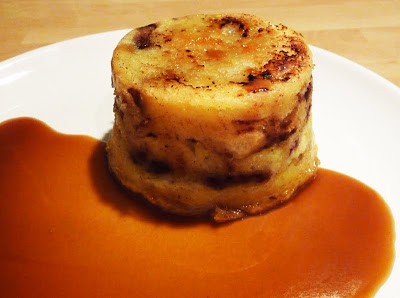 Nothing says "I love you" more than cooking that persons favourite dish, especially if you don’t like to eat that particular thing yourself. Mr. GF is the lover of all puddings stodge. The heavier the better. If you could use it as a brick, super. Jam roly poly, spotted dick, treacle sponge. That sort of thing. The thing I can take or leave. But it was our 11 year anniversary and they say you have to do something nice for the other person and all.


Bread and butter pudding was something I had once may moons ago at school and never wished to ever eat again but flicking though one of my many gifted and unused cookbooks, I came across a really nice sounding version of it. Instead of a huge sloppy dish of the stuff, these were made in individual ramekins, layered with melted down mejool dates and served with a sticky toffee sauce. It was time to get old school.

This recipe was found in the Great British Menu cookbook which accompanied the BBC2 programme, in which chefs competed to cook for a big finale banquet. I have owned this book for 3 years now but have never really been inspired to cook from it, probably because it’s quite “cheffy” and who the hell has time to flambee individual strands of orange zest? But the puddings in this book are rather good and quite simple compared to some of the mains.

This bread and butter pudding by the chef Simon Rimmer has made the cut into my sacred permanent file. It was so delicious and incorporation of the sticky dates worked perfectly. The toffee sauce was very sweet but on the right side of naughty so you end up licking your plate (or is that just me?). Also as the ramekins couldn’t hold much custard, it was firm and didn’t have the gloopiness that I used to associate with this pudding.

Method
Place the dates and bicarbonate of soda in a saucepan and just cover with water. Simmer gently until the dates break down.

Butter the bread, then cut each slice in half to make triangles. Layer the bread and dates in six buttered ramekins, starting and finishing with a layer of bread.

Beat together the whole eggs, yolks, seeds scraped from the vanilla pod and sugar in a bowl. Heat the cream to scalding point, then pour on to the egg mixture, mixing well. Pour over the bread and dates. Leave to soak for at least 20 minutes.
Preheat the oven to 175C/Gas 4.

Set the ramekins in a roasting tray filled half-way up the sides with water and bake for 16 minutes or until the custard has set (mine needed a little longer than 16 minutes).

To make the sauce, simply combine the butter, syrup and sugar in a saucepan and bring to the boil. When smooth and dissolved, remove from the heat and stir in the cream. Keep warm.

Sprinkle the top of the pudding evenly with demerera sugar and caramelise under a hot grill or blow torch.