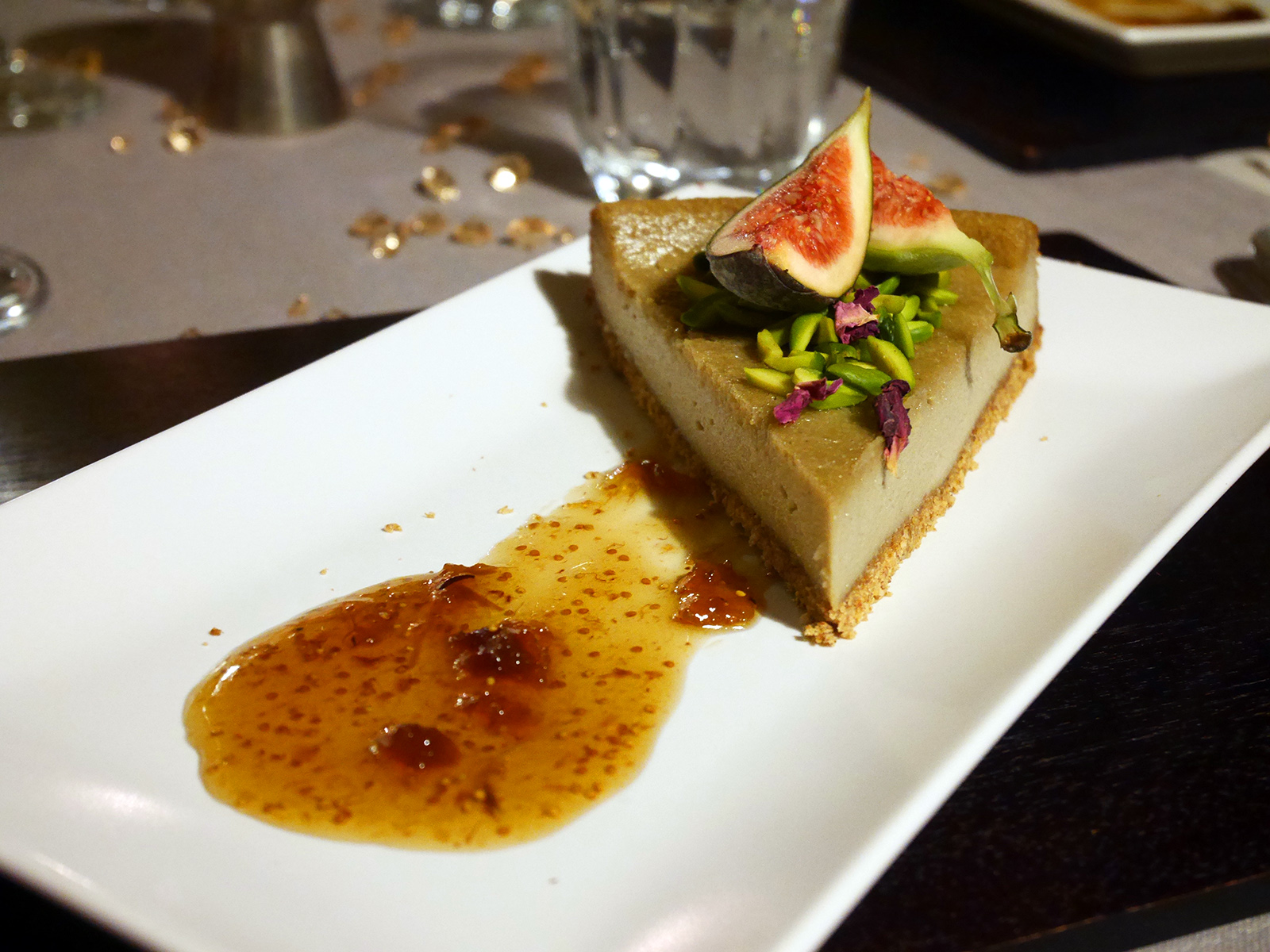 I'm no stranger to the dinner party (still sounds so very 1970s doesn't it?). As soon as I bought my first tiny shoebox flat in Brighton, the kitchen, with about 2 inches of work surface, was thrown open to guests. Heavily laden with ingredients, I'd come home from work on Fridays and start preparing that whole evening and following day. Friends would be shoe horned in, Lord knows how, and cheek to jowl I'd feed them up, course after course after course. I think a few of these spanned until the morning hours where we'd start breakfast service, before I collapsed in a heap. Chefs, I salute you.

So yeah, I blooming love a dinner party. Then life happens and the luxury of 48 hours food prep is frankly laughable, but my table is still host to friends and family; the love for convivial suppers still running deep, with me generally sweating it out in the kitchen.

La Belle Assiette contacted me to see if I'd try a private chef service with restaurant quality food. I love to cook so it's something I'd never thought of, but the lure of not doing any shopping, prep, graft, or cleaning up was an incredible pull. Imagine, I could just swan in like Margo Leadbetter with just table decorations and guest invitations to busy myself with.

The whole experience was great fun; choosing a chef online, reading through sample menus and seeing a professional at work in your own kitchen. I selected Marianne Hospel, based on her off-beat menus. I didn't want anything typically Mediterranean or British so was tempted by her eclectic menus.

Toying between her Dutch heritage menus and something Moroccan, a chat over the phone helped me choose the menu for six of us, with Marianne full of ideas, particularly in crafting the menu for my one vegan guest as not to make them feel left out or the rest of us compensating for anything. I liked how involved I felt in creating the menu too. Clearly a very experienced chef, she also asked some practical questions and came armed with equipment for any eventuality. 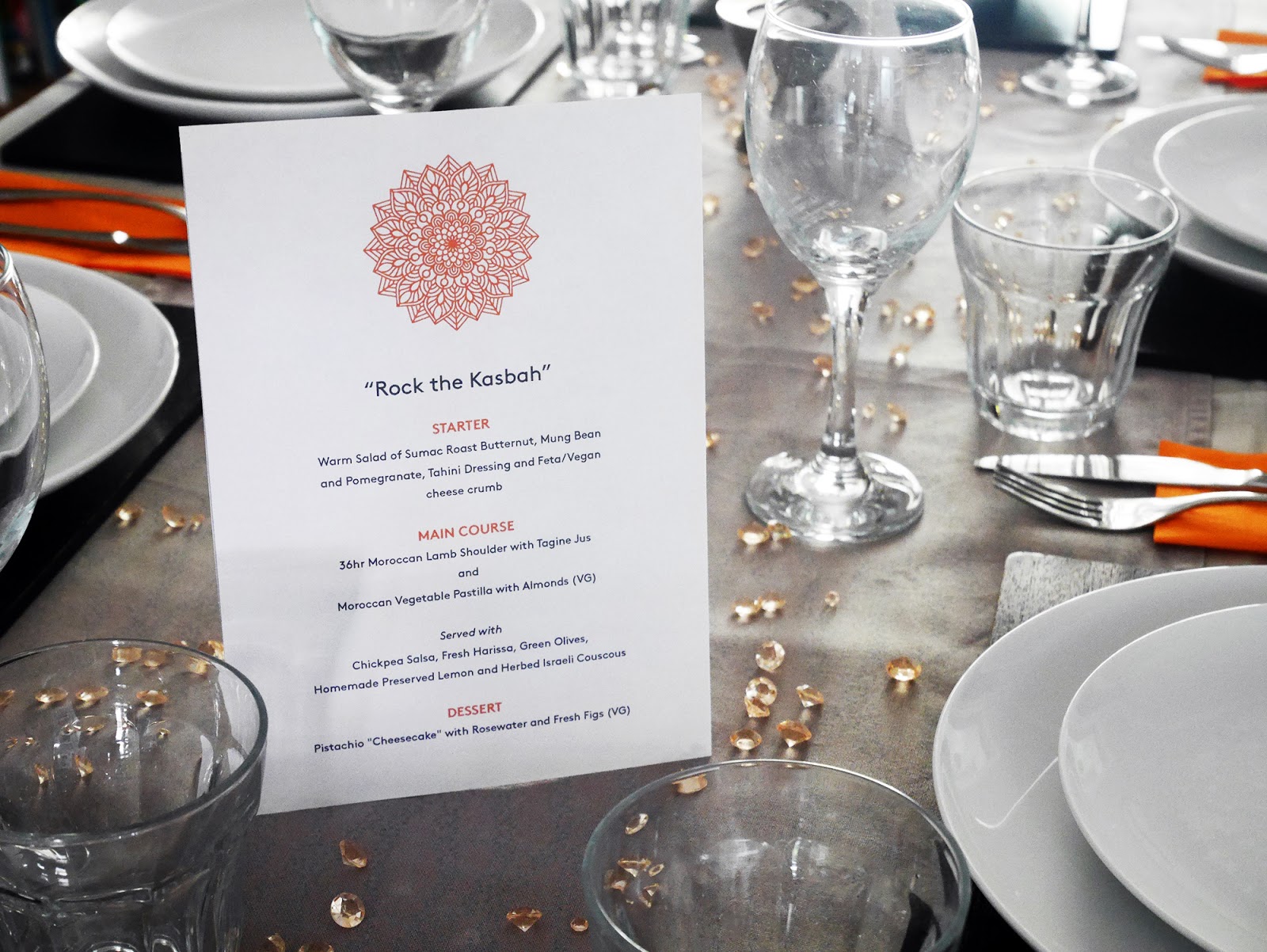 We went for her "Rock The Kasbah" menu, fitting for the hot evening, colourful enough for impress the girls, and reminded me of holidays in Marrakesh. 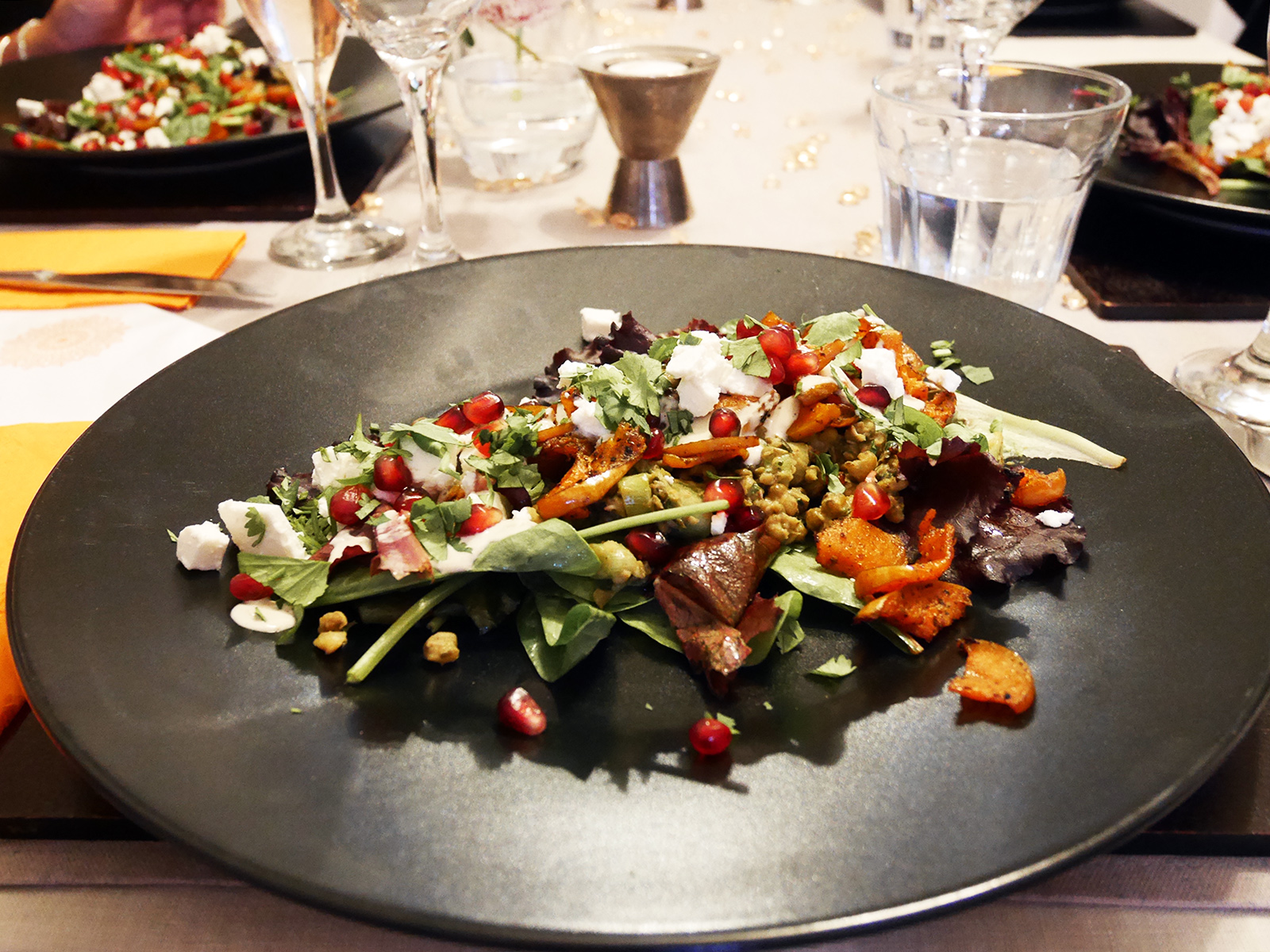 After an additional amuse with homemade spiced flatbread, we started with a bejewel salad of sumac roast squash, mung beans and pomegranate; the feta crumb being replaced with a vegan alternative for a seamless swap. 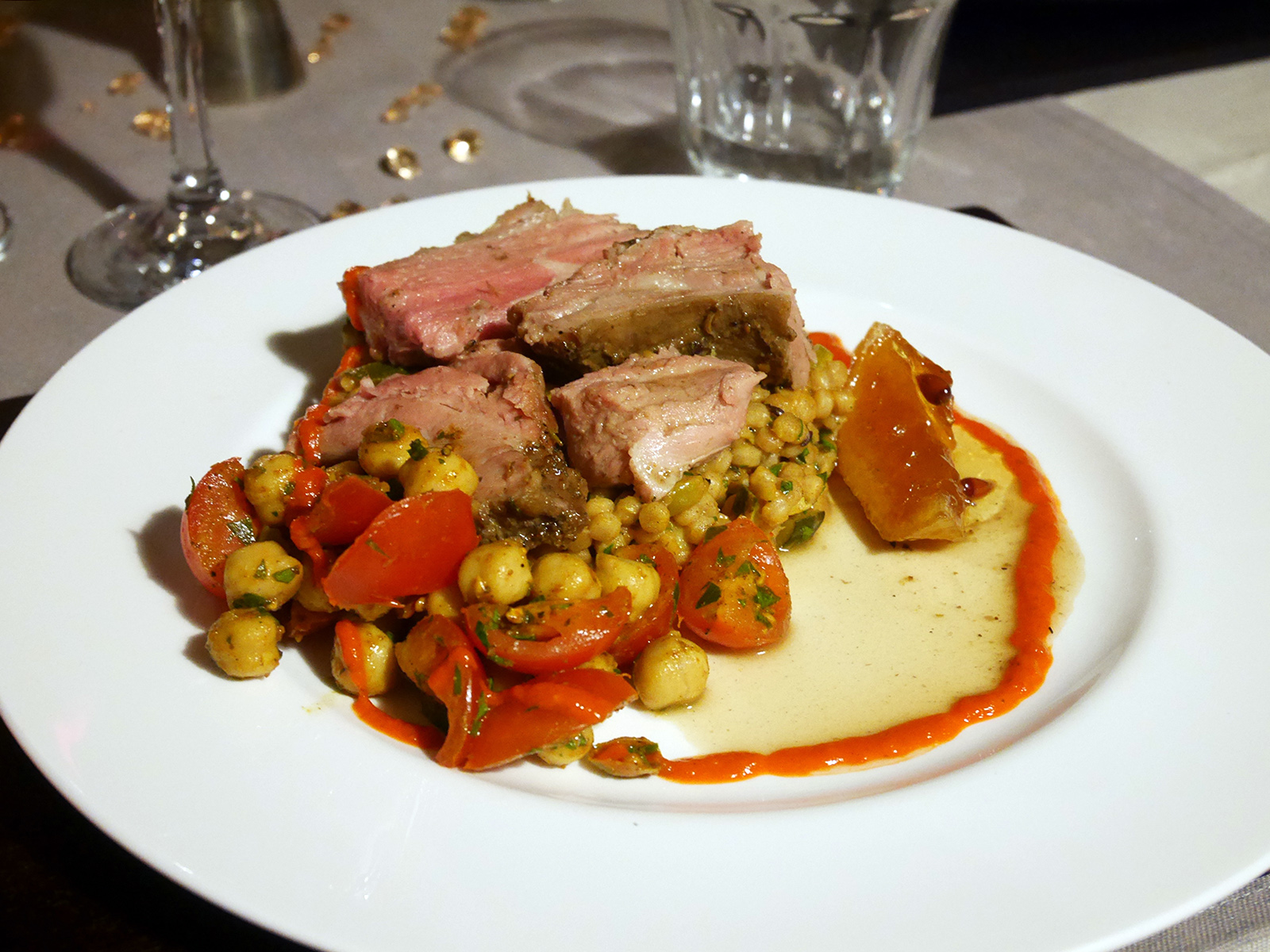 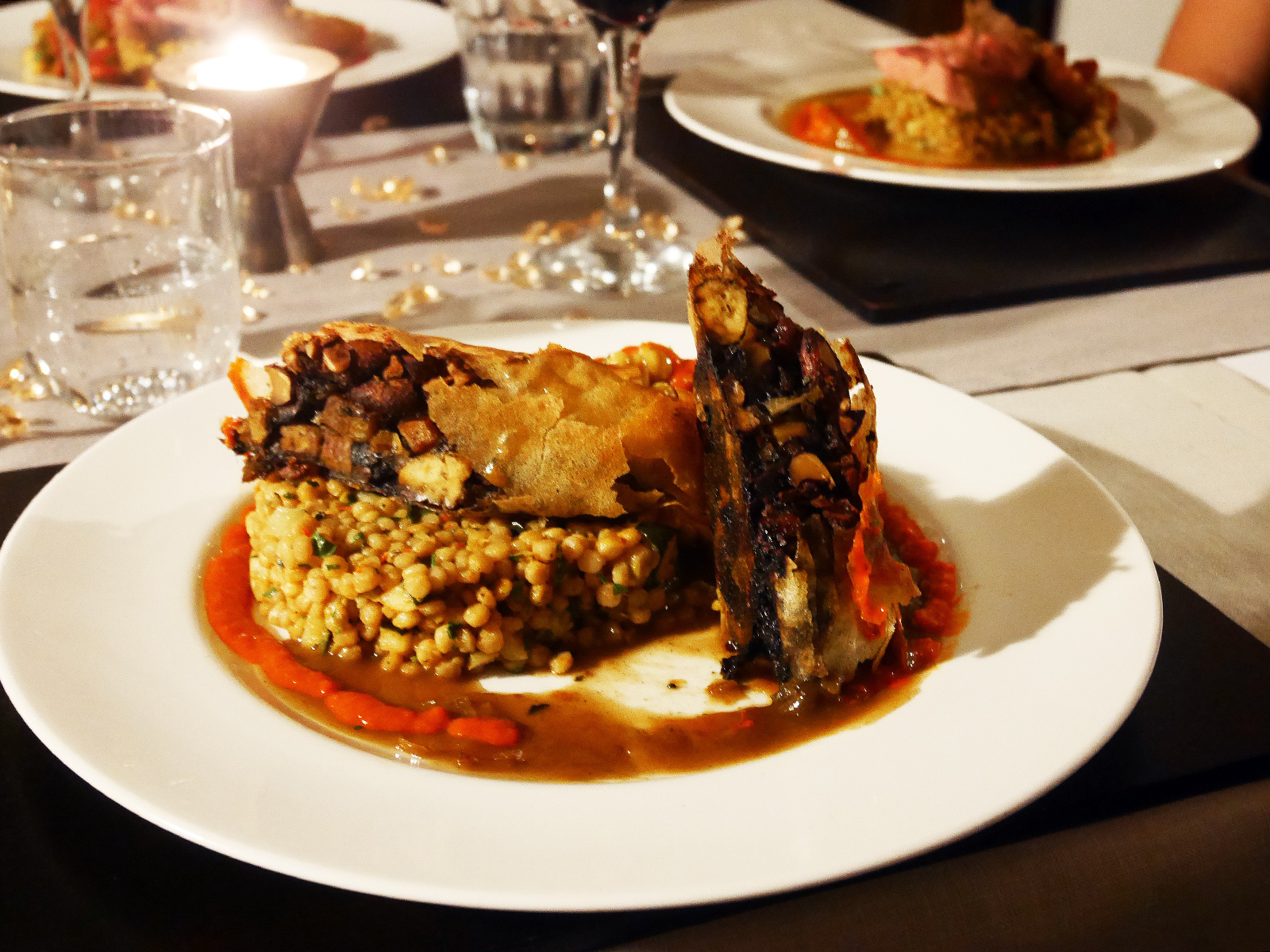 A 36hr Moroccan spiced slow-roasted Lamb followed, blush pink and succulent. The vegan dish was a vegetable and almond pastilla (far nicer than the boney pigeon one I did have in Morocco, dusted with a tooth-tweaking amount of icing sugar, as is tradition). We all had the accompanying herbed Israeli cous cous, chickpea salad with harissa, olives and the most incredible homemade preserved lemons. I adored all the levels of flavour here, which momentarily broke the incessant chatter of the table. 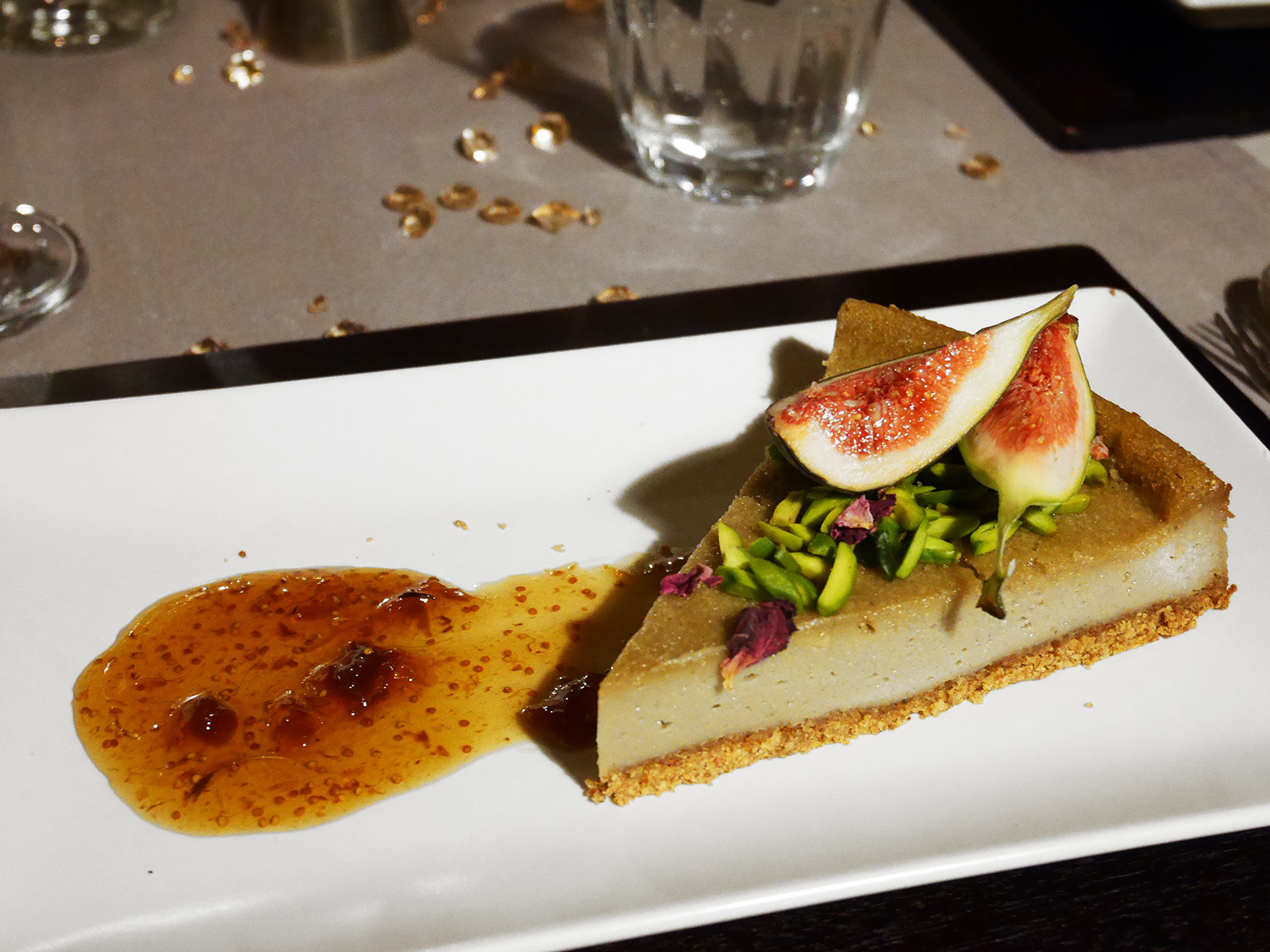 Star of the show, and I rarely say this, was dessert. A pistachio and rosewater vegan baked cheesecake with fresh figs. Utterly sublime and such a good vegan dessert that everyone was calling to the chef for the recipe.

I thought it would be strange and imposing having a chef in my home serving my guests but my need to jump in my own kitchen faded as soon as I'd popped the cork of the aperitivo to be honest. Marianne, was particularly lovely, intervened only when necessary and introduced the courses beautifully. It really did feel like a treat, even sat in my own home and my guests seemed to have had a great time too. It really was a fun experience and such a luxury not being lumbered with the washing up either. Marianne brought all the plates and cooking equipment with her (or used and washed some of mine).

It actually freaked me out a little bit coming downstairs the day after and everything being in its place. Normally, it's utter carnage in the kitchen the morning after!

The meal was delicious, beautifully presented, different and wowed my guests who had never experienced something like this in a home environment.

Also, one of my friends did make a really good point in that at £39 per head, this was actually something we could occasionally club together for instead of going out as we do. It's more relaxed, no-one is making you feel your time is up, you can discard heels and belts with gay abandon, and to be honest - £39 doesn't get you that far these days in terms of food and drink. It's also a smart idea for parents, those who can't get out so easily, or live in the absolute sticks.

We had a lovely evening and were still at the table, bleary eyed well past carriage o'clock. I'm sold.

I received this service without charge in exchange for an honest review.
Tweet