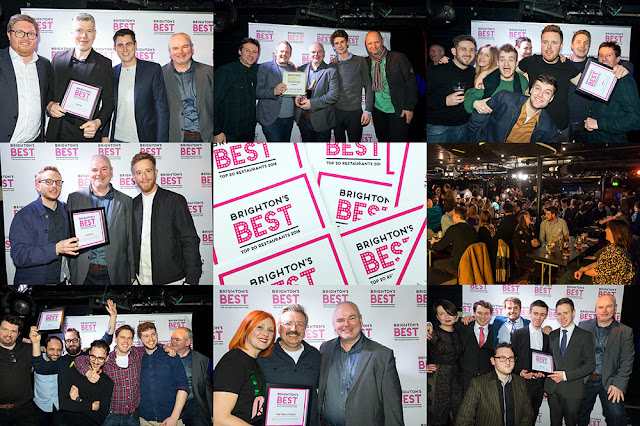 Monday saw the announcement of Brighton's Best Restaurant Awards winners, delivered, as we now expect, in a multi-media mash up of scandalous photos and questionably edited video footage. Half of Brighton's dining scene was insulted (in good jest) by circa 10 minutes into the event and Jeezzz, who knew host and co-founder of the awards Euan MacDonald could hold a tune like that. What an opening. If the 2019 awards format isn't an entire musical, in costume, I for one will be sorely disappointed.


The awards are voted for by almost 200 local "experts including food writers, chefs, restaurateurs and business leaders, all of whom boast an intimate knowledge of the city's restaurant landscape." This is reflected in a fresh list, which included many of the fantastic 2017 new openings that have seen the national critics sit up and take note of our little seaside city.

The evening feels like a genuine celebration of Brighton's frankly awesome restaurants and the people behind them. Each year the bar is getting raised that little bit higher - when I started the blog back in '08 (it's ok I won't start going on about 'nam) there were a handful of good restaurants, certainly not enough to fill a top 20 list. A decade later you're hard pushed to make a decision on where to eat there's so much great choice and variety.

What I also love about the awards is that it doesn't matter the style, cost or position of the restaurant. As shown by the top two spots; in second place is the phenomenal Bincho Yakitori, a Japanese Grill in Preston Street with prices starting from a couple of pounds a dish to number one spot (and I'm BEYOND pleased it got it), Little Fish Market. The cheers from the crowd when that was announced showed the support and camaraderie within the local industry, which was warming. That and most people were very drunk by then.

Here's the list to work your way through this year...forks at the ready. Link to recent reviews form me below. A few I have revisited off-duty and need to write up and the others are high on my to-eat list. Hard life!