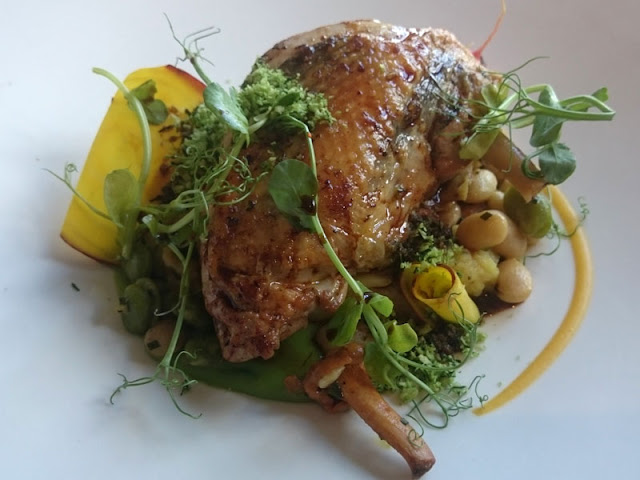 Whilst Brighton pub kitchens are hotly competing against one another with every street food trend or attention grabbing concept in the book (innovation and gimmick run a fine line), it's nice to be treated to some refined, high-end pub food for a change. And, God help me, food not served in either a dog bowl, chopping board or camping tin.

So it was a pleasure to find myself at the Earl of March in Lavant, just outside of Chichester, with gorgeous views over the Sussex Downs. It's only an hour drive from Brighton but we built up an appetite kicking through the autumn leaves and feeding the cygnets and Swanbourne lake in Arundel on the way. Nice. 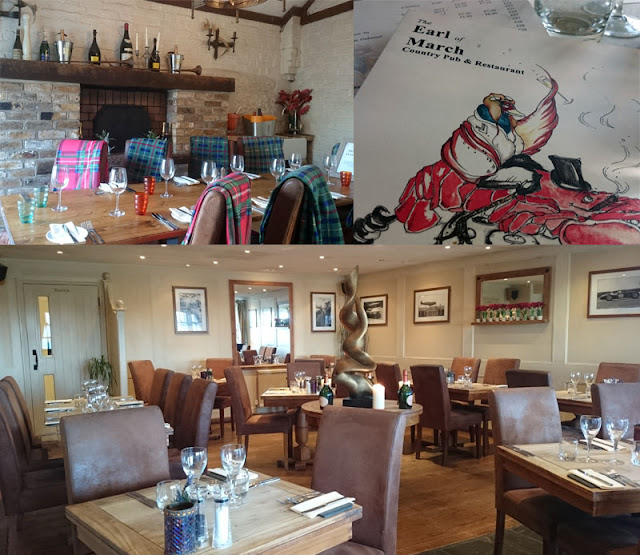 The pub garden was full of people cashing in on the last days of summer but we took to the formal dining room inside which was comfortably and tastefully furnished. There's also a cosy bar area too with just a few quirky touches that nod to their position at Goodwood.

This is at the premium end of pub dining (which you would expect from owner Giles Thompson who was formerly the executive head chef of the Ritz London) but I noticed a well priced set menu (two courses £19.50 or three for £21.50) so we ordered from this and the standard menu to compare. 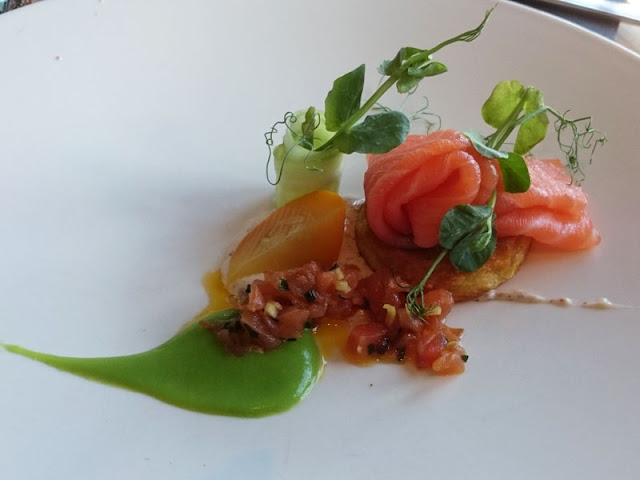 My starter of Spring’s of Henfield Oak Smoked Salmon is guaranteed to be delicious but they sympathetically and elegantly crafted it with pink peppercorn creme fraiche, a light potato bilini and pickled cucumber to make the perfect light and fresh starter. 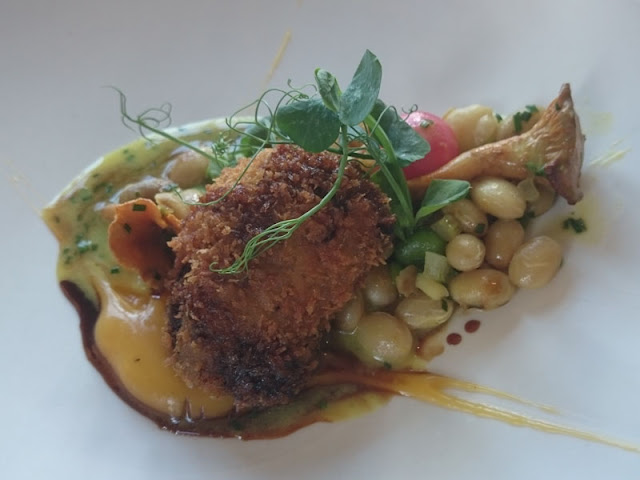 The new classic posh pub starter of pig cheek on the set menu was given substance with beans and the crunchy, crumb crust contrasted well with the sweet softness of the meat. A honey and sage sauce forced us to also sneak in a few crafty finger plate licks too.

I've always wanted Junior Foodie to try whitebait (I encourage anything with heads, ears, tails.. I don't want a squeamish child on my hands) thinking he may try one or two for novelty, but he wolfed down the entire portion which I thought was quite generous for a decider course. I snatched one and don't blame little chap at all for clearing the plate.

The main of guinea fowl was probably the most tender version I've tried as it tends to be quite tough. Again it was beautifully presented, served with complementary robust flavours from the oxtail pomme purée and roasted jus. It's exactly the plate of food I want to see in this sort of place. 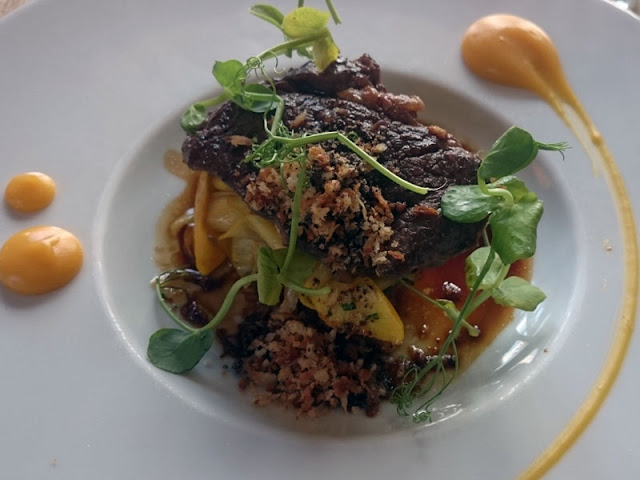 My blade of beef from the set menu was a little simpler, but none the less enjoyable with good flavour. I used to be a fillet girl, but have definitely seen the light with slightly less tender but flavour packed cuts. I adored the jus soaked classic boulangere potatoes at the bottom and delicate ribbons of yellow courgette. 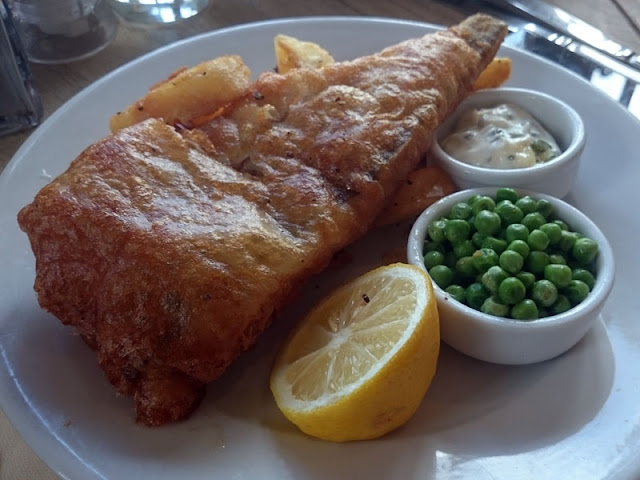 It was nice to see the kids fish and chips come out as a decent size and the rough cut chips were cooked and given a good shake before frying as they had the most delicious crispy edges. I may have stolen a few of these like the bad mother I am. 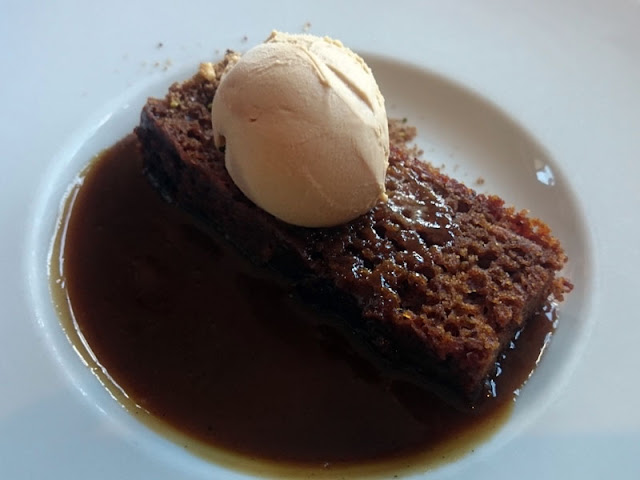 The dessert Mr GF was always going to pick was his staple sticky toffee pudding. I often find this dish to be teeth chatteringly sweet, but this one was nicely balanced and light with just enough naughtiness in the sauce to make it indulgent. 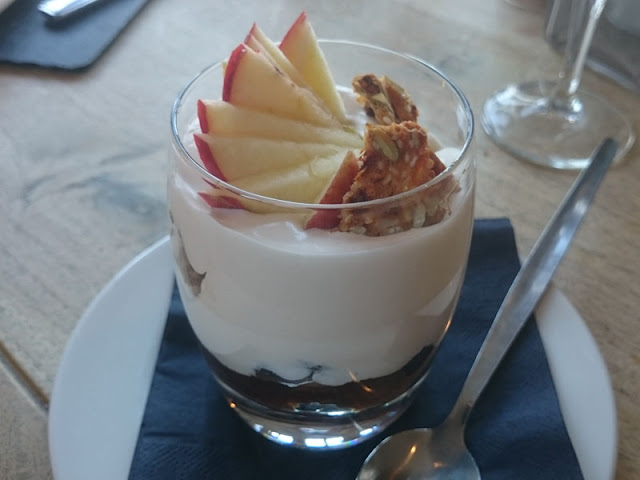 Not something I would normally go for was the Apple Compote. This was an early taste of Christmas with winter spices like cinnamon and star anise and a good hit of festive booze from the Calvados cream. The textures at the bottom layer were particularly gorgeous with plenty of crunchy caramelized nuts to contrast with the sweet reduced apples.

Food is clearly paramount at the Earl of March and I don't think you could complain about it at all. What I also liked was the presentation. Nothing was superfluous, everything has its place visually and for taste. Pub food in particular is generally suffering a phase of silliness at the moment. Yes, food should be beautiful but not at the mercy of taste and they hit the balance perfectly here.

The only quibble I had was service but I think we had a case of new girl on our hands with our waitress staring blankly at the till for a forever rather than look after the tables.We were also not shown the specials board, which with lamb rack and wild mushroom gnocchi, Yorkshire grouse and Hampshire venison with gooseberry gastrique on made me stick out my bottom lip when I noticed it later. I think she also forgot to add the kids meal but the kitchen, clearly powered on rocket fuel, managed to produce it in no time, without our own meal getting cold or the boy noticing and having a scale ten toddler meltdown. Later on we were served by other members of staff that were friendly, smart and efficient so in general, I think you'd be very well looked after here.

Although at the upper end of the price bracket for pub dining, the quality and location make it well worth the trip from Brighton. I wouldn't hesitate to return.

I was a guest of The Earl of March. Opinion and words, as always, are my own.
Tweet