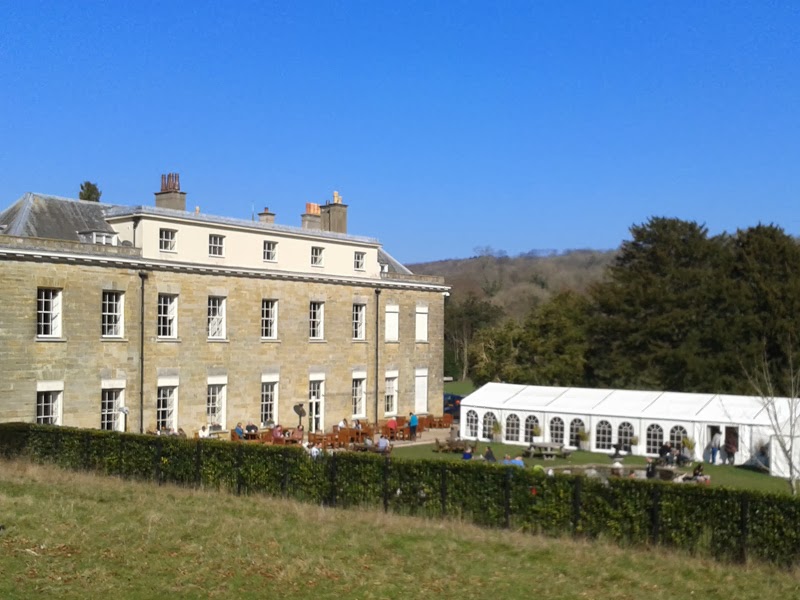 I've been meaning to get to Stanmer House for far too long. But if I'm honest, the heinous, shouty pub chain website has kept me away, making me expect laminated bangers and mash menus.

Here's an example of the menu for Mother's Day. "She's in for a treat!" and "Book early to avoid a Tantrum" slogans - I kid you not. And a breakfast menu that would be more at home down West Street on a hungover Sunday or a motorway service station. Either orchestrated by two design geezers in a loft studio somewhere or, more likely, two marketing geezers in a loft studio somewhere. What works for the other Whiting & Hammond pubs, clearly shouldn't be applied at this venue. Despite being taken over in 2011 by the chain, the interior has been more sympathetically renovated than the website and print collateral portrays and is modern and comfortable without detracting from the elegant 1722 heritage. 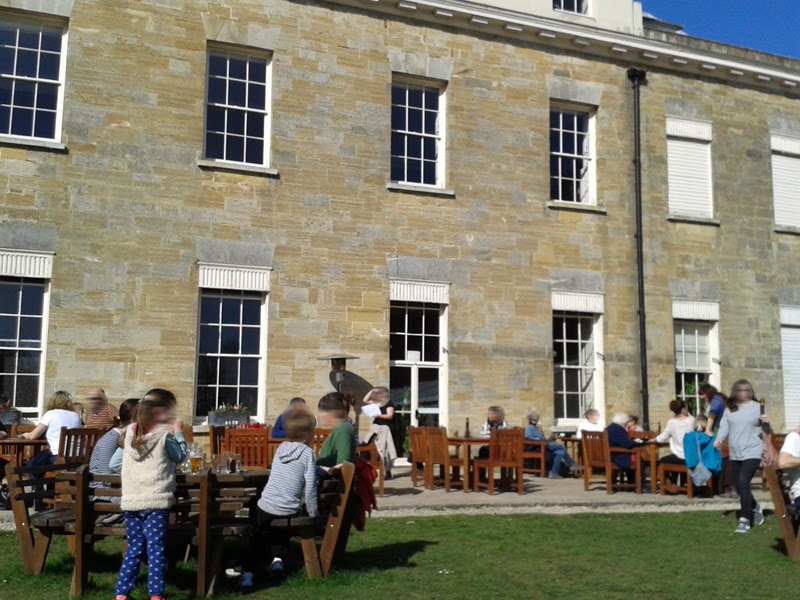 A jaunt across Stanmer Park on the first sunny day since, well forever, the outdoor dining area looked just too inviting to ignore. Walking through the heavy doors of the entrance the house is just stunning, there are cosy little nooks with open fires, a bar area or a more formal dining room to choose to dine in. But on a day as glorious as this, sitting outside is a must. Children (and dogs) are really well catered for with space to roam in, I can't comment on the children's food as they hadn't printed any menus yet. This was despite it being a freaking busy lunchtime and the sun was clearly going to bring in scores of diners. Duh. So I had to make do with a half blank waitress recalling what possibly was on the menu whilst being corrected by another member of staff. Ideal. So we kind of ordered haphazardly. 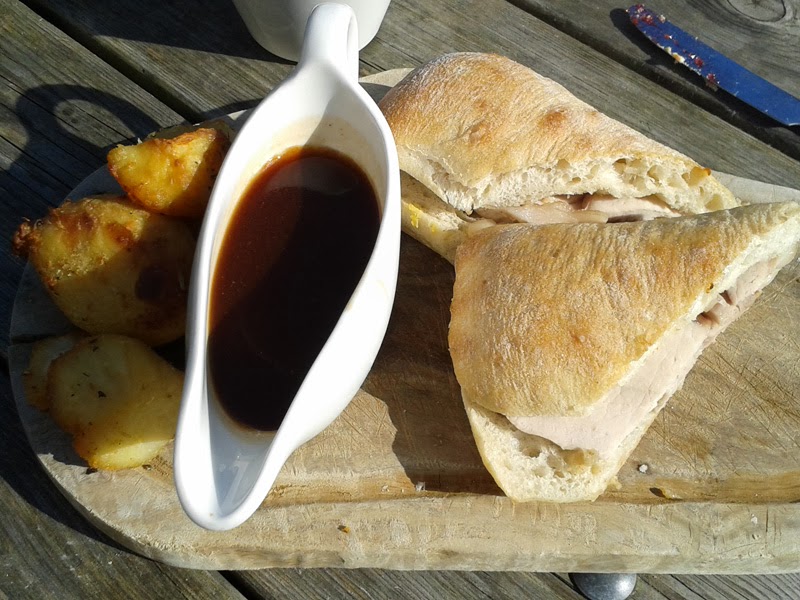 I finally did get to see a menu, which was huge and a clear nod that we are in pub chain territory, but there were some good ideas on it. It was a Sunday but we wanted a lighter lunch as we had dinner plans, and they do a roast ciabatta which is their roasted dinner meats served as a sandwich with roast potatoes and gravy. Now. I eat out a lot and see some pretty daft presentation materials but a gravy boat served on a twatplank wooden board is up there for utterly bonkers impracticality. I assume you are meant to dip the potatoes in gravy? Anyway, meat could have been better, there could have been something green to lighten the stodge factor, but yeah, as sandwiches go it's been elevated enough to be classed as a little more special. 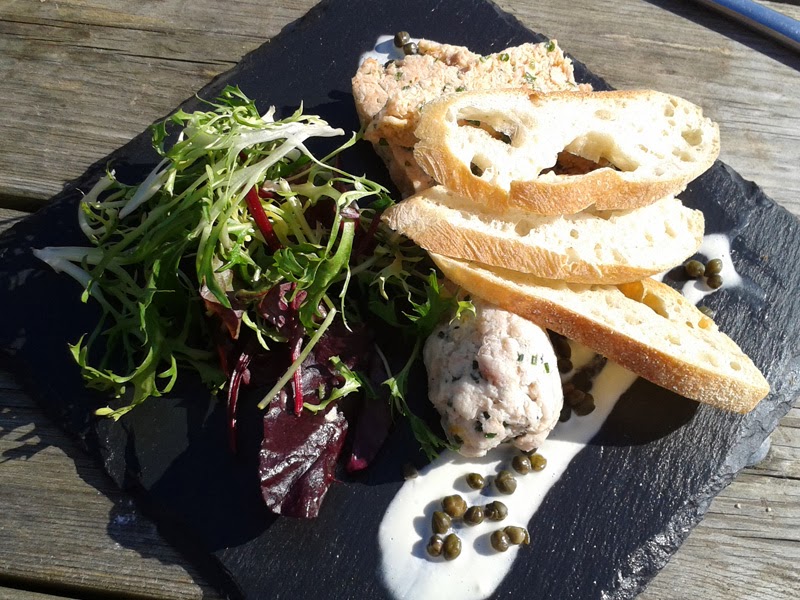 My choice of smoked salmon terrine and bream rillettes was a nice light option from the starters. Again, it was ok but the ciabatta toasts were almost stale, not enough of them, and served on my pet hate of slate. Watching the poor staff weaving around the large garden trying to find diners whilst keeping capers on flat slates was like some assault course inspired by Manuel from Fawlty Towers. Anyway, the bream rillettes were actually lovely, light and a good texture. The salmon terrine was enjoyable too and even though the salad wasn't dressed, the inclusion of it made the dish suitable for a light bite.

Generally, people seemed to be ordering the sausage rolls to wash down their chilled beers with but I did see a few roasts go out with huge Yorkshire puddings. Maybe inside people were ordering full meals, but really, with the sun blazing, I think everyone was giddy on vitamin D and wanting just drinks and nibbles. 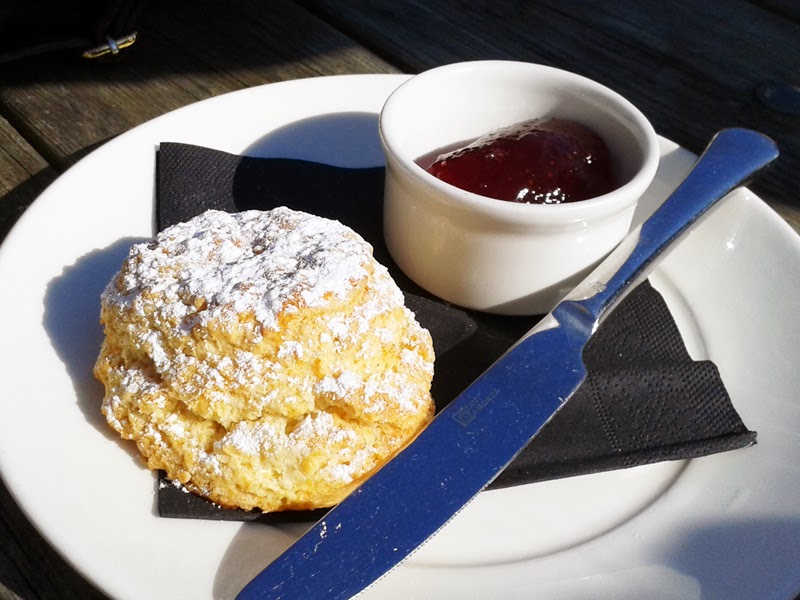 Junior Foodie had to make do with a plain scone alongside bites of our meals as I was worried about the wait time following my mathematical equation of (bumbling staff + massive queues) = horrific toddler meltdown². He just threw it down his neck and was more concerned with running round and round the pond, squealing with glee anyway. The scone wouldn't have me rushing back for afternoon tea but it was fine, although I did see a tweet of their homemade cakes that did look pretty good.

All the food was just about acceptable really so yeah, go along for a light bite at lunch or a nibble to keep you going on your hike across the park. Prices are a little high but you have to accept you're in wonderful surroundings. Would I come here for a special occasion dinner? No, of course not. Despite the amazing venue, there is too much that winds me up about the design, staff, slates not plates and manilla ownership of the place. But an hour or two spent in their garden in the sunshine, or tucked up inside in front of the fire on a cold winter's day for that matter, is time worth spending, even if just to soak in the atmosphere.

On a side note, the following (read below upward) is a prize example that highlights that this is a heritage property with a chain pub mentality. Nothing like protecting your brand with good PR, eh. Kerching boys, kerching.

Read Rosie's review of the full roast dinner here. (At least that was served on a plate but possibly the only redeeming feature.) 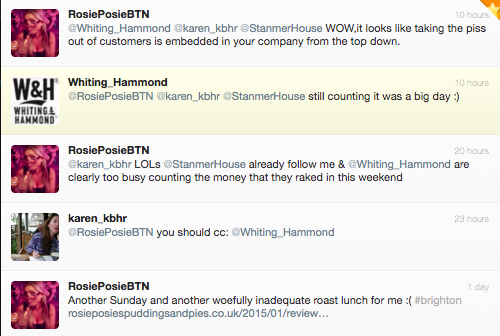