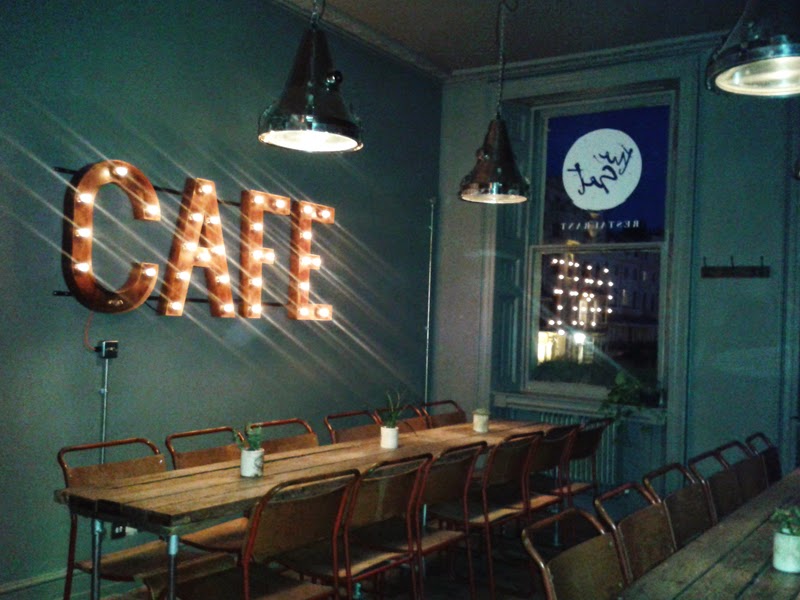 The dining scene in Brighton has changed such a lot in the past few years. Not only have we seen an influx of casual street food and pop up restaurants in pretty much every pub, there has also been a demand for something at the other end of the scale; refined, high-tech food that wouldn't be out of place in a lab rather than the kitchen.

And this is where The Set comes in, the eagerly anticipated restaurant from Dan Kenny and Semone Bonner, the former head chefs of the Gingerman and Ginger Pig. This is their first permanent venture, following a series of pop-up events and Christ, they have thrown everything they have at it. For work ethic, these guys get 10 gold stars. The restaurant sits comfortably at home within the Artist Residence hotel and also offers more casual food in the daytime as well, think seafood burgers with an unexpected twist.

I have to remark that the food offering at The Set is not for everyone. It's contentious, attention grabbing, ticks off every current food preparation trend in the book and will provoke and delight in varying measures. If you want safe meal and a full happy belly, then a plate of bangers and mash it is not. It's the sort of food that causes discussion and makes your palette work hard. The menu is written de rigueur as ingredients rather than dishes, so you also have to be happy with an element of surprise. And I think this is exactly what the chefs want. They want you to talk about their food and dare I say it, want to stir things up for recognition from the offset. 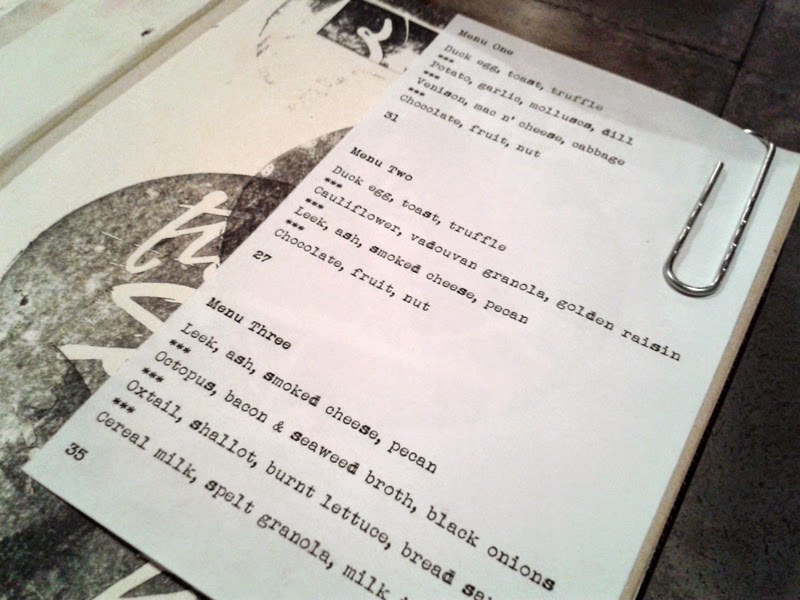 Prices are surprising, in a good way. There is a choice of three set menus of four courses which vary from £27-£35. (Let's face it, you could easily spend that per head in one of the chain restaurants for a full meal if you wanted to torture yourself.) Wine flights to match each course are also available for around £15-25 which is a really good idea and again, the typical price of a bottle of house plonk in other places. This is great news at it makes a restaurant like this inclusive to a wider range of diner, maybe the younger audience which can only be a good thing.

It's too early to really comment on the food in detail, so this is more of an overview than a review as such. New restaurants need some time to really find their feet but on the whole I was impressed with how smoothly things were running even though the paint was still drying here. 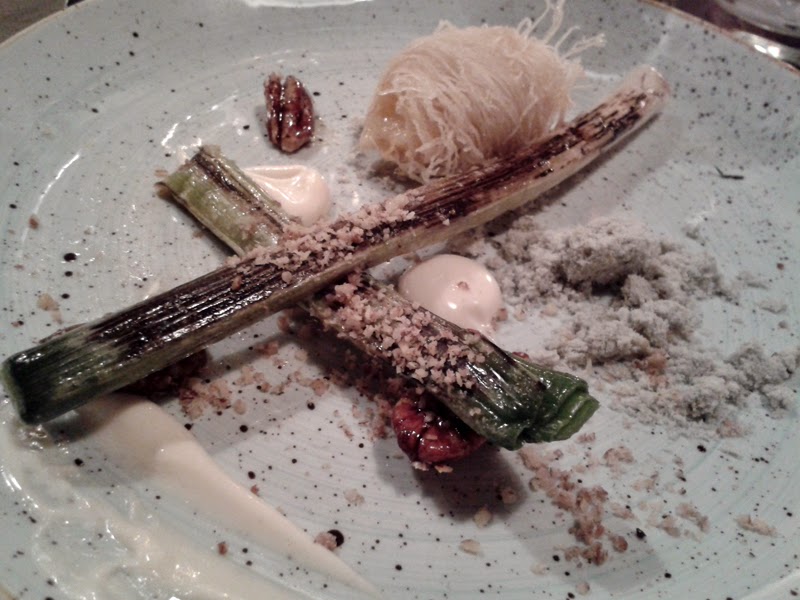 Highlights included a dish of baby leeks with an angel-hair pastry filled with cheese and honeyed pecans. There was also a little pile of kale powder which melted on the tongue, much like Coffee Mate. I think a chef once explained it to me as a pine oil preparation but aside from that, I loved the clean, fresh flavours on the plate. 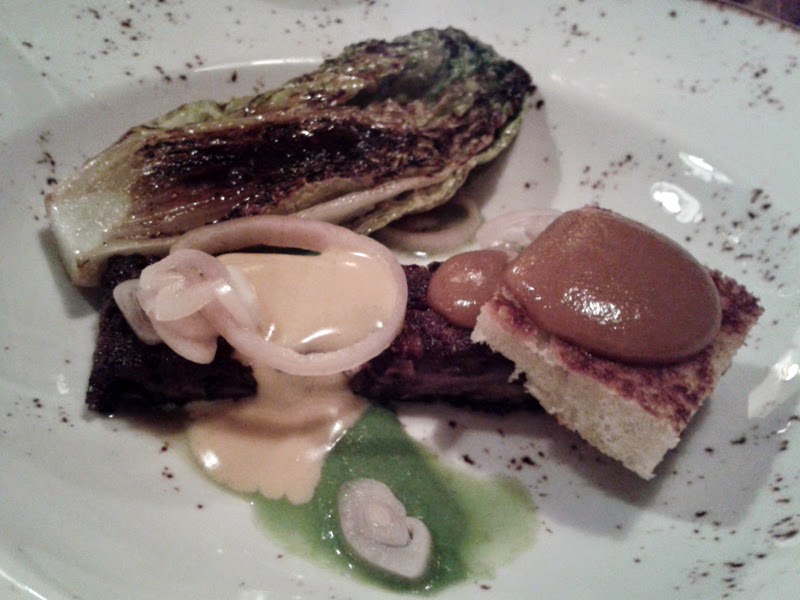 The slither of compressed oxtail was also very good. Crisp on the outside and meltingly soft in the middle. This was the one dish that was designed to be harmonious with each element complementing rather than contrasting; sweet burnt lettuce, three purees, lightly pickled onion and a small piece of toasted brioche. 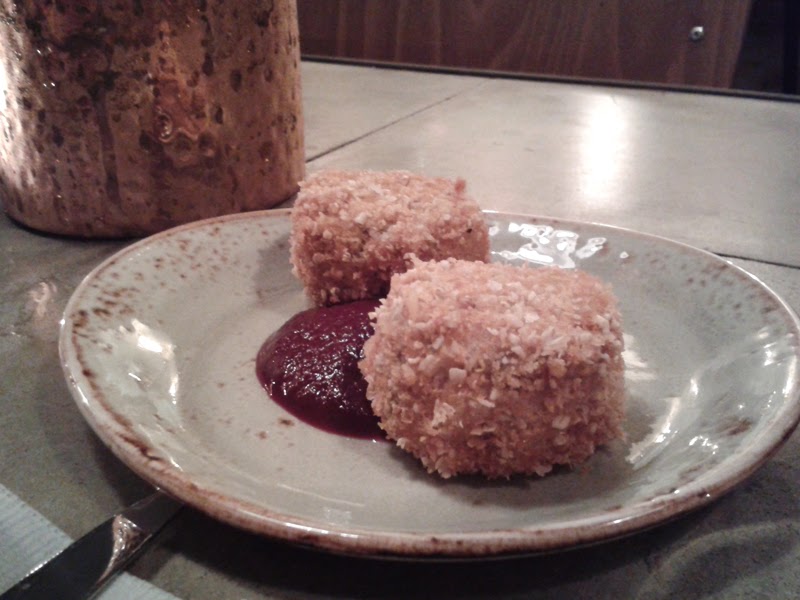 The amuse actually deserves a mention. I really loved the shredded "chicken nuggets" and could see these on the daytime menu with lashings of the red cabbage ketchup they were served with. 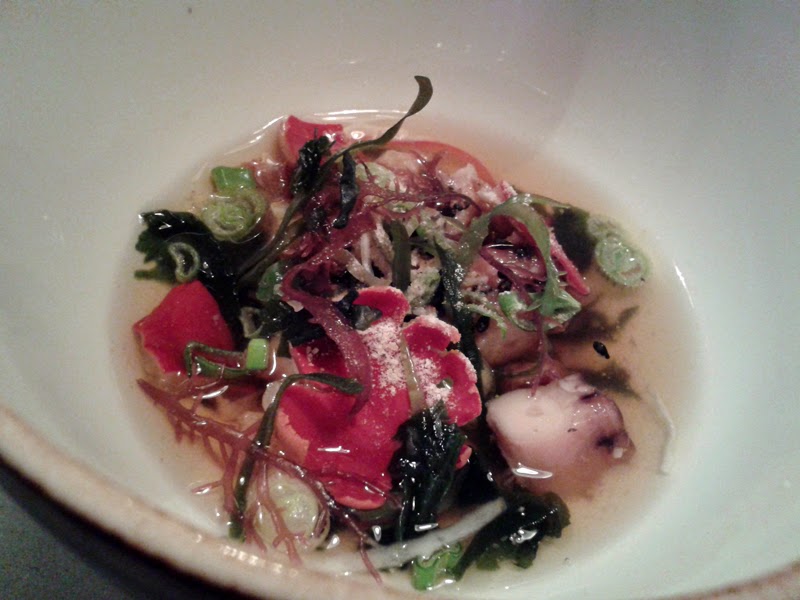 It was a shame that the octopus was lost in the seaweed broth as there was quite a lot going on with other ingredients. Pretty to look at though. 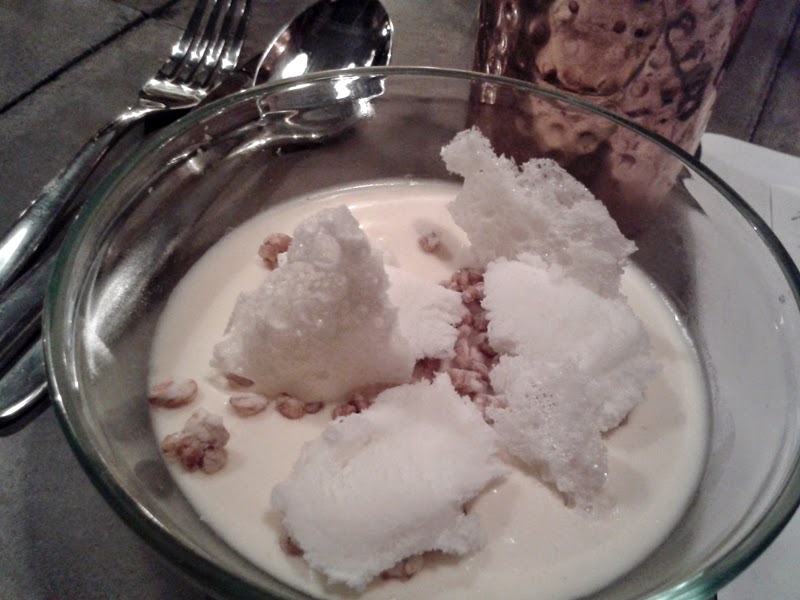 Maybe the dessert of cereal milk, spelt granola and milk ice cream wasn't for me. Even as a student I didn't eat cereal past 8am, and it's not something I want to see in my dinner. Granola is fashionable (and irritatingly, more so in meat dishes) so it's a trend I'm going to have to ride out. I did have writer Patrick McGuigan on my table that polished it off with gusto though. I will say the dehydrated (and boy, do these guys sure love to dehydrate!) milk shards and milk ice cream were a nice textural and temperature contrast.

The other thing I'm not too sure about is this trend for open kitchens. Chefs sure like to be seen and heard these days wielding their craft on the pass and to be fair, I kind of like the theatre. Luckily I just had a trip home but if you are heading out after, then you will smell like you've just done a shift in the kitchen yourself.

Design and interior wise I was a big fan. They have hit upon a really unusual combination that I don't recall seeing anywhere else but it really works. Concrete tile topped tables, industrial lighting, distressed reclaimed doors and corrugated metal panelling. They have teamed this with American diner, bluesy music which relaxes the whole place and the waiting staff are young and bouncingly enthusiastic. Apparently you will be as welcomed here in jeans and t-shirts as you would dressed to the nines and that's what the environment evokes.

And yes...plates. It seems I only ever talk plates but The Set have chosen really well with elegant designs and colours that show off the food. This is, happily, a slate free zone by the look of it.

So there we have it. The Set shows great promise. I'm sure they will be incredibly busy for months to come as people clamber to get a reservation at one of the limited number tables they have. I'd certainly be keen to return to try the more casual day time menu at The Set of Scales when it's fully running, as much as standard burgers bore me I'm sure their version of a dirty diner will be anything but standard. 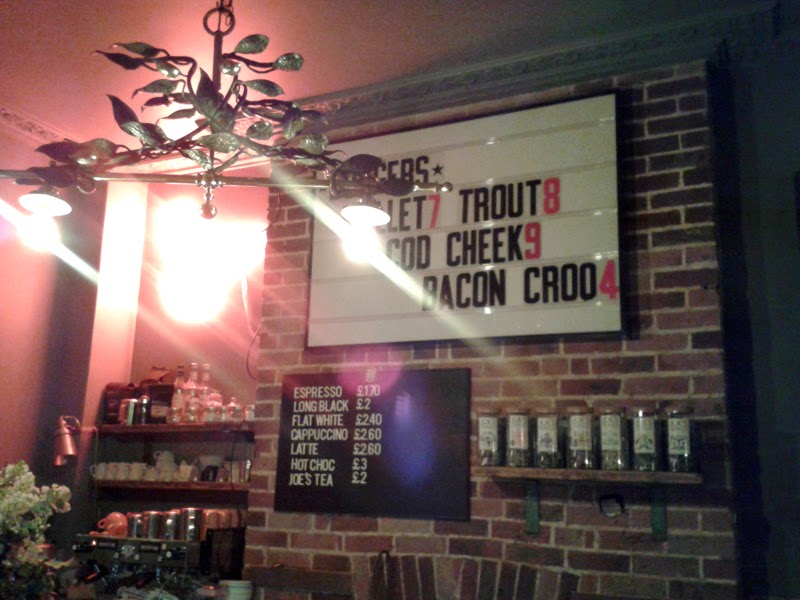 I was a guest of The Set. Views are my own.
Tweet