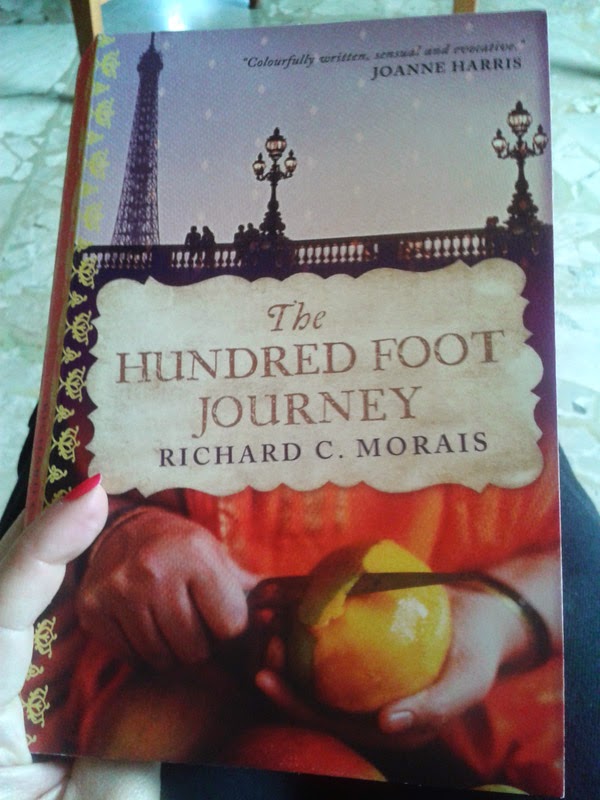 You know those books that you never want to end? I positively mourned finishing The Hundred Foot Journey. I saved it like a precious Willy Wonka chocolate bar to take to Italy with me, thinking that I'd be able to catch snips of it here and there over a busy fortnight with the family but no. I devoured the lot in just a couple of evenings.

The Hundred Food Journey tells the story of Hassan and his family who, from painfully humble beginnings, manage to build a successful restaurant from the ground up in Mumbai. The family embark on new beginnings after heart-breaking tragedy strikes, moving to a brief, grim stay in England, then ending up surprisingly, in the small French village of Lumiére. There they open another vibrant, loud and joyful Indian restaurant directly opposite a reserved, traditional, two starred Michelin establishment. They are met with a frosty reception from proprietor Madame Mallory, who begins to find any way to get her new Indian neighbours expelled from the village. Yet after recognising a rare talent in Hassan, she eventually becomes his mentor and the key to his future success.

Most people should enjoy this book, although the latter half, which is dominated by French haute cuisine, the questionable Michelin grading system and chef name dropping is probably more suited to those with a strong interest in food. But the wonderful clash of cultures weave a passionate, emotive story throughout the book. Subjects of food, tragedy, politics, family relationships, romance and a man's struggle against his race and culture to make a success of his talents in a foreign place ensures your attention is grabbed from page to page.


What I really appreciated about this book was the rich and colourful writing style. Descriptions of food and flavours were so vivid, a photo would not do a better job of translating the image and taste of the dishes. It's certainly given me a need to discover more of India's food and an invigorated appetite for my upcoming visit to Paris. Also well crafted are the book's key characters. Almost all of them are penned with such detail; their quirks and idiosyncrasies, that you can't help but empathise with each, even those portrayed in a negative light.

The recently released film version has been received with so-so reviews (more of an amuse-bouche than a hearty meal, say The Guardian) but I think the book, as always, is best.

An absolute must read.

The Hundred Food Journey is published by Alma Books and costs £7.99