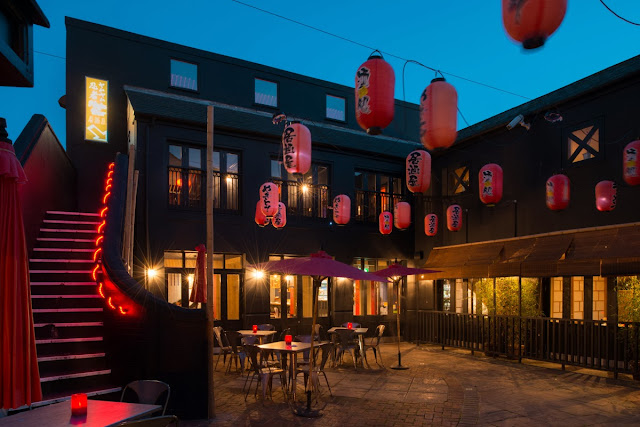 Having now been to Yum Yum Ninja a few times, it's great that the food still excites me. I love the opportunity to graze through a menu and YYN allows you to do just that, ordering dishes and snacks as you go along. There is so much to take in so am always appreciative of the snack they give you to leisurely peruse the menu with, this time dramatic squid ink and tapioca pearl crackers with pickled cucumber. Although the cocktail menu is limited in the restaurant (wider choice from the bar upstairs), it was nice to ease into the evening with a Rose and Lychee Fizz.

I can only apologise for the bad food photography throughout this post as the lighting was low for romance and mood and we were on a shared table. I always feel a bit of a dick photographing my food at the best of times, so I avoid flash and haven't purchased an enormous DSLR which, whilst improving restaurant food shots, would make me feel an even bigger dick. For reference, the food looks like this: 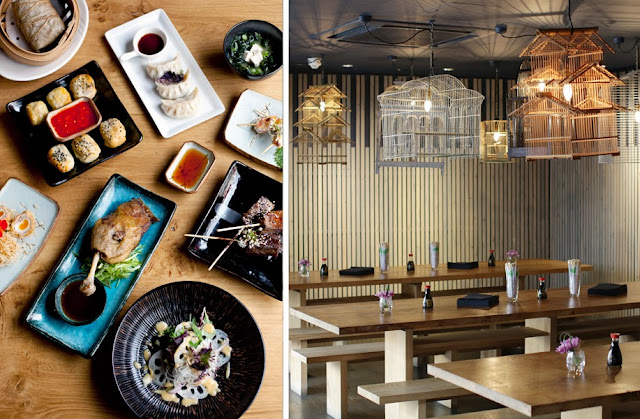 I tried so hard to only order new things from the menu on this visit but the Bo Ssäm Ninja beef is a drug I just can't refuse. Marinated and cooked for 24 hours, the texture is almost fragile it's so tender. No wonder they give you lettuce leaves to wrap around it as it would fall clean off a fork. At £9.50, it's also a bargain. I ordered it without even asking Mr Graphic Foodie, who was on his first visit here, if he fancied it. I just watched his wow reaction after the first bite, then warned him if he had more than precisely half of it he was DUST.


This is somewhat a signature dish for YYN as well as their double cooked pork belly steamed buns, which they also sell from their street cart. Again the treatment of the meat in this bun is superb, fall apart and rendered to perfection. Add a poofy, light bun with plum sauce and that is one hell of a sandwich. 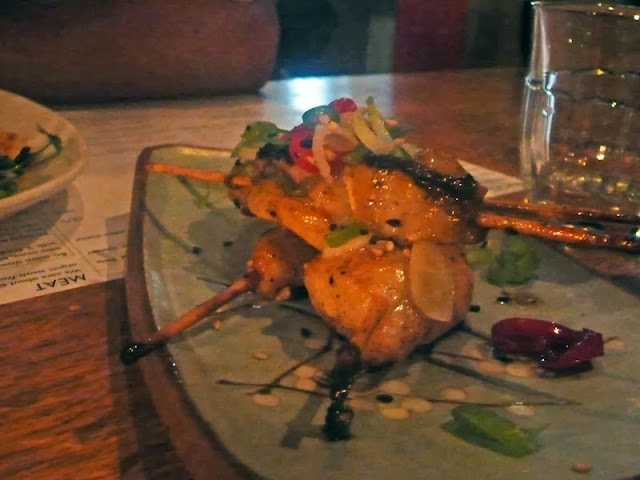 Having tried most of the meat dishes now, I would say you could safely order anything from that part of the menu. But the fish is supposed to be fabulous here so had to try a few of them. Unlike my last visit, we ordered quite a few of the smaller items like these Monkfish Cheek Binchos. And what a highlight they were. Sweet, soft, sticky and succulent. I only regretted not ordering the larger portion.

The Sweet Cured Mackerel Kaiso was so beautifully presented, adorned with minute colourful flowers and elegantly cut vegetables and seaweed. Sadly it was the biggest let down of the evening, suffering a little of style over substance. The texture of the mackerel was just too slimy for me and the accompanying items on the plate lacked any real flavour or cohesion. 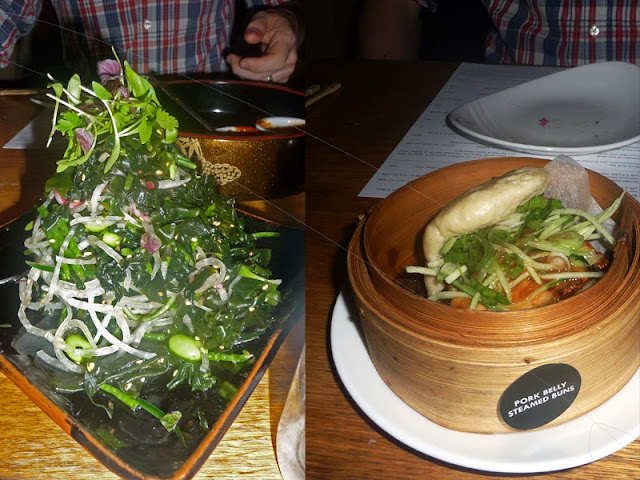 Happily we moved swiftly onto a nice little Wakame & Sea Vegetable Salad. Interestingly the vegetables and herbs are grown by a Lewes based company called Nama Yasai, who specialise in Japanese vegetables. With a short growing season and lack of pesticides and the like, they create the often unsung heros of the menu. I remember the vegetable dishes being exquisite last time too.

We finished the savoury courses with Crispy Duck Wontons with Tonkatsu sauce which formed the perfect full stop before desserts.

I'm gutted that I again forgot to order the Alaskan Black Cod which is pricey at £15/£30 but supposed to be worth it based on the texture alone. Next time, next time. 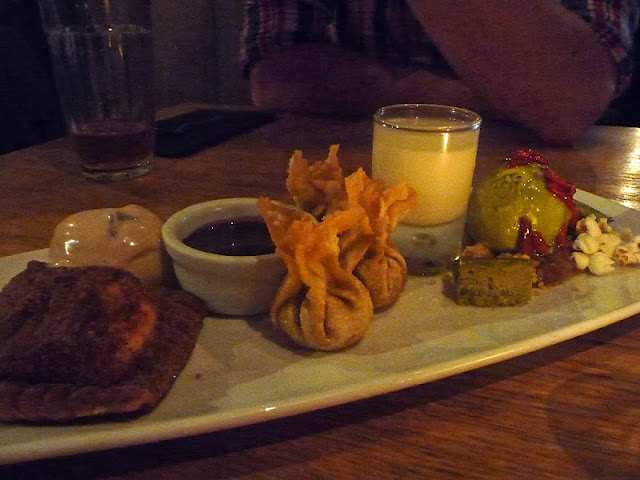 I have to admit I always struggle with Asian desserts as they are often not to my taste, but I was pleased to see the dessert tasting platter for the indecisive. The best item had to be the jammy little plum pie with delicious cinnamon sugar coated pastry and the toffee wontons were nice to dunk into the chocolate sauce. Normally I can give or take anything green and wobbly but the tofu mousse was perfectly pleasant with green tea ice cream dotted with goji berries. The rosewater and honey panacotta was the only low point on the plate, having not set and resembling a gloopy sludge - I hadn't even realised that was what it was until I asked, thinking it was some crazy Asian milkshake in 4711 Eau de Cologne flavour.

I do still stand by the my previous comments on the interior of the place, predominantly the upstairs bar, where I said it looked liked it had been executed by someone from Changing Rooms (which funnily enough turned out to be true, designed by Oliver Heath - oops). This time we were seated in the main dining room which is best although the majority of the tables are shared, something I am totally fine about but know some people may take issue with (mainly the ones that are made to sit next to me!). The mood in this area is lovely but the private rooms, if you are with a larger party, are worth going for as well.

Service can be a bit brisk so worth mentioning if you want to slow things down a bit, which I'm sure they'd be fine with as I don't think there is anything hideous like table turning or anything going on.

Yum Yum Ninja remains one of Brighton's quirkier restaurants, and the food is on the whole spectacular. If you haven't been you really must and it's somewhere I will want to go back to again and again to discover more of the items on the menu. Just with an obligatory order of the Bo Ssäm Ninja beef of course.

You can also catch their cart outside the restaurant or at one of the Street Diner events for a casual taster of their food.

I was invited to review Yum Yum Ninja.
Tweet