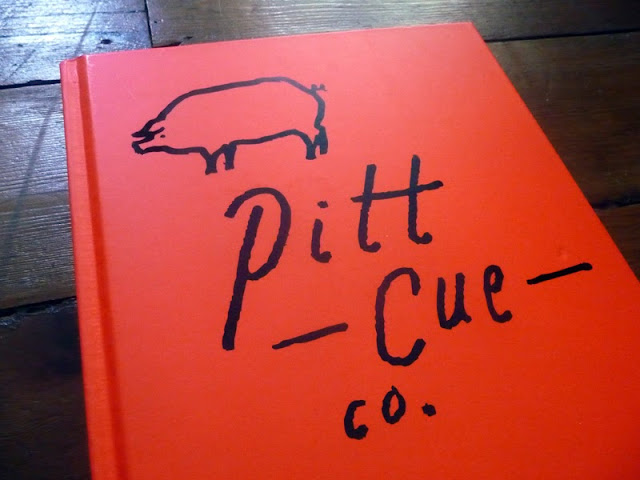 I don't think I've ever had a cookbook that made me want to rub my thighs when I looked at it. The unashamedly carnivorous images are bold, juicy and sometimes a bit slutty (yeah that's deep fried mac 'n' cheese in that pulled pork burger - wot you sayin'?). It's the sort of food you wouldn't mind getting your face covered in sauce for and makes you think you should call the butcher RIGHTTHISSECOND and order an entire pig, inviting absolutely noone to share it with. Down and deliciously dirty as well as refined decadence, there is a BBQ recipe for all occasions here. 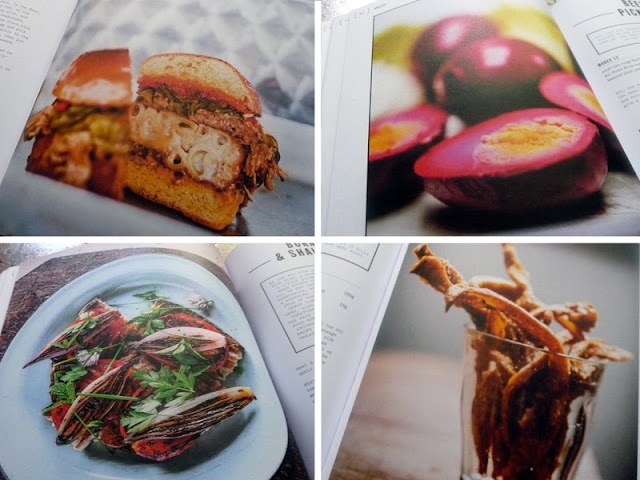 Pitt Cue Co. started life as an American BBQ street food trailer but has been one of the few to take it one step further into a restaurant in London's Soho district. In the book are the recipes that made their name as well as those that use all parts of the animal; the tails, ears, cheeks and skin which are ideal for the wallet and the belly. There is a really good section on smoking meat, meat cuts, sourcing and breeds and for the bourbon lover, a particularly excellent drinks section at the front which includes the on-trend Pickleback shot. 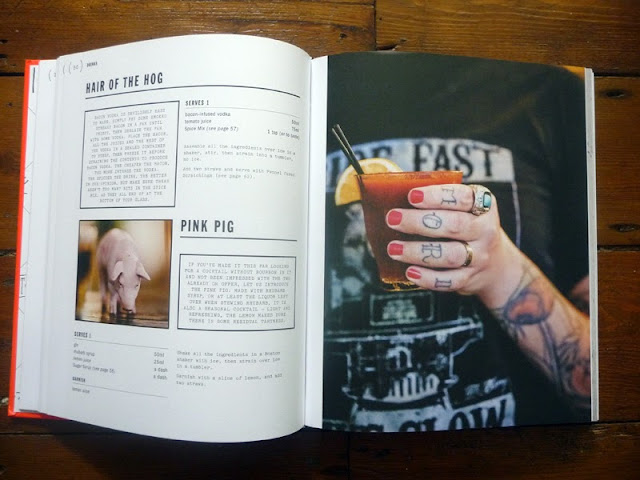 Vegetables aren't ignored either. There are some gorgeous treatments for sides and naturally a recipe for Kimichi as well as the all important slaws (Chipotle & Confit Garlic, Mustard, Green Chilli...) and a host of pickles (basic, seafood and even pickled hot dogs) plus sauces and rubs that don't just accompany the meat but are standalone stars in themselves. And to mop up those juices, some breads and cracker recipes too.

Although I don't commonly consider desserts as part of a BBQ feast, the recipes for Smoked Peaches, Bourbon & Cola Pudding or ice cream and donughts would make you trés popular and will redeem you for any incineration incidents you may incur trying to look after the BBQ whilst having indulged in one too may of the bourbon cocktails (who, me?).


The design is spot on and deserves a mention. The fashionable black narrow bold caps lettering with the typewriter font is strong and functional, with the odd hand sketched illustration to soften the look. Photography is clean and does very well to depict what is a very difficult subject matter to represent beautifully. I love a bit of fluro too, the cover is a real eye-catcher. Smart idea too, making it stand out a mile in the sea of cookbooks on sale.
Although the sweary blurb letter on the back cover would suggest that this book is a bit too cool for skool, it's a bit of a shame as the whole book is smart, simple but very well written and flows brilliantly. 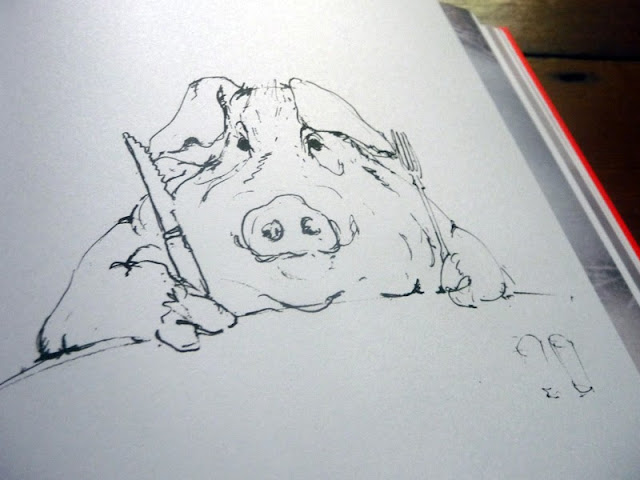 BUT - You'll see that this is a rare book review where I haven't cooked anything from it. Why? Well, firstly we ditched our neglected BBQ when we recently renovated the garden. Secondly, when I got a last minute invite to a BBQ, a lot of the main meat recipes called for extensive cooking (well, smoking) times (10 hours+) and a lot of the recipes upon first look seem pretty simple but link to numerous other recipes as fundamental components of the dish (a rub, a relish, a brine). This is for hardcore BBQ'ers with a keen interest in home smoking and plenty of time, if not an entire weekend, to plan. This just doesn't fit my lifestyle right now. I need quick, I need easy and something I can do with a toddler hanging off my leg the whole time and this just ain't it. However I'm sure if you do have the resources, you will be richly rewarded with one heck of a feast.
In any case, I'd like to get a truck of these books and distribute one to each and every person (well, the ones that look young, time rich and carefree) on Brighton beach in the summer that are sitting next to their disposable BBQ with its totem pole of black smoke and charred supermarket burgers. People of Great Britain the BBQ is here.