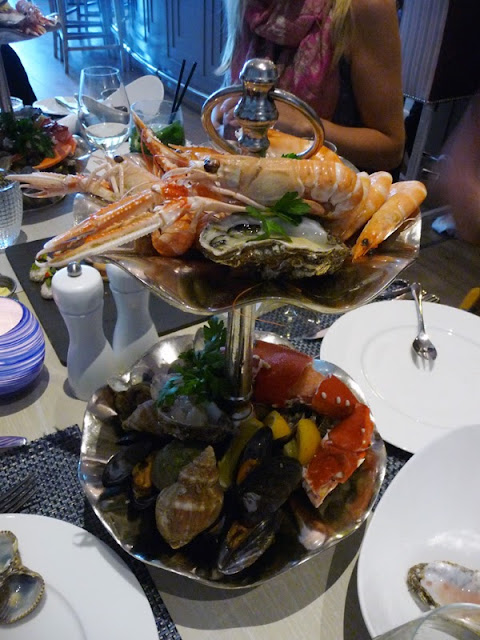 Brighton really lacks decadent restaurant venues. We're just all too laid back for that sort of shiz but every now and then extravagance calls and I crave the glamour of tall, detailed ceilings, crisp linen, shiny marble surfaces and most of all, waiters without beards, tattoos and mid-thigh shorts.

This year's opening of fish restaurant GB1 at The Grand hotel intrigued me from the start. Historically, hardly any of our main hotels have offered particularly good dining options. (Drake's is still one I think and Blanch House in its heyday was too.) And I think they've been missing a trick not capturing the locals but unless the restaurant in these large hotels are branded and run independently, you can just end up with depressing wedding catering food at best.

I've always had a soft spot for The Grand. The swing of the polished brass revolving doors, the smart foyer staff to greet you with a firm but friendly smile. She's the grand old Dame of Brighton for sure. Launched in February, GB1's interior in the former dining space has had a massive face lift. Dominant in the centre of the room is a horseshoe shaped bar to slurp down oysters and champagne and peek at the chefs preparing food for a bit of theatre. The burnt umber marble columns have remained and contrast with the cool grey walls and clean white chunky paintwork. The theme is "elegant seaside"  and done rather well too.
Unlike the interior, the branding for the restaurant is so off-subject I could write a book about it. The synopsis is that I think it would be more suited to a Gourmet Burger Kitchen or Giraffe seasonal menu. You want to charge me top dollar for food? I want to see well designed, elegant menus, properly finished and printed. The clumsy type and the tacky Union flag graphics, digitally printed on budget card really jar with the elegance and effort that has gone into the interior. The concept is ok, but executed badly. Ok, ok, most people wouldn't have such a strong reaction but it IS noticed, even if subconsciously. Dining is a sensory and visual experience from beginning to end and the menu is one of the first things touched. Let's leave it at that for now.

Sitting down at my place, set with more tools than a surgeons table, me and my girlfriends had two heaving lobster fruit de mer platters to get through. At £60 per couple, the price is in line with the other seafood restaurant in Brighton and the variety was excellent. I can't comment too much further as I actually don't enjoy shellfish other than scallops and the odd bit of lobster so this was wasted on me. What I did have tasted fresh and sweet so if you are a fan like Mr Graphic Foodie who can down oysters and wiggly things in shells by the bucket load, then I'm sure you will not be disappointed.

There's some interesting stuff on the menu and choosing was tricky. You will find a lot of reference to local produce and provenance which seems to be key to the ethos here. Tikka Monkfish, Lobster Burger with Smoked Bacon in a Brioche Bun or the Fillet of Cod with Parsnip Gnocchi and Merguez Sausage all sounded good. They also have a selection of steak and decent vegetarian options as well.

Having been warned off about the portion sizing and already looking at the two empty bottles of Chablis with, alarmingly, the third on the way, I decided to choose something relatively heavyweight to buffer the booze. Adoring skate wing and it being the catch of the day, which mentally for a fish restaurant I always think is the way to go, it seemed the best choice and well priced at £13. 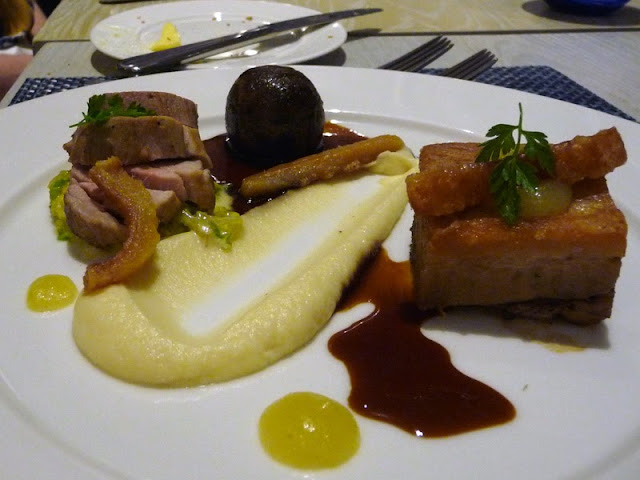 I needn't have worried too much about the portions because actually most of the main dishes ordered were pretty decent. The whole seabass with Piri Piri sauce looked divine and the locally sourced meat dishes, surprising for a fish restaurant, were gracefully considered, particularly the Pork three-ways. 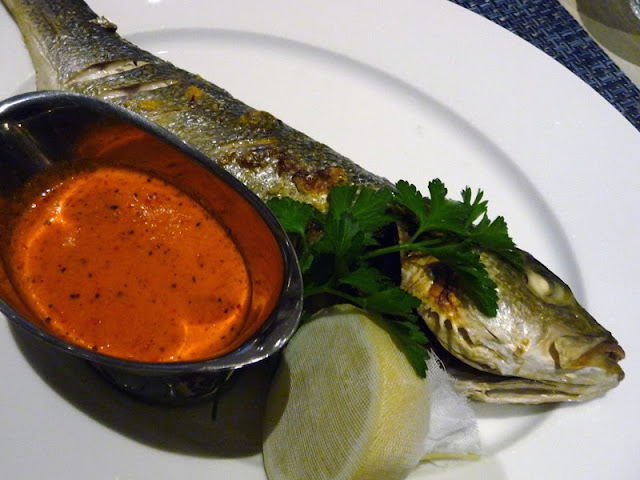 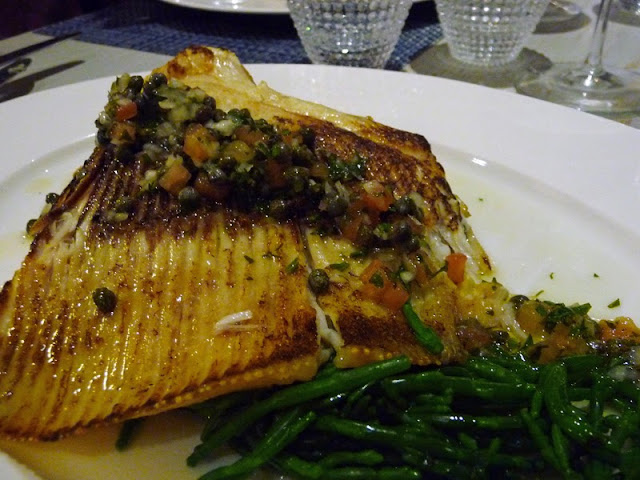 My skate wing with samphire was beautifully cooked; soft and fleshy with a delicious caper salsa vierge to add a bit of spike to the dish. You need to add a side order to the fish dishes but these are reasonable at £3. 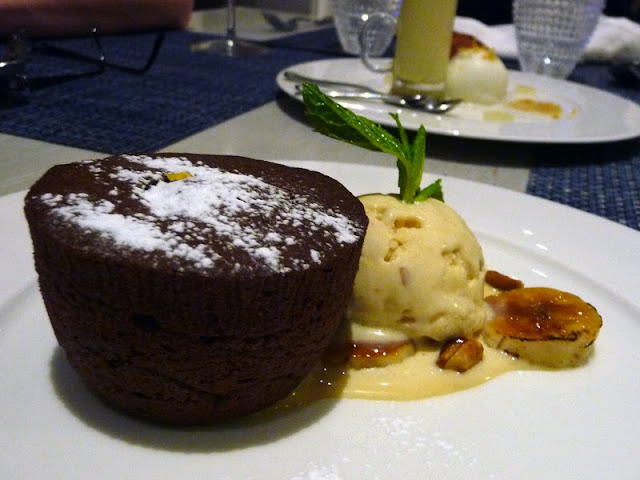 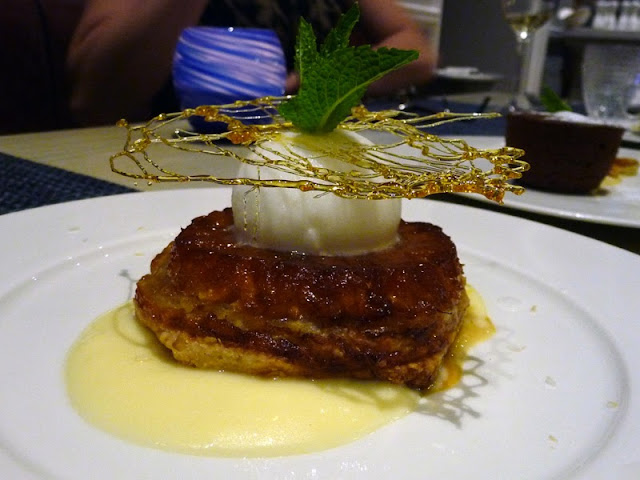 Stand out were the desserts. We concocted a sharing platter from the Pineapple Tatin with Coconut Sherbet, a perfect Valrhona Chocolate Fondant with Banana and Peanut Butter Ice Cream (I know!) and a Trio of Lemon which was a posset, cake and sherbet again. Happy days. All were devoured with smiles.

You could rack up one hell of a bill here if you are on a crustacea, caviar and booze bender and some fish dishes are on the pricey side (as with all fish restaurants). But on paper, most of the mains are acceptably priced from £9-18 without sauces and sides. Wine mark-up is a bit frisky and it was the three bottles of Chablis Francoise Chauvenet that piled on £100 for us lushes.

Overall I was reasonably happy with the meal but for some reason there felt like there was something missing. The anxious service could have been a little calmer and slicker, there were a few little issues here and there, again service rather than food. These were not too noticeable as we were dining as a group and happy chatting, but may have been more apparent as a couple. I'm still struggling to put my finger on that missing element and I'm not saying I wouldn't rule out a return visit, it's just I would probably opt for a meal at Little Fish Market for more memorable food and what it lacks in opulence in its surroundings, makes up for in the sophistication of the dishes served.

GB1 so almost hits the spot and I think with a little more refinement and tweak here and there could be a fantastic destination restaurant for the hotel and seriously make some money from the locals as well as guests. The interior is unlike anywhere else in the city and when my craving for something special returns again, it would be hard to resist this place.