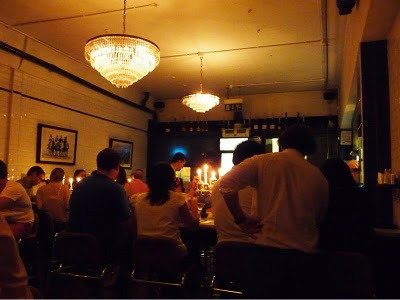 Fruit De Mer platters are available at a decent price as are a selection of oysters with a choice of hot or cold sauces (Sea urchin butter, Rockefeller, champagne, pickled cucumber and bacon, salsa, soy and wasabi...) which you can then wash down with a Black Velvet dah-ling.

And they do interesting things here as well as the norm. A changing selection of sashimi, Monkfish cheek Tempura, a whole wok fried crab. There are actually quite a few Asian inspired touches on the menu. What is also good is that you could blow £40 on a lobster a shellfish platter or settle for a plate of £12 clam linguini, so this restaurant can suit all wallets and tastes, unless you are a devout carnivore or vegan as there are, refreshingly, no allowances made for you.

As you would expect in a fresh fish restaurant, a few items were not available on the night so instead of my sardines I was craving, I had the scallops. Being up the duff, there was quite a lot on the menu I had to unfortunately avoid but really fancied scallops so asked if they would, or could be cooked though. I didn't, however, really appreciate the waitress' response of looking at me like I'd asked for a plate of Captain Birdseye Fish Fingers with a side of Tommy K. I thought it was an understandable request in the circumstances and she reassured the that of course (read: you blithering idiot) they would be cooked through. Anyway, more on her later. 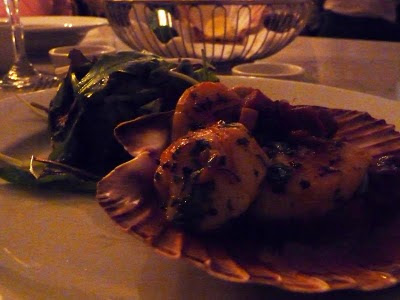 When they did turn up, they were cooked beautifully but, as I feared, were wibbly wobbly rare in the middle. Sigh. Maybe I should have said something but threw caution to the wind and they were absolutely delicious to be fair. Huge, sweet and swimming in crunchy chorizo pieces with the addictive oil released from cooking the sausage and a good level chilli heat. Luckily I'd saved a hunk of bread to soak up these precious juices being held in the shell. Hells yeah. 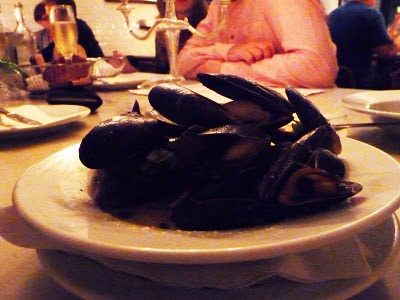 I was surprised Mr. GF didn't embark on the extravagant crustacean and oyster binge that I was expecting him to go on, but he does like his mussels and wasn't disappointed with his classic marinière. They were tender with a really good wine kick from the sauce. 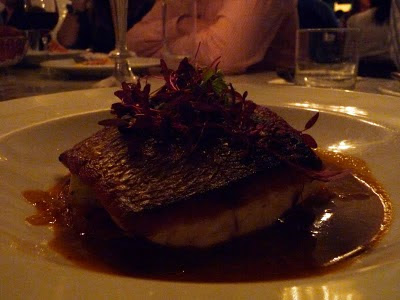 My main of filleted pan fried seabass was divine, with little cubes of courgette, onion compote in a rich sauce. There was a little spiced sweetness in the sauce like clove or cinnamon which wasn't entirely to my taste but worked well overall actually so that was me happy as pie. 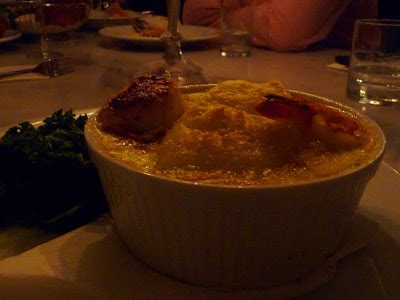 Talking of pie, Mr. GF went on to order the fish pie which was quite colossal and really good value for the large hunks of fish including the scallop and prawn that garnished the top.

Quality is the order of the day here. Everything was top notch and as fresh as it could be. Why Brighton doesn't have more (decent) fish restaurants I have no idea, but I guess if fish is what you want when you visit then you will not go wrong here.

Unfortunately service, as mentioned before, was a little off. Our drinks were forgotten, specials not mentioned (AND there was bloody Lobster Spaghetti and Lemon Sole on too - grrr). Our waitress had a very unusual personality, yet not unfriendly, and felt like she was rushing us out of our seats. Saying that the staff tending to other tables seemed fine, relaxed and friendly.

Another point to bring up is the communal seating policy. There is no booking and you are sat side by side if you are a couple on the bar tables and expected to share, which we personally didn't mind at all. The lady in the couple sat opposite us seemed quite self conscious and covered her entire face with her hands when she spoke, so I guess being seated next to strangers can make some people unconformable (I'm sure I didn't have something in my teeth or bad table manners that she was shielding from). There are tables of 8 and 4, and would make a very sophisticated evening with friends. But if you are after an intimate, romantic, lingering dinner, then communal seating may not be your ideal option. There is an alfresco chef's table/bar outside serviced by a kitchen hatch which you could prop up for a casual quick bite and a nose into the kitchen antics. Or, if this is all too much for your hermit-like sensibilities, they do sell shellfish and fish from a counter that you can cook in the privacy of your own home.

I really liked Riddle and Finns and when people ask me for a fish restaurant recommendation it would have to go top of the list (alongside their sister restaurant Due South which has some fab fish dishes yet isn't exclusively so like R&F). The menu is exciting yet caters for the classics too and a lot of the produce, as with Due South, is sourced locally which ticks my boxes.