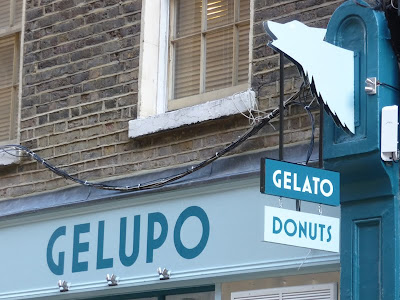 I have to admit, one thing that attracts me to Gelupo is the branding. Gets me hook, line and sinker every time. So I was practically in tears when they told me they were out of their heat embossed branded wafers!

No matter because I was consoled by some pretty good gelato. I liked the changing variety of flavours and that the gelato was not on show as you would commonly see for tourist-fodder, piled high and decorated with quarters of pineapple, plastic popes and lord knows what else.

The granitas were particularly good. The blood orange and the burnt almond really stood out, their grown-up flavours packing a punch. 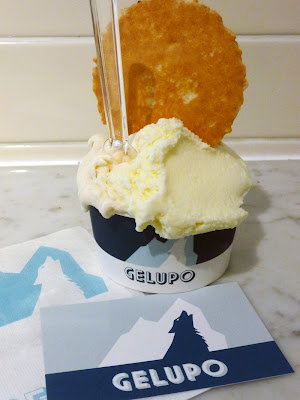 I decided to go for a two flavour in a cup (always a cup) and chose Fig Leaf and the Pear, Cinnamon and Ricotta gelato. Both were beautifully creamy yet very delicate, almost too delicate. I adore the dense, earthy flavour of sheep ricotta so would have liked more of this and I couldn't really detect the cinnamon. The fig leaf gelato was also quite, er, modest but had a fresh, clean taste.

Those looking for a richer tasting gelato should opt for the Chocolate and Grand Marnier or Fresh Mint Stracciatella. Sorbets are on offer as well as gelato filled cannoli, gelato cakes and sorbet filled fruit.

You can also pick up a few goodies, some sauces made at their restaurant Bocca di Lupo, a little fresh ricotta, cantucci, my favourite brand of balsamic vinegar (Saporoso), and a good stock of books, one obviously being Geometry of Pasta, written by BDL co-owner Jacob Kenedy.

Best thing is that Gelupo is open until 1am on Thursdays - Saturdays for those late night cravings.