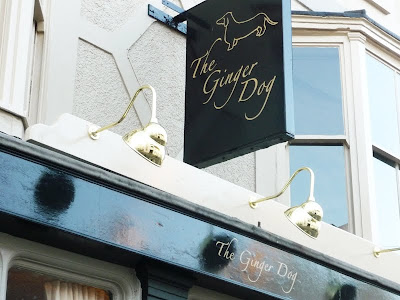 The Gingerman group of restaurants around Brighton are very well revered and with such a successful business blueprint, it should be difficult for them to fail in any new ventures. The newly opened Ginger Dog is the latest furry addition to their collection of gastropubs, joining the popular Ginger Pig and Ginger Fox, alongside the original Gingerman restaurant.

So I was really looking forward to visiting, and myself and Mr. Graphic Foodie were joined by fellow Gingergroup appreciator Essexeating and the lovely Elly Pearcafe. 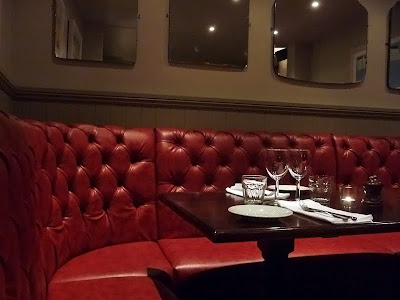 The small interior is nicely eclectic. I liked the seating booths (although it required a full on shimmy to get in, and I'm practically a borderline dwarf), the Jeeves & Wooster pendant hat lights over the bar were a nice touch and the Dogs and Bitches loo signs gave me a chuckle. I was surprised to see the finish a bit rough and ready in the loos, which had the old dodgy tiles sloppily painted over and the existing chipped melamine left untouched. The finishing standards were way off from their other establishments and I'm sure I'm not the only person that will notice this. But most importantly, I was hoping these cut corners would not be evident in the food itself. 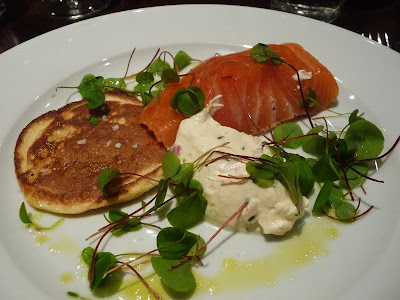 The menu is a nice length with an accompanying specials board. I went for the Sussex Coast Smoked Salmon with Blinis and Gin Créme Fraiche. I winced as the salmon arrived in a great big slab, making the plate more suited to a lunch than a starter. It was good, but not the greatest texture when you are mauling huge hunks of cured fish. I couldn't detect the gin in the créme fraiche and I really needed the another blini (as suggested in the menu description) or twelve to finish the salmon. 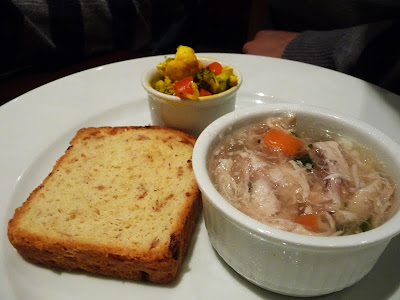 The boys' Potted Rabbit looked pretty but this was not set at all, the meat swishing around the unset jelly in the fridge-cold ramekin. The Hot Mustard Piccalilli, however, was great. But what's not to like about like pickles? 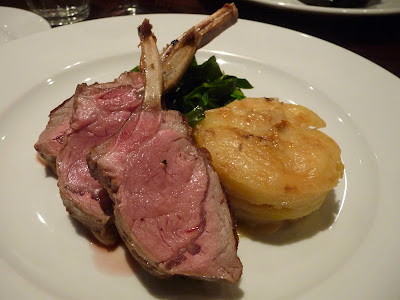 For mains I chose the comfortably conventional lamb rack. I particularly liked the garlic purée and the anchovy dauphinoise which accompanied the dish. Saying that, I did think the meat could have had a lot more flavour, towards the end of the dish I realised I was just going through the motions with it, and with the quality of the meat in mind (from Redlands Farm in West Sussex), it should have been made the star of the show. 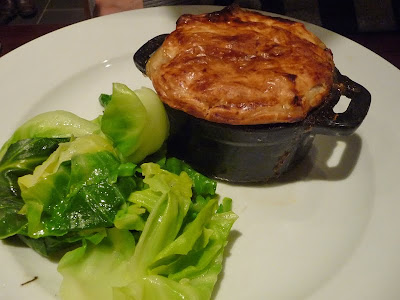 Mr. GF's Ham Hock, Trotter and Potato Pie sure looked and sounded the part. But again it was only ok, the first couple of mouthfuls being quite gristly were a little off-putting. With the listed ingredients, it should have been a real man's pie, packed with moorish flavour, but instead it was a bit, well, wimpy. 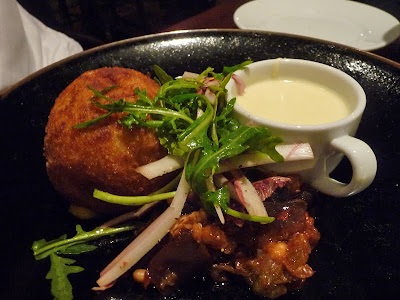 Essex Eating's main of Parmesan and Truffle Arancini was the most interesting, coming with a Goat Cheese Fondue and Caponata. I did think the arancini was a bit on gluey side, particularly when I had an excellent example at their Ginger Pig pub. The fondue was tasty and worked really well with the dish. Elly chose the best with the Grilled Rye Bay Plaice with teeny, tiny little brown shrimp. 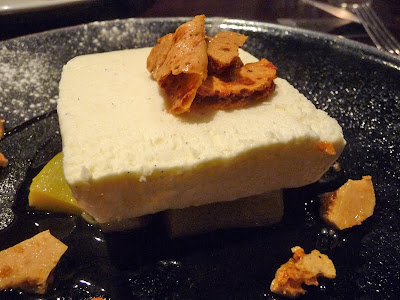 Feeling a bit deflated at this point, I had to have dessert just to pick me up. The Iced Vanilla Parfait with Poached Rhubarb and Honeycomb sounded like it would do the trick. This was a nice little pudding but any niceness was overshadowed by the unmistakably burnt honeycomb and slightly bland, undercooked rhubarb. I would have liked more vanilla in the parfait and less of an icy crunch. My heart sank a little deeper. The sample of treacle tart I had from Mr. GF's plate was rather delicious though. 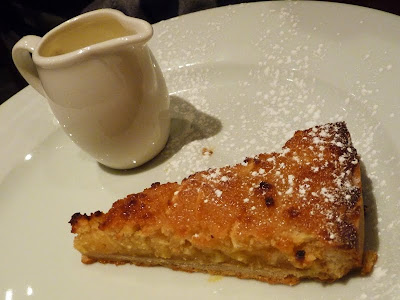 So there we have it. Was I expecting too much? Would I have been as disappointed or as critical had this not been part of the Gingerman empire? Possibly a little, but at the end of the day, mistakes are mistakes, and I would have noticed unset jelly, burnt honeycomb and general meh-ness anywhere.

Service was friendly enough but bumbled. We were asked the same questions throughout by different waitresses. There seemed to be no communication on the floor.

A real shame. As these are still early days for this gastropub, I hope my experience was just the evidence of extended teething troubles soon to be ironed out. However with the amassing mixed reviews beginning to filter through they need to pull their socks up sharpish, or this latest venture will really be going to the dogs. 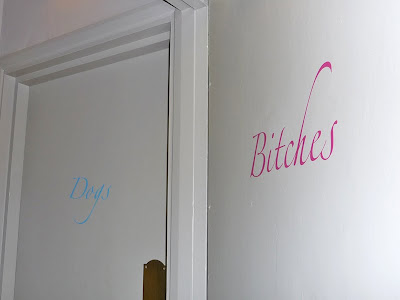