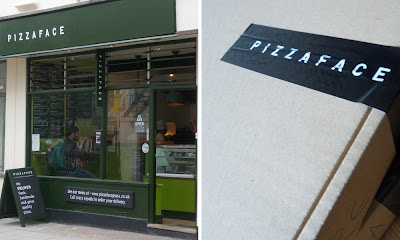 I walk past the relatively new Pizzaface most days, admiring it for looking so different to most other plastic-fronted take-aways in Brighton. It's particularly successful in the design stakes, which of course would appeal to me. Even more tempting however, is the menu. After a peek at their website months ago, I have been itching to try The Bore (pork and boar salami with sliced red onion and mushrooms, £8) and the Pecora (lamb prosciutto and sautéed mushrooms, also £8).

I'm always a bit anxious about ordering take-away on the phone, not because I'm worried that the food will be bad, it's just that I've ordered it probably 3 times in my whole life. The idea of calling someone up for food who then brings it to your front door, while you have a clear view of your own kitchen seems absolutely bonkers to me! But after a few late nights back from work I could see the appeal. 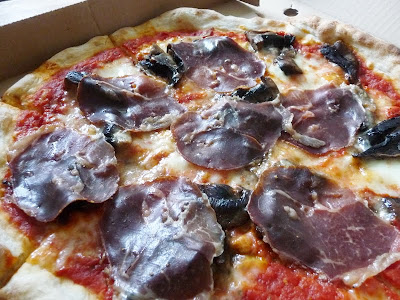 Well they certainly looked good on arrival. First up was the Pecora (above). I have never tried lamb prosciutto, or even heard of it for that matter. Prosciutto to me is pig at it's best - I adore it so was keen to try this unusual lamb version. This was far, far stronger in taste than pig, quite pungent, oddly grey in colour but delicious with it. I could understand why the other topping had been kept to a minimum to let the personality of this prosciutto shine through.

However, we must get back to base-ics. The base of the pizza is king, get that wrong and you may as well forget it. Pizzaface's bases are paper thin, more so than they seem in the pictures. They are probably the thinnest I have come across, and whilst I don't want to chomp down of a deep-dish, I do want to actually eat something. But the real problem was that there was no lightness to the base, instead being tough, chewy, flat as a pancake and close textured. Aside from the air not being there, taste was also lacking. The bases here really do need quite a bit of work really, with both the recipe and cooking techniques addressed.

Sauce-wise, the amount was good although a teensy bit too much basil which is a common problem. Not anywhere near as bad as the time I was subjected to a very unfortunate pizza in Strada (don't ask), where the amount of basil in the sauce was like licking the neck of a heavily cologned gigolo. Not a good memory but a very vivid one. 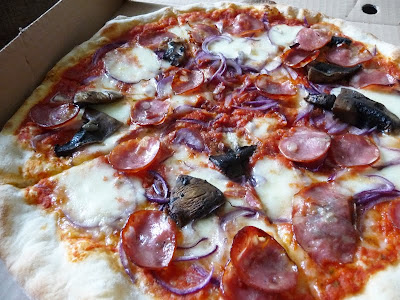 Anyway, back to Pizzaface and The Bore (above). Much like the Pecora, the topping quality was first class. The boar salami had that dense flavour synonymous with boar and with the sharpness of the red onion and having the chunky mushrooms packed with flavour through pre-sautéeing made for my kind of pizza topping. If I could scrape these toppings off, onto say a base from Adagio, I would be in sheer heaven.

The choice of toppings at Pizzaface have been extremely well considered in balance and originality, not pandering to any odd choices like fruit, or as I saw on one website this week, fish fingers. So I could happy eat 95% of them here. But the foundation of what makes a really great pizza is lacking, which is a real shame and a total missed opportunity for what could possibly be the best take-away pizza in Brighton.