My first ever experience at Pizza Express last week ensured that my size 3's will never cross one of their chain restaurant thresholds again. So it was really nice to be invited up to London try some real pizza at Adagio, or pizza al taglio to be more precise, meaning "by the cut". And it literally is by the cut using special pizza scissors. Here pizza is sold by the gram, a decent slice of pizza being around 150g depending on the topping weight. One of my first food memories was of an al taglio stall and being stuck at Rome train station with my parents aged 4. My dad bought me a slice of pizza with potato and rosemary. Delicious! The long train wait was momentarily forgotten.

I could probably count on one hand how many decent pizzas I've had in the UK but I try all the same! Adagio owner Hagit, although from Israel, will give any Italian mamma a run for their money, feeding everyone up as though it was their last meal, ordering taste samples after taste samples out in the street to entice passing trade. The passion is certainly there but was the pizza?

Pizza al taglio is fast food. To be picked up on passing and eaten on the hoof. So gourmet pizza it is not but it's not supposed to be. 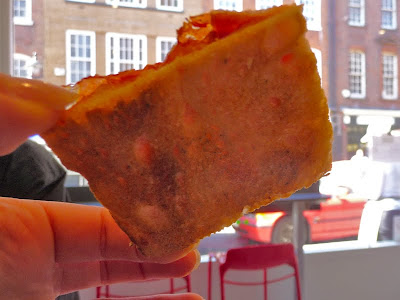 The base of a pizza is king and here they were light as a feather and wonderfully thin, crisp and chewy as any decent base should be.

The dough, made with a special mix of flour containing more protein, is left to rise for 72 hours (the name Adagio actually means "slow"). Apparently there is only a small amount of yeast but look at the bubbles! The dough was quite liquid and I guess would have to practically be poured out. Amazing.

And how refreshing to see just a sensible amount of topping, and cheese - I'm talking about you in particular. 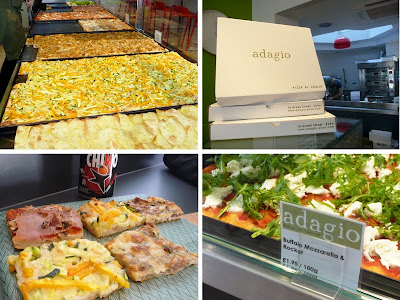 I must have tried everything on the menu; top on my list was the Spicy Salami and, no surprise, the Potato and Rosemary (with truffle oil) which took me back. There is a bit of a divide with the potato pizza but you must try it, it's one of my all-time favorites. The really colourful Courgette and Pepper topping was also really good as was the Sausage and Mushroom. 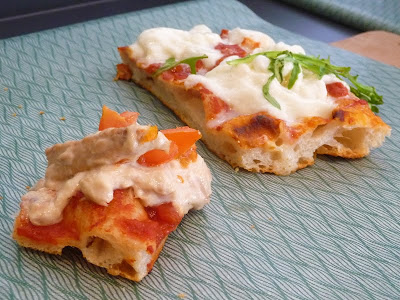 My least favourite was the one Hagit was most insistent on me trying. Tuna with Artichoke is a classic combination but the tuna had been mixed with mayonnaise and mayonnaise in any quantity does not belong on a pizza any more that pineapple or Peking duck does. It's apparently popular but maybe it's because it looks the most filling, I don't know but it wasn't for me.

All the time I was there, there seemed to be at least one Italian customer being served and if that isn't a recommendation, I don't know what is. One thing I would say is that the Italians were used to this concept and were comfortable but the other customers were sometimes a bit hesitant about how much they were getting for their money. A size guide poster would be all that was needed to show how big 100g or 150g is roughly (topping weights will alter the size a bit).

Other than that I think this is a cracking place for lunch which even sells San Pelligrino Chino drink, a sort of crodino tasting cola - yum!

After all that pizza eating I was given two heaving boxes of pizza to take home. Hagit wanted me to see that the pizza heats up really well at 250 for 3-4 minutes. And amazingly it really did taste as good as it did in the shop! I invited my Italian parents over to help eat it all later that evening and they gave it the thumbs up. Their favorite? Potato of course...