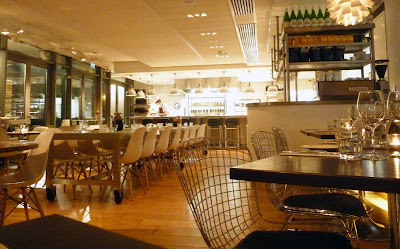 Table is a good looking restaurant. Situated on the former site of Zilli Café (which the Brightonians never really warmed to), it is now run by Company Of Cooks, who own the likes of the cafes and restaurants in the Southbank Centre, Regents Park and Tower Wharf.

It's a big restaurant too, which is why I suspect it is frequently empty when I walk past it. Bit of a kick in the teeth for them as on the same street the Pizza Express, Las Iguanas, Carluccio and Giraffe chain restaurants always seem to be bustling. Maybe the problem is that Table looks expensive which is a shame as if you study the menu–certainly the lunch or early dinner menus–prices are comparable with those ridiculous pizzas with holes cut out (sheesh!) in Pizza Express.

I was also keen to try this place as the reviews and word-of-mouth have been very favourable indeed. 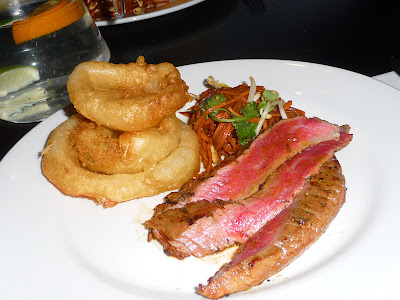 Taking an early dinner one weekday, the offer of 2 courses and a glass of wine for £12 seemed an absolute bargain to me. Choice was limited as you would expect, but what there was to choose from was enticing. Having spied the puddings, starters were bypassed and as I was in a meat mood, I opted for the Soy marinated Skirt Steak, Onion Rings, Bean Sprout and Coriander Salad. Skin-on chips were extra at £2.50.

The plate arrived and my eyes were satisfied. Initially very tasty. Three mouthfuls in and still good but then something odd happened. Once the plate had (quickly) cooled, the onion rings and salad became very greasy, the chips became limp. It wasn't a terrible meal but it was er, hard-going. It didn't help that the steak (and not being asked how I wanted it cooked) was borderline raw. The cooked and rare parts were beautifully tender but the raw centre took some chewing and a bellyful of raw meat just doesn't sit well with me. I can't say I felt great after.

The other problem was the flavours. The soy marinade and oriental inspired salad I got. But the classic onion rings with these seemed misplaced on this plate. Skins were left on the too-thin-to-be-called-chips chips which weren't very moorish and for once I didn't fight for the last ones in the bowl. 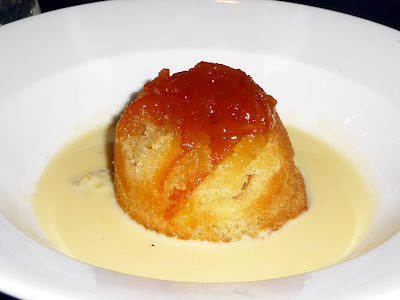 Puddings were pleasant. My Seville Orange Marmalade Pudding served with Custard was good, gooey and stodgy. Mr. Graphic Foodie's love of Sticky Toffee Pudding was satisfied although it wasn't the best example he'd had recently. 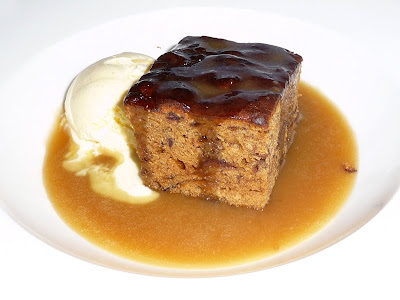 Despite a bit of a so-so supper I still want to go back to try the full evening menu, maybe on a Saturday when there is more life in the restaurant and pizazz in the kitchen.