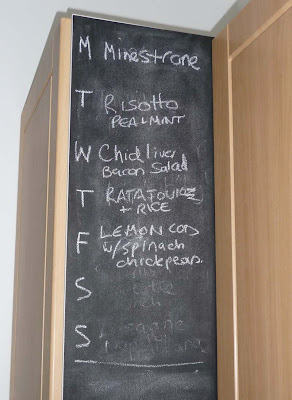 I'm a saddo. I am. I really like planning my meals for the week mainly as I live for my stomach and like to look forward to dinners, but also because this way I also save an incredible amount of time and money. Both of which I'm frequently short of. I also get a ridiculous amount of OCD pleasure chalking up the menu on my kitchen board.

I've never really thought about popping up a record of them on the blog but when friends come round, it is always noticed and commented on. Well, mainly nasty comments about my mental state but there we go.

Minestrone usually is the user-upper meal of choice and this time had a nice slab of leftover smoked pork loin thrown in. This is my base recipe, but to this one I threw in a handful of small tube pasta. The chicken liver salad is a new thing for me, but will be making a comeback as it was lush. The salad dressing was made by adding red wine vinegar to the frying pan used to cook the livers. On the occasions that I let Mr. Graphic Foodie in the kitchen I'm often rewarded greatly, this Thursday he made his legendary ratatouille. Friday's lemon cod served with wilted spinach, lemon and chickpea is a particular favourite, a life without chickpeas is not worth living in my book.

The weekend was spent eating at friends and family, hence the space!

So here we have it. A new Graphic Foodie blog series. I'll always do a week in arrears as changes happen. If there is anything particularly spectacular, I'll post a recipe. Right. Off to chalk up next week!
Tweet