in brighton, restaurant, review - 13 November 2009
I have a handful of really strong food memories, one of them being a particularly gorgeous, air-light soufflé served with a gooey marmalade middle that I devoured at The Gingerman restaurant many years ago. Since then, The Gingerman has developed into a group of restaurants and gastro pubs that are well know for their good food.

I had been meaning to try The Ginger Pig gastro pub for a long time now but had been put off with varying reviews and lengthy queues. Happily you can now reserve a third of the tables in advance, but despite calling two weeks before, they had all gone. Willing to take a punt, our group of four were faced with an hour and a half wait. We opted for the cheap seats down in the bar area to cut the waiting time which was a shame as the main dining area had been decked out beautifully. 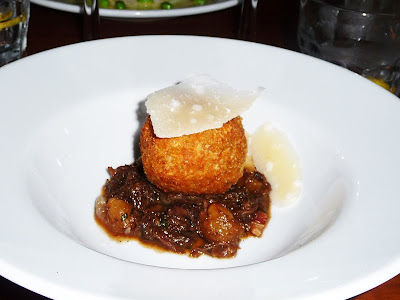 I've gone a bit arancini mad lately, making them three times in the past fortnight for entertaining. Never having eaten them at a restaurant, I took the opportunity with the Ginger Pig's wild mushroom arancini (or arancino as there was only one?) served with braised oxtail, smoked bacon and baby onion ragout. Far posher than my classic peasant take on this dish, the first bite was a (welcome) taste slap in the face. The rich stock and dense mushroom flavours contained in that little breaded ball were powerfully exquisite. The oxtail was a lovely texture and despite also being boldly flavoured, worked a treat with the arancini. I especially loved the little sharp baby onions. I was happy. 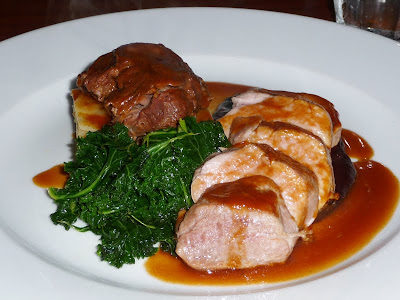 Next up was a roast fillet of pork, slow braised cheek with parsnip and potato gratin, black pudding puree and cider and mustard sauce. Again the meat (all supplied by Redlands Farm, West Sussex) was cooked to perfection. The pork was tender and juicy but if I knew how good the cheek was going to be, I would have ordered a bowl of those neat. So soft and sweet I had to be nudged by Mr. GF as I had closed my eyes and had a big grin on my face. (And we were dining with his mother who must think I'm a loon at the best of times.)

My eyes were snapped sharply open when I got a taste of the black pudding puree though. I adore black pudding but I did not like this puree. In fact I hated it, frantically scooping it to the edge of the plate as not to contaminate further this otherwise perfect meal. Who the hell knows what happened to this but it was a sickly sweet, cinnamon-liquorice tar. It didn't go with anything on the plate. Yerk. It was only after I'd finished that I also realised I hadn't tasted the cider and mustard sauce particularly. Maybe sauces are not their forte but it was a real shame. The gratin was comforting, creamy and with some bite left so all in all my thumbs were still pointing upward. 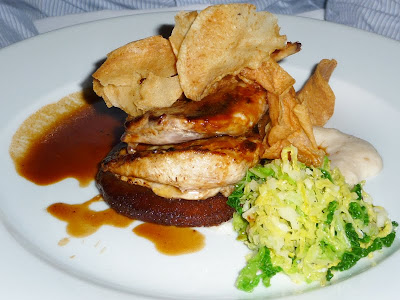 Everyone else on the table ordered the roast partridge which had a rather naughty looking duck fat crouton underneath. The clean plates and shining bones said everything I needed to hear. Portions were perfect and feeling a little full, I didn't need a pudding but puddings are wanted, never needed. 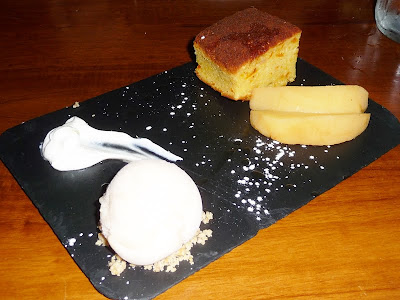 Mr. GF is the king of stodge puddings so anything heavy sounding is music to his ears. The apple and plum suet putting with vanilla ice cream AND custard was a delicious fruity hug in a bowl. My warm orange, quince and honey cake with Greek yogurt and quince sorbet was nice but I think the idea of it was better than the execution. The sponge was granny-cake heavy and the sorbet a little lacking in pout but overall it was a nice, pleasant pud. It just lacked some of the spark of the other dishes I had eaten.

The Ginger Pig is one hell of a gastropub and my meal left me as happy as a pig in s.... I am absolutely itching to go back and the few minor low-points were probably highlighted by the fact that they sat alongside some talented and memorable cooking.

The staff deserve a mention too. This place was full to the brim but they were so graceful and friendly throughout with eyes and ears everywhere. They run a very tight ship here, turning round tables but never seeming pushy.

Dinner came to around £30 a head without booze for 3 courses which is incredibly good value for the quality of produce.

So with Gingerman and now Ginger Pig under my belt, next on my list will be the Ginger Fox with it's cute thatched roof out in Albourne, West Sussex.