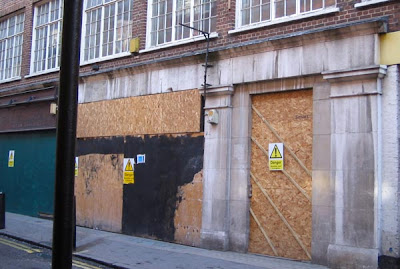 Probably the last place in London where you could get a cup of tea for 50p, egg and chips for a few quid and a priceless side order of nostalgia, atmosphere, welcome and originality. The picture above shows the sad remains of one of my most favorite cafés in the Whole Wide World. 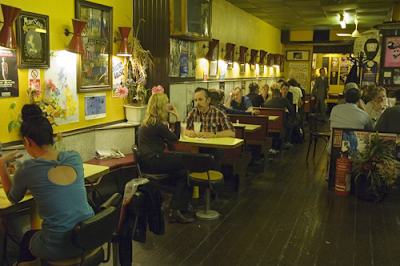 The New Piccadilly, not that there was anything new about it, was tucked away on a back street near London's Piccadilly Circus and was a mecca for classic Italian 1950s cafes, every surface covered in Formica, original fittings and cosy red booths - a different planet compared to the brash, super-lit identi-kit chain eateiries literally round the corner.

I can still hear the chug-chugging of the raspberry pink coffee machine, the satisfying ring of the old-school till and see the wall of postcards, the horseshoe shape menu and the crisp white overalls of the waiting staff. There was nothing I loved more than wasting hours with a strawberry milkshake or five, surrounded by the ghosts of gangsters, cool cats and hep chicks of a bygone era.

The proprietor Lorenzo Marioni, took over the running of this café from his family and had been there day in, day out for 50 years. The only thing that makes me feel better is the thought of Mr. Marioni resting his tired bones on a beautiful beach in south Italy, sipping on a cipriana. He was as much part of the New Piccadilly as the original fixtures and I'm glad that the last chapter of the New Piccadilly ended with Mr. Marioni closing the door for the final time, taking everything with him and destroying the rest.

Closed since September 2007, it is only now that I have found the heart to go back and pay my respects. Denman street is set to be redeveloped by Westminster Council and you can bet your bottom dollar that the depressing green and white glowing roundel of the dreaded St*rbucks will be the probable "replacement" for this gem. It was nice to see the scrawled messages of support and thanks that people had written on the chipboard panelling which boards up the site. I have no doubt that I'm not the only one who is going to miss it. A Flickr group has been set up with people's photographic memories.

Whilst these classic cafés are sadly dwindelling, there are some quality ones still very much alive and kicking. I would suggest a visit to the formidable E Pellicci in Bethnal Green Road E2. It's so stunning that English Heritage has even Grade II listed it (the first café to have received the award) for its Art Deco wooden panelling and floor logo. Unfortunately, 83 year old Nevio Pellicci who was the second generation of his family to have run the café, died in December 2008. But his wife still cooks the food in the kitchen and two of his children hold the fort at the front, ensuring the future of this East End jewel stays in the family.

Stare in awe at the pictures on classiccafes.co.uk or better still, work your way through the others while they are still on the menu.