in review - 29 January 2009
This was not a good experience today. To cut a long review short, I found glass in my salad and not just the one piece.

This place looks nice from the outside - they display their salads in the window and everything looks fresh and wholesome. The type of place I would like to eat from.

You can choose the number of salads you have and I was hungry so went for 4 salads to take away for £5.95. I chose lentils with beetroot, spinach with Parmesan, mixed roasted veg and sweet potatoes.

I think it was the spinach that came with the "glass garnish" so either this was a kitchen mishap which should have resulted in careful inspection or disposal of all food near it, not seeing the glass whilst carefully washing the leaves (or not as the case may be), or from a packet processed food ingredient which–as everything is supposedly made "fresh"–it should not have had. Make no mistake, this was a jagged piece of glass 4cm wide and looked like part of a jar or drinking glass base. It should have been spotted at some point during the food prep. I also crunched on a couple of small glass fragments so who knows how many I swallowed? 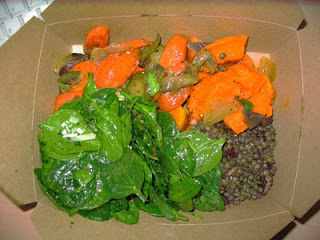 The salad itself looked colourful and appetising but the veg and potato were overcooked and everything was very oily and not in a good, nutty olive oil way but very slick and slimy. So I wouldn't have been going back from a food point of view anyway.

I hot footed it back and they tried to explain it away by saying they do not have plastic in their restaurant(!) and this that and the other. Well good for you Foodilic but this is a freaking piece of GLASS. Most worryingly, I didn't see them take the salad dishes where my lunch came from off display.

In my 'umble opinion any establishment that serves food should have safety and hygiene numero uno on their agenda. To not have this mentality shows a lack of respect for food and its customers and that takes the (out-of-date) biscuit.

UPDATE:
The super-speedy health officer from the council has been down there and fedback. Turns out that the hard plastic part from the blender used to make the pesto for the salads had broken and become mixed up in the salad. No wonder they defensively said they didn't have plastic in the kitchen when I confronted them with the "glass". So they must have known all along that the accident had happened and chose to sacrifice the safety of their customers than make a loss on the ingredients. Big tut guys.

This was supposed to be a blog about celebrating food so here's looking forward to my next good meal!
Tweet