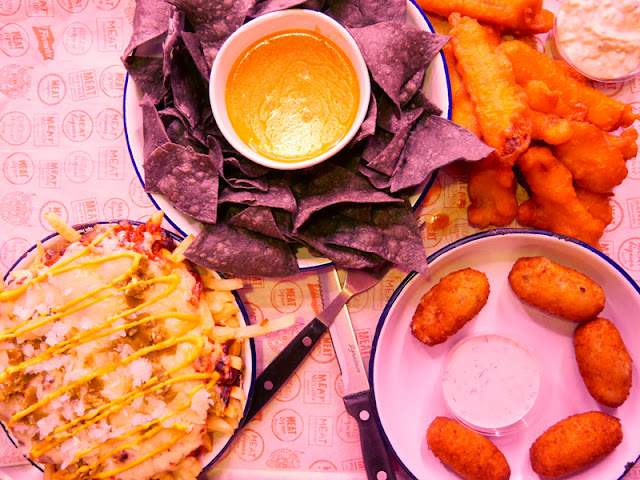 You'd think that vegetarians would burst into flames on passing the doors of MEATLiquor wouldn't you? Home of those messy, naughty burgers that everyone loves diving into, surrounded by graffiti, neon, chain mail booths and nightclub lighting. There's the name too. But here we are, behind the beast it's a pretty inclusive place. 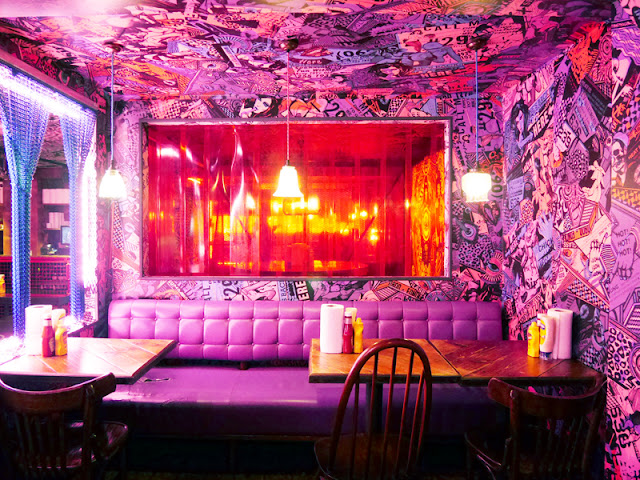 I still can't get over how much I like it here. Anyone that knows me would probably laugh at this - you wouldn't think it would be my thing, but then my collection of heavy metal normally raises a few eyebrows too!

Although I like the standard burgers, being the carnivore I am, today was all about the vegetarian specials and the "dry" cocktails. 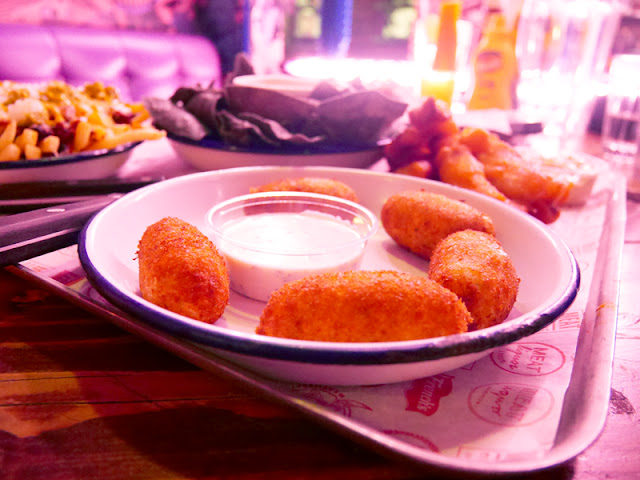 Starting with the "Poppaz", which were cheese and jalapeño croquettes, crumbed and deep fried. Eaten molten hot, there's not really too much to complain about. The ranch dressing served with them helped cool down the spice. 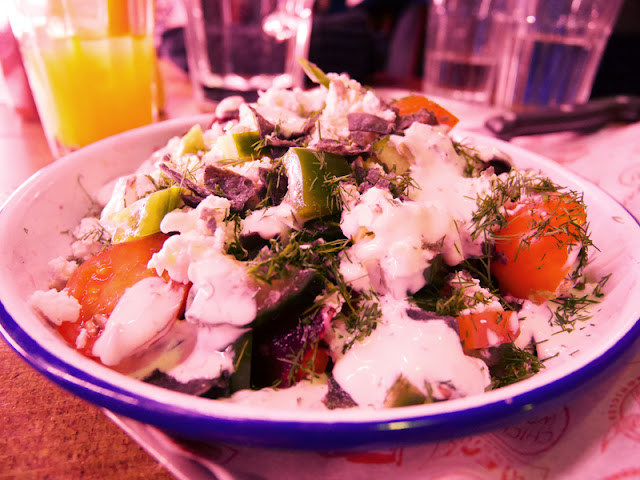 I can't imagine salad is the first thing on any one's mind here but after trying it, I would definitely order the Blue Corn Tortilla Salad again. Probably one of the genuine healthier options, this included a decent portion toward your five a day in the beetroot, corn, cucumber, tomato and lettuce. There was a sprinkling of feta and serious crunch from the crushed blue corn tortilla chips and sunflower seeds. It's a really generous size too - at £6.75 a bargain for lunch. 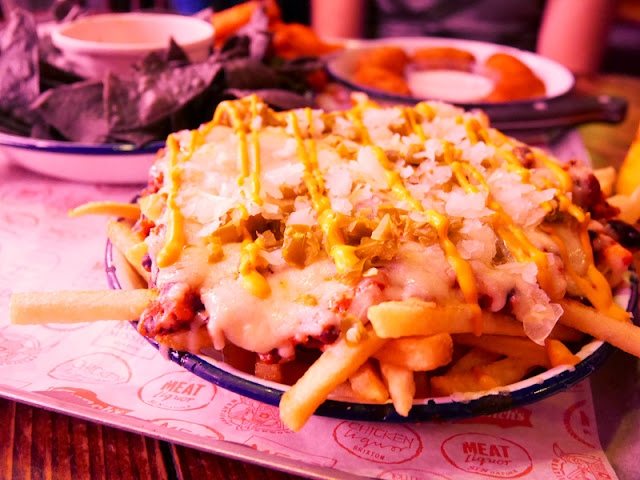 On the other end of the health scale were the Black Bean Chilli Fries. Beautifully thin fries topped with a well seasoned black bean chilli, jalapeño, finely diced white onion and mustard. (These are vegan without the cheese option by the way.)

Although I really like the chicken Monkey Fingers on the menu, the paneer version made a really nice alternative, the firm texture holding up well. Still slathered in that finger licking hot sauce and served with a blue cheese dip. 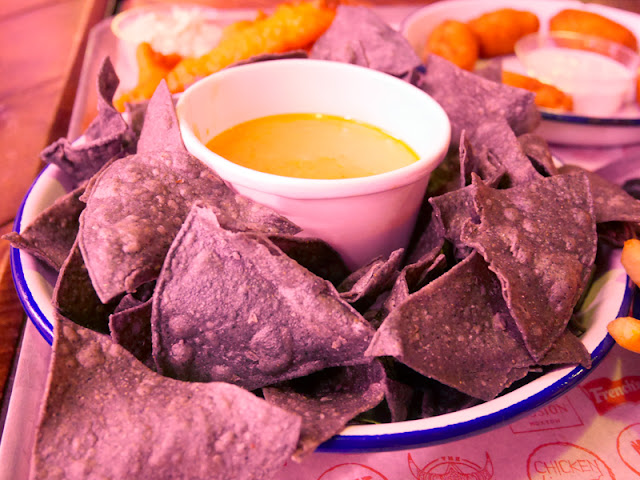 As there was so much food to get through, the cheddar and Hobo Beer dip for the tortillas had congealed a bit as it cooled. That savoury beery taste was there though and eaten hot this would not have been an issue. 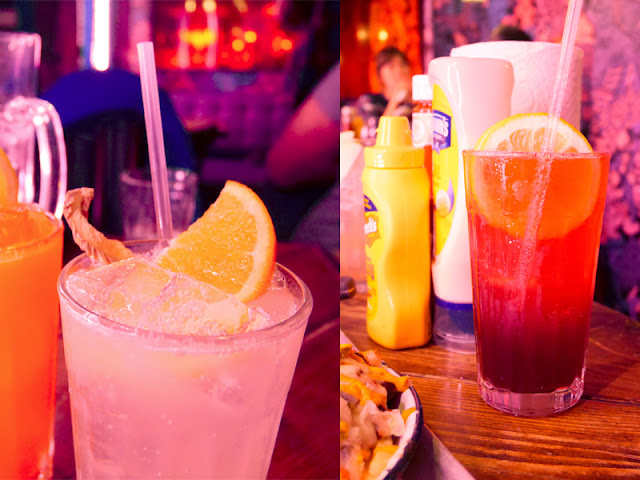 Drinks were lush and even without the recommended booze addition for each, were really interesting. I hate fizzy soda (cola is the DEVIL), so if I'm not drinking booze I tend to struggle with drinks. Hopefully they'll keep these on past January. Root 69 with it's vibrant colour from the beetroot was fresh and zingy with soda and lemon juice and the Carrot Top with turmeric I could have been drinking in some clean eating cafe for twice the price. 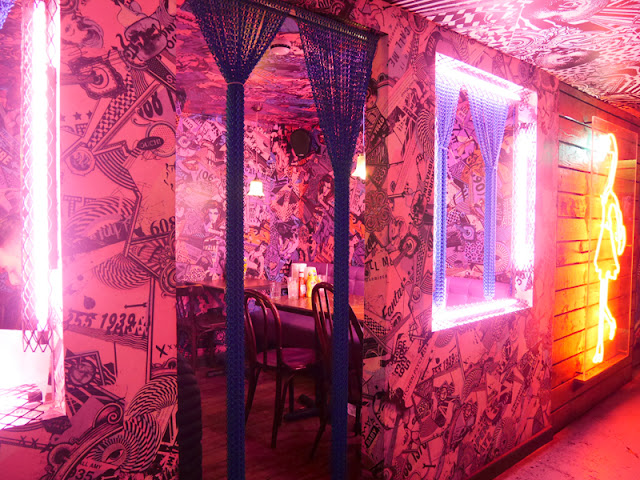 Although people should be well and truly off the January wagon by now (MEATliquor even did a ‘Falling Off the MEATwagon’ package deal to celebrate), don't rule this place out if you are going easy on meat or if you are vegetarian/vegan. There are of course still the vegetarian and vegan options on the burger menus as well as the Setan Fingers and sides you can bolt on to the specials. Whilst I would still opt for a Dead Hippie or buffalo wings on future visits (because, you know...MEAT) I would absolutely consider the meat free options again after trying them out. 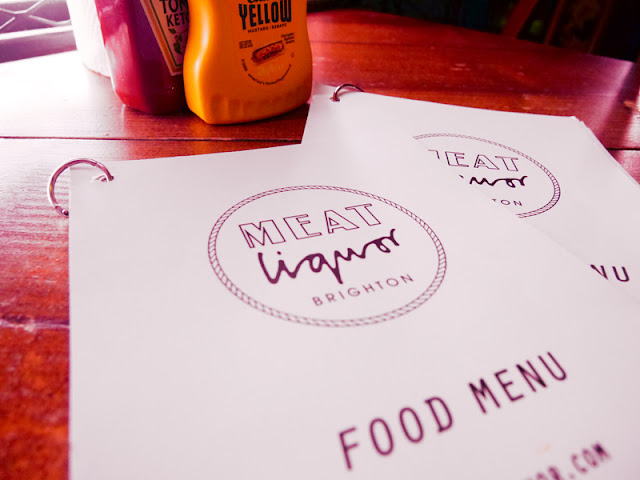 (Excuse the odd colour on the photography, the interior is bathed in a red light district ambiance.)

I dined as a guest of MeatLiquor. Words and thoughts, as always, my own.
Tweet