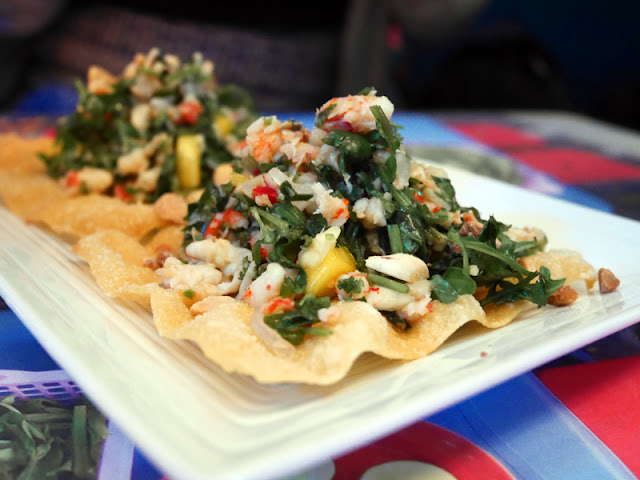 Holy Phok has certainly been one of the hottest new openings since they launched last December. The provoking name and cheeky copy writing probably adds a reasonable amount of spice to the interest, but still, we can always eat more Vietnamese food. 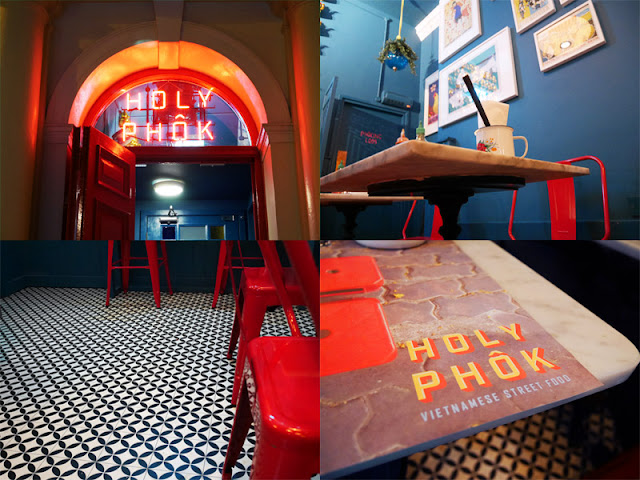 The space may be small but the interior is a style triumph. Pillar box reds, graphic monochrome flooring, THAT Hague Blue hue, neon signage and an entire wall of waving lucky cats create a quirky, fun and stylish setting. I love it. The branding has also been invested in which really adds to the visual experience (I would say that as a branding designer, but it's true). They also talk the talk with the ingredients and sourcing too. Attention to detail? Ten points and a gold star. 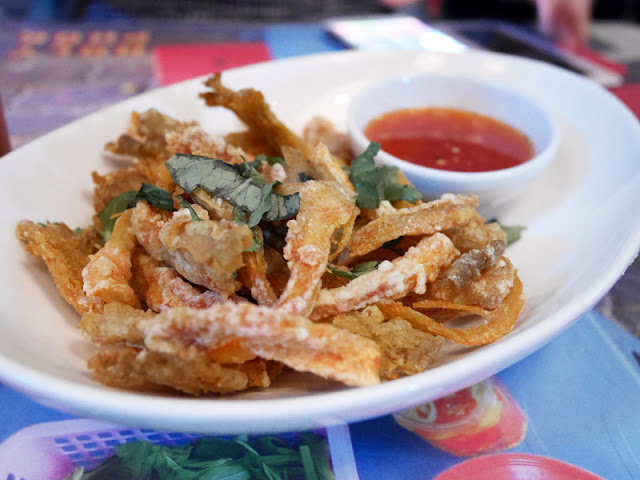 We started with the "Better Than Squid" dish which was slices of meaty oyster mushrooms marinated in turmeric and garlic, given a crisp coating then deep fried. I get where they were going with this  - the texture was quite like very tender squid strips but I couldn't help but think it would have been glorious with the real deal in there. Still, it was different and happily eaten, dipped in the chilli sauce.

The Wanties were pretty but a fiddle to eat; a thin, crisp waved wonton with a pile of delicious prawns, coriander, thai basil, mint, mango and shallots. One bite and the base shatters into smithereens, dumping the topping on the table, but no matter, I wasn't on a first date and I really enjoyed the light, fresh flavours that I expect from Vietnamese food. 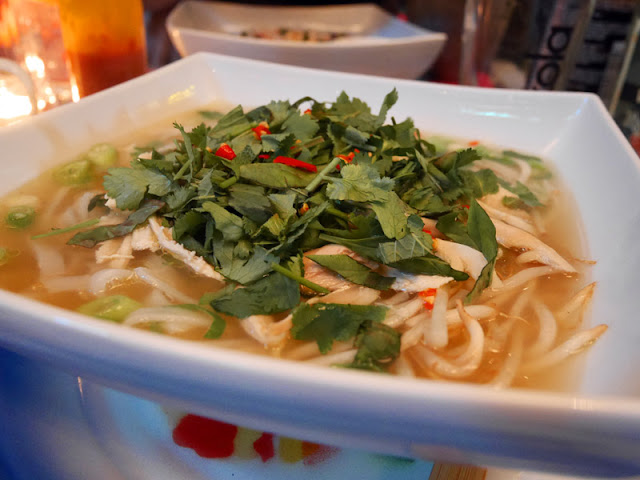 Now, you can't go to a place called Holy Phok and not have the pho can you? Plus I love the stuff, and what's not to like? Rich, deep stock filled with vibrant, fresh flavours. Bring on the cold snap because a bowl of this will fend it all off along with any ailment. Sadly though I have had much better, and dare I say it, even in our favourite Vietnamese chain restaurant too. The pho here—I opted for the chicken (£9.25)—lacked the depth and seasoning that pho lives or dies by. The chicken was tender and there was enough texture from the spring onions, fresh herbs and bean sprouts. Thin slices of chilli brought plenty of heat but this was a perfect level for me. Although pleasant and certainly filling, the "life-enhancing" billing was probably a little strong. I also like to interact with my pho, adding herbs, heat and lime to my taste rather than it to be already included in he dish. 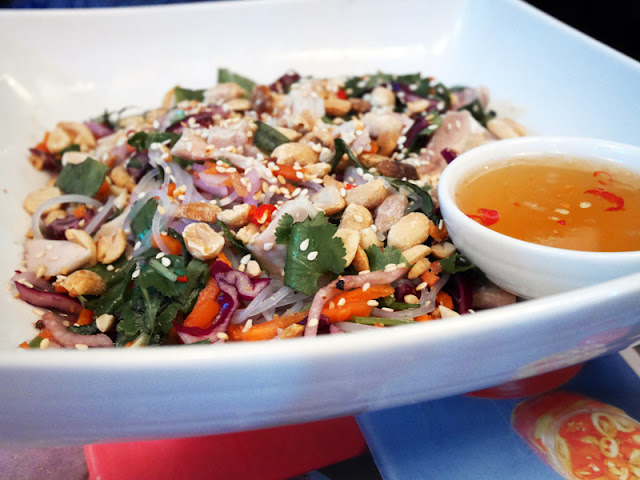 The ginger beer chicken salad also promised a lot but failed to deliver on expectations a little. Although the flavours were almost there, it was just very cold and very wet. I'm not sure I could detect the ginger beer marinade in the chicken but the nuoc cham dressing had the sweet/sour balance right with sugar, fish sauce and lime. Plenty of Vietnamese herbs, toasted peanuts and sesame added the crunch and the glass noodles made it a substantial main.

However, I noticed that everyone around us were ordering the bao buns which, to be fair, looked really enticing and we may have missed a seriously big trick. 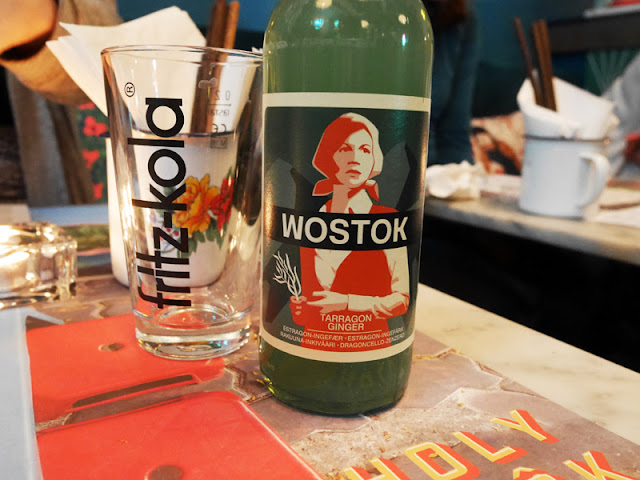 Soft drink aficionados, one of which I am not, will appreciate the unusual selection on offer. I drove (dumb ass) so chose the Tarragon Ginger Wostock, a drink based on Baikal from Russia. It was very green and very sweet I suppose. As I say, wine, water, coffee are my choice of hydration so all this is lost on me. The slurp of Funky Monkey cocktail I had was gorgeous though, with a cheeky little hit of chilli heat on the back of the raspberry fruitiness. There is a decent selection of wines and beers from Bedlam if you are sensibly on the booze. 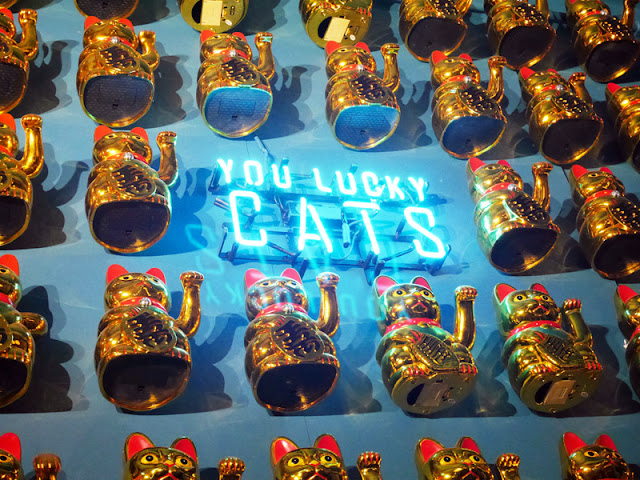 Portions are generous, service is friendly and the place is stylish and fun and certainly won't break the bank. They also do kid's meals and a short and sweet dessert menu - kids would love it here although they are only open 6-10pm Wednesday - Saturday for now, past most little one's bedtimes.

Although I had hoped the food would be better, it was still a good level and I would return, particularly for those buns. I'm sure in time they will go from good to great as the foundations seem pretty solid.