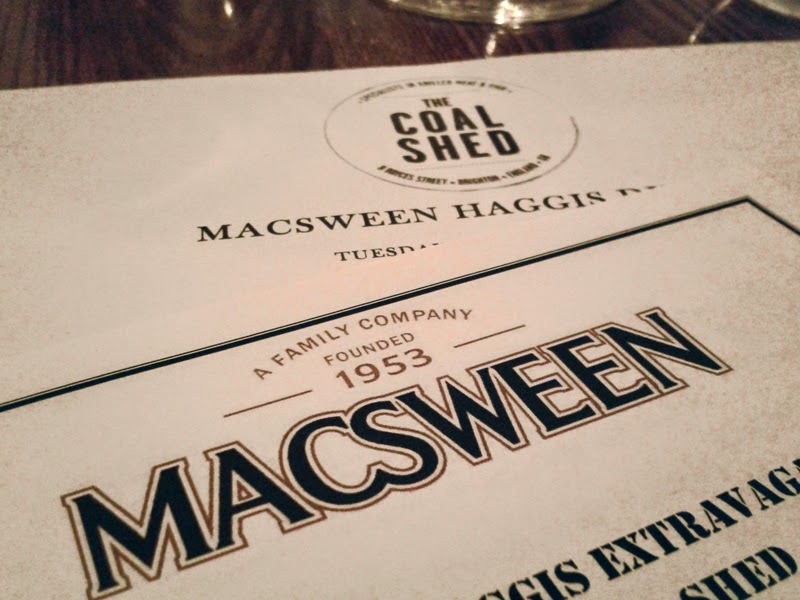 There are people who adore haggis and those that don't appreciate it so much. And I'd hedge a bet that 70% of those in Camp No can't bare the idea of it rather than relate their dislike to the taste. Which is daft as these people are probably happy to trough down plates of cured meats, rare steaks and sausages by the truckload. When you think about it, haggis really isn't too far removed from those foods. It's just Scottish charcuterie if you like. An interesting point raised at a very special dinner organised by MacSsween Haggis I attended recently.

Luckily, I'm firmly in Camp Yes for haggis as there were six courses of the gorgeous stuff to get through, crafted by the wonderful Coal Shed. Haggis was incorporated into dishes that complemented the variety flavour, some of which are new Macsween products like Wild Boar, Venison, Three Bird and we even sampled an unusual Chocolate and Chilli Black Pudding.

Each dish was washed down with not one, but two paired drinks (God bless the Scots). These were selected by Dave Broom who went for the expected whiskey, ale and wines, to the more unusual pairings of tequila and sherry. Some worked really well, others created conversation but that's what it's all about!

We polished off the meal with Haggis Spiced Chocolate Truffles and a dessert wine. Generally the meal was great, as you would expect from The Coal Shed. I think they treated the haggis a little lightly but liked how each haggis variety was themed appropriately and opened my eyes to different processes in serving haggis. (Excuse the bad photos, the food was immaculate but the lighting suitably moody.) 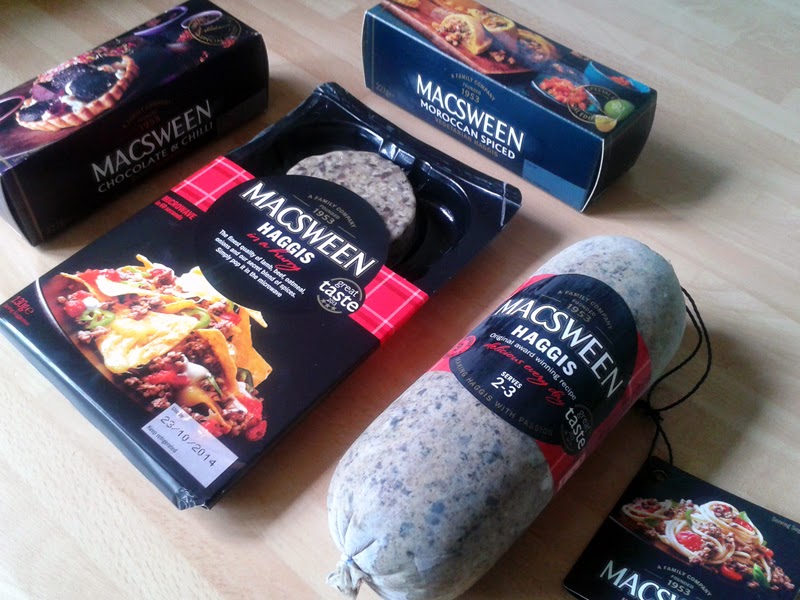 The Macsween story is also rather lovely, celebrating their 60th anniversary but still firmly a family business. The original Macsween Haggis was created in the family butcher shop in the 50s to the grandfather's own recipe. This is why Macsween Haggis doesn't contain the expected liver, it's just that Charlie Macsween didn't like the taste – fair enough. Today, the company are championing the introduction of haggis to a wider audience and are doing it extremely well. Even the format of the packaging has been remodelled from a traditional stomach shape (this is still available in farm shops and butchers) to a more consumer-friendly sausage shape. Purists may balk but it's a smart move. They also offer haggis in quick cook packs and smaller serving formats too.

I was sent away with a bag groaning with Macsween products and a challenge to create some dishes, something I'm really looking forward to. Expect a post up soon, I'm thinking of giving it an Italian twist obviously!