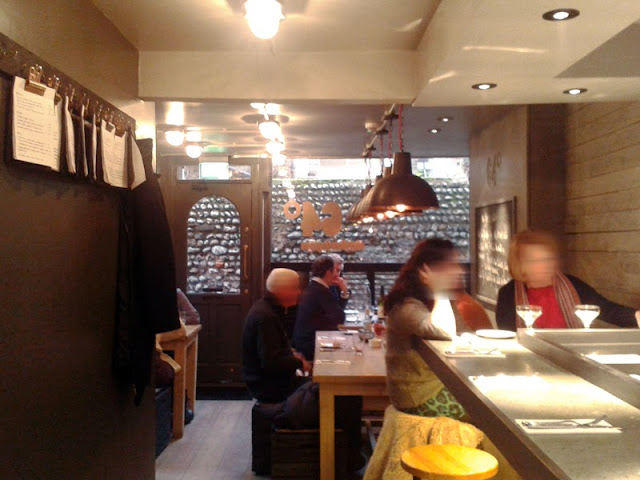 Brighton has had a good run of new restaurant openings lately and 64 Degrees is a bit of a cherry on the top, one for the real food nerds to sink their teeth into. From the teeny little space, you can sit centre stage on the pass and gawp at the intricate plates of food being created in front of you. I was so excited that I went for both lunch and dinner in the same week, so this is a little mash-up review of both visits.

One of the nicest things about the place, despite the line-up of concentrating chefs, seriousness of the food, array of cooking gadgets and the cool industrial-chic interior, is that it is unpretentious and accessible to all. Looking around, there was a varied demographic of diner, not all of them hoorays or SLR wielding food bloggers, thank the Lord. Chefs are happy to chat and explain the dishes if you are interested or you can take to one of the smaller tables and tuck in.

Essentially the format follows the fashion for small plate dining, there are four meat, four fish and four vegetable dishes to choose from. Dishes arrive as and when they are prepared, but I love "graze dining" as you can truly savour the food. 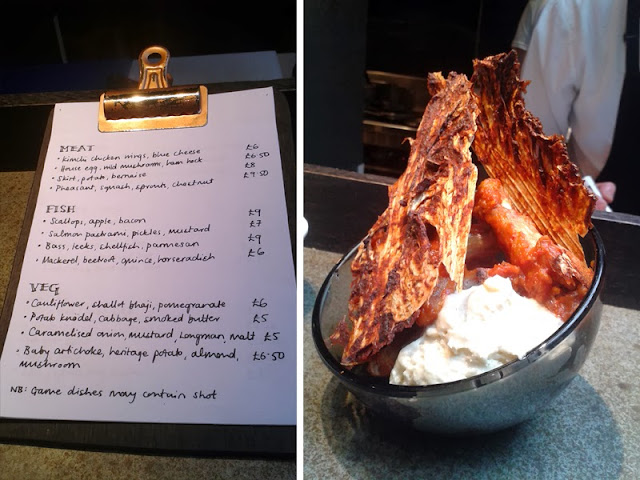 On my lunch date with Mr. GF, we sat at the pass and started with the Kimchi chicken wings. I do love spice in my food, my tolerance for chilli is relatively high so I was not disappointed with this spiky dish. The light, foamy blue cheese sauce helped take down the heat a notch and the soft wings were finger-lickingly good. But the dehydrated shards of spicy cabbage were insanely addictive. Sticking these in a packet for sale would be the easiest marketing job on the planet. Keep your hand-cut crisps and gourmet popcorn, this needs to be my beer snack. 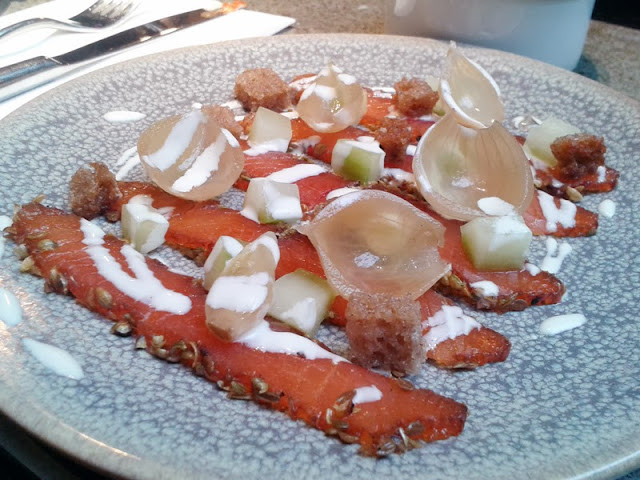 Next up was the Salmon Pastrami. This is cured for 5-10 days in a dry rub of fennel and coriander seed and pepper. Salt and sugar in equal measure give it that moreish sweet sour tang. I hate flabby raw fish so the translucent, toothsome texture was right up my street, quite intense in flavour but lifted with tiny cubes of cucumber and bread. 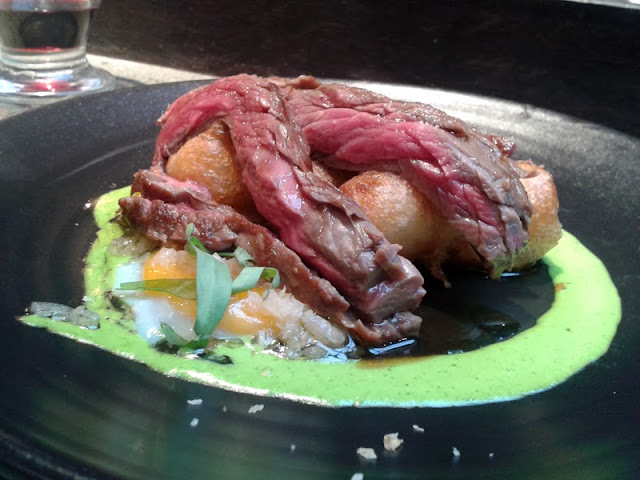 I think by the time the beef skirt dish arrived out tastebuds had been worked up into a frenzy so as pleasant as it was, didn't excite as much. Personally I wrinkle my nose at the word "deconstructed" and if I'm honest the Béarnaise would have been better as a silky "constructed" sauce to dip the soft meat and crunchy potato croquettes into. Still, had this arrived first, we would have probably thought it was brilliant. (On my dinner visit, this had changed to a more warming brisket, pressed potato and red cabbage dish that was more in line with the flavour intensity of the other dishes.) 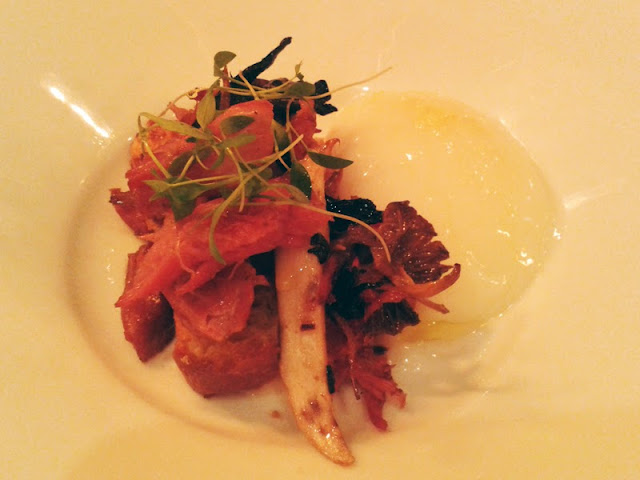 My favourite dish overall had to be the House Egg which I ordered at dinner with the girls. This is cooked sous vide for 40 minutes at 64 degrees Celsius (geddit, geddit?) so the egg is rich and silky. Add salty ham hock and wild mushrooms on a slice of toasted sourdough and you get a bowl of harmonious oooooh. You MUST order this. Whilst the girls were talking I hoofed this down all by myself and, quite rightly, got berated for selfishness.

I was most surprised by the vegetable dishes. They are as good, if not better than the meat and fish dishes (which is saying something). I wouldn't have chalked this place up as a vegetarian destination but I would recommend it highly now as somewhere special and happily tofu free. 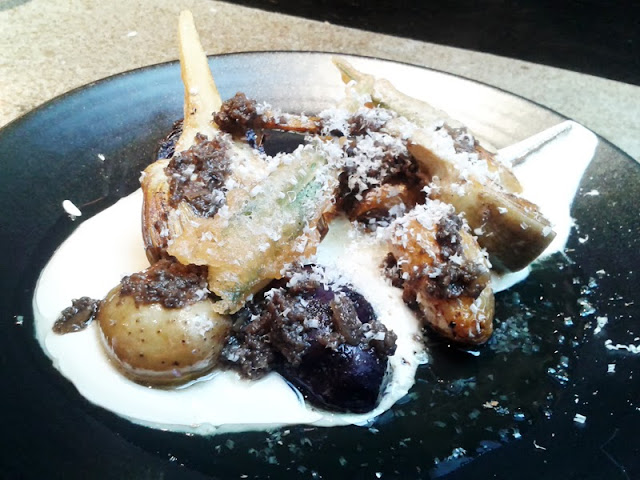 The highlight of these dishes would have to be the Baby Artichoke with purple and white heritage potatoes sat on an almond puree and the most divine Sauvignon Blanc vinaigrette with tiny fragments of shallot. Oddly, I found that the headline ingredients sometimes played second fiddle to one of the other components of of the dishes here. This was only because the other elements on this dish were so considered that the artichokes got a little upstaged but I adored it. 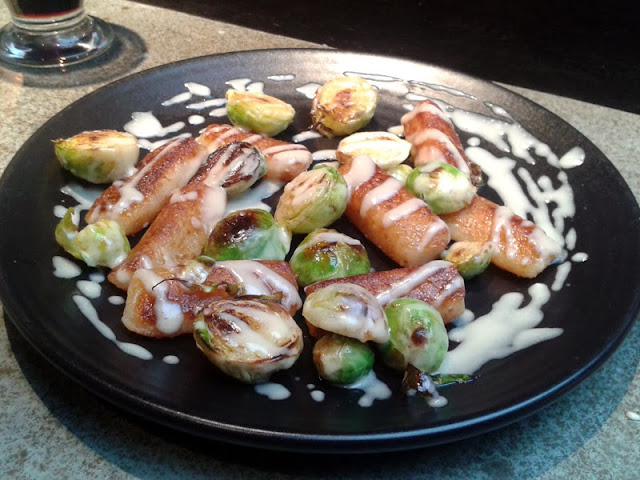 Also good was the Potato Knodel (German dumplings) with sprouts and smoked butter and the curry spiked cauliflower dish with crispy fragments of shallot baji with pomegranate seeds and rehydrated white raisins. As I said, the vegetables are certainly no accompaniment or secondary on the menu. I could happily just dine on all four of them. 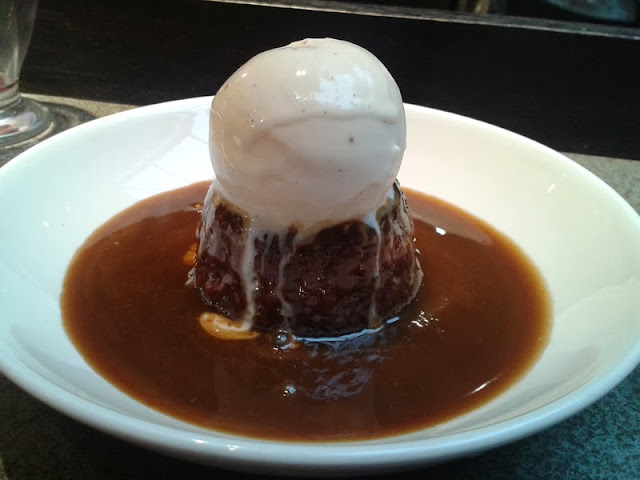 Desserts were not needed but too tempting. The sticky toffee pudding was quite classically presented compared to the other dishes but no worse off for it, it was a lovely dessert. Luckily there were no open flames nearby as the bourbon butterscotch sauce would have taken the place down but Mr. GF was in heaven as all his favourite food groups—toffee, pudding, bourbon—were present in this dish. 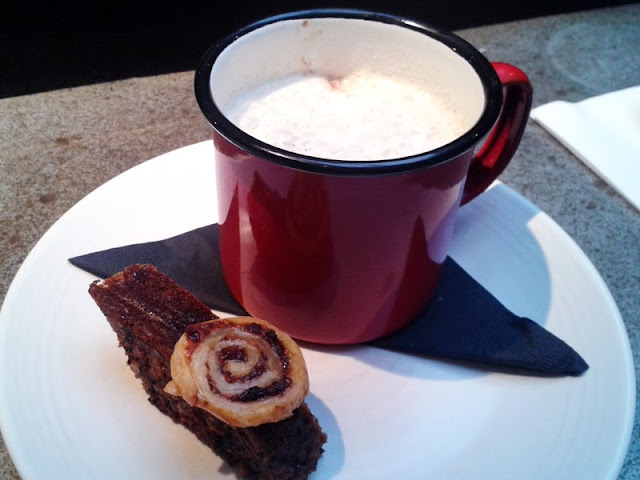 My hot chocolate was equally boozy, festively served with carrot cake and a minced pie, a nod to Rudolf and St Nick maybe. If you can't have fun with dessert when can you eh? My favourite part was the foamy texture of the hot chocolate and the surprise of the crunchy chocolate fragments at the bottom of the enamel mug.

This place is perfect for a romantic dinner for two or intimate group of four. The later dinner visit was with six girlfriends on a standard table. On the whole the food was loved but there were a few things that weren't liked, so made me think that this place isn't necessarily for everyone, and I think it helps to have a bit of the food geek in you. Also, as we were chatting away as girls do, we didn't concentrate as much on the food as my previous visit and this is food that deserves attention. I believe that large bookings will not be taken anymore anyway as we did take up a lot of the small space and they kindly honoured our table for the evening. Normally, due to the size of venue, there is a time limit on tables. 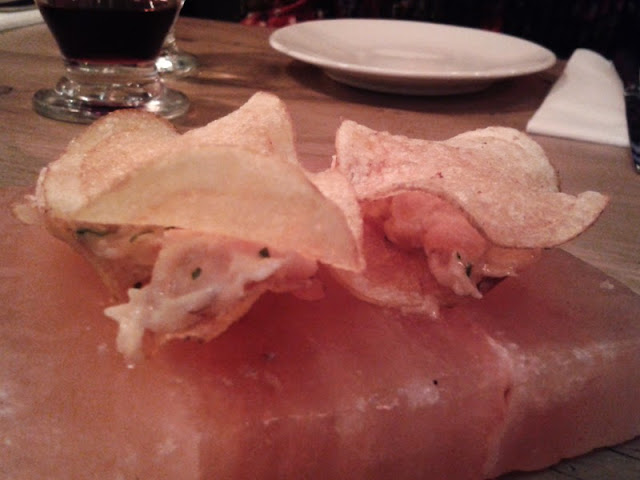 Funnily enough the only thing I ate here (and let's face it the whole menu practically by now) were the crisp sandwich amuse bouche that I think were supposed to be well, amusing. Being proper packet-style crisps with a chopped salmon filling, all I could think of was that they were something that Kerry Katona would be pushing for Iceland along with Lasagne bites and mini pizzas. Strange.

Prices are just about affordable. Small plates are always dangerous and sat at the pass we ordered twice as much as we had intended to, our eyes controlling our stomachs so you can end up with a hefty bill. If you are more controlled then it is still on the higher end of what you'd normally pay in the city but the quality is up there with the best, and dare say that you could spend far more on a far inferior meal elsewhere. Three plates per person is plenty and I think it represents good value. The streamline wine list has been well chosen and not too cheeky in mark up either.

64 Degrees is must visit for those serious about food and a place that has raised the bar for Brighton dining by several feet.