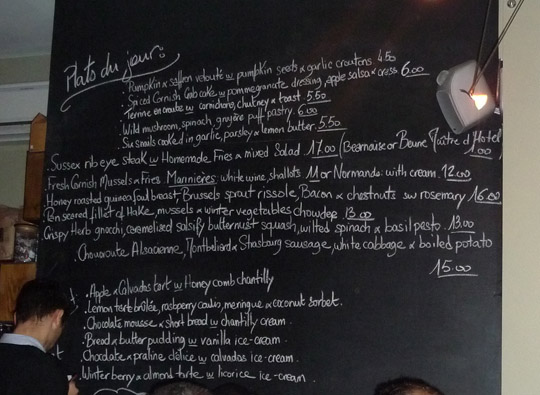 You may remember I posted a lunch review of Mange Tout a while back. Well since then they have gone on to open Plateau, which has been very well received. Mange Tout has also firmed up as a dinner destination as well, and, not having returned risking the European-paced service during my lunch hour again, I was more than happy to try MT again where time was not so much of an issue, as dinner I am happy to linger over.

There is something about MT that I really like, as per my first visit the interior is very appealing, striking the balance between cool and sophisticated perfectly. A very modern French bistro it is.

The chalked up plats du jour are select, yet varied enough to satisfy most tastes. Pumpkin & Saffron Velouté, Crab Cakes, Terrine en Croute or Snails to start. Steaks and Mussels for mains (bien sûr) plus other options like Hake, Guinea Foul or Crispy Gnocci (vegetarians, that token one's for you) were on offer. It all read deliciously, the meats were local and seafood Cornish.

The amuse for the night was a welcome little mushroom and truffle soup.

With the winter nip in the air, the Choucroute Alsacienne (French version of sauerkraut) with sausage and boiled potatoes seemed appealing and something a bit different, but I did crave steak. And as per my last visit, I think I chose badly again. 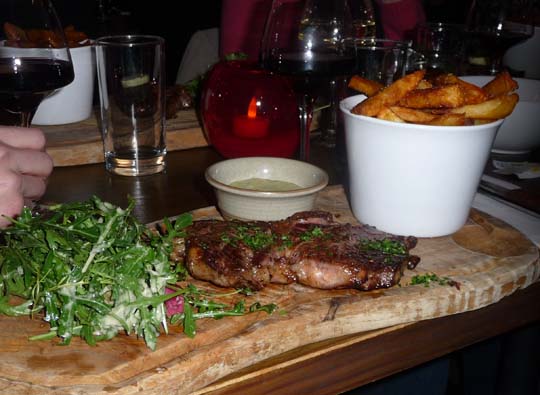 Now I've come round to having steak pink, even bloody, but I do not and will not ever like gnawing raw meat like a savage beast. Why would I do to a restaurant and pay for something I could eat straight out of the wrapper from the butchers? That's not cooking, it's a serving suggestion with a marked up price. Now this time, my medium steak was meduim on one half and rare on the other (quite some skill!). Had the meat been extreamly tender then it would have been palettable for me, but the rib-eye in question really took some chewing and I didn't even attempt the thick white ribbon of fat in the middle. The fries, well chips really, were heavily salted, but I like that, but most importantly crisp. The Bearnaise sauce was a decent example although a little cheeky charging an extra £1 for when the steak was £17 I thought. If I'm honest, I would have preferred to spend my money on the fillet steak at Cote down the road for the same price. 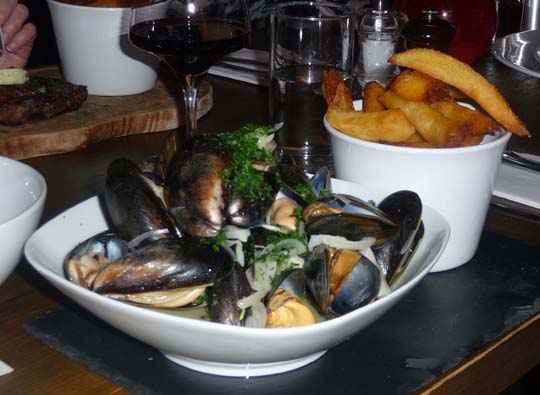 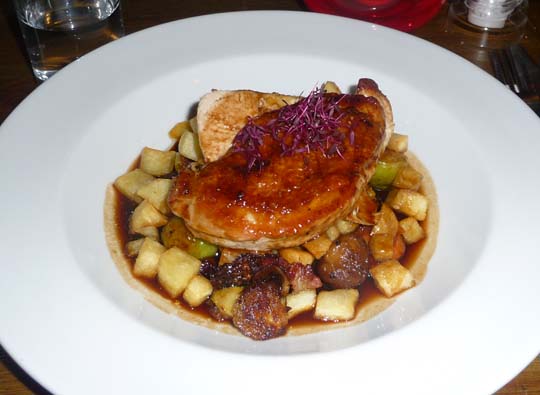 Round the table, the gnocci were gorgeously crisp althought the dish lacked a little dimension but the Ginea Foul got a thumbs up and the generous portion of Mussels smelt lovely. 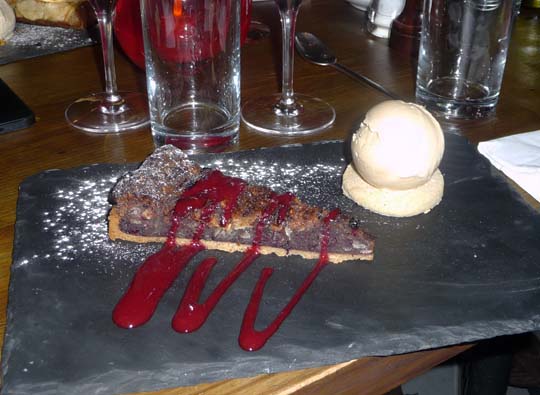 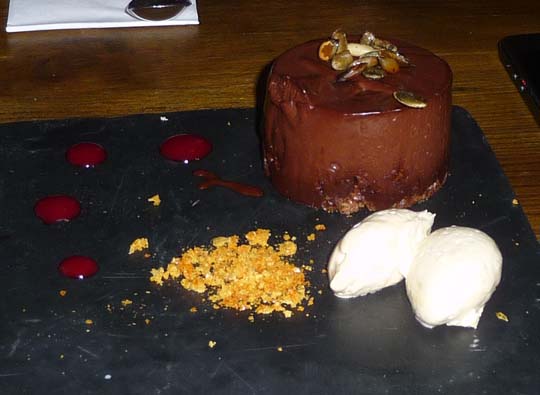 Desserts were nicely presented. My Winterberry and Almond Torte was rich but not overly sweet or sickly and perfectly matched with the licorice ice cream for a grown up dessert. The shortbreads that seemed to be on most people's desserts were a little bland.

Service was perfectly paced for dinner, very French and rather charming too.

I think going on reviews I have read, Plateau may be a better option for dining. However, I wouldn't rule out a return to Mange Tout though but will lay off the steak option next time. Nice, intimate restaurants are few and far between in Brighton so I would say give it a go if you are in the area.