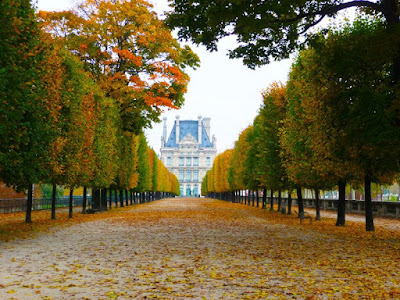 Paris for me is sheer escapism, frivolity and delight. Now it is possible to be transported to the heart of the city of fabulous in just over 2 hours. The chance to grab just a few hours of Parisian air had my usual humbug self squealing delight like a little girlie.

Travelling from Brighton to St. Pancras before I even boarded the Eurostar, I didn't want to leave in the dead of night, so I gave myself just 8 hours in Paris, getting in at a humane time and being sensible with my time there.

Food is the first thing on my mind when abroad and it seems that choosing a good place to eat in Paris is like the endless task of counting the stars, so I did my homework, absorbing information from the blogs and tips from Twitter foodie friends. The most recommended restaurants, cafés, bakeries, foodie shops and sites have be sifted through and put on a Google map of Paris gems.


View The Graphic Foodie in Paris in a larger map. Special thanks to @MathildeCuisine, @EssexEating, @Goodshoeday, @msgourmetchick, Ann Henry and Paris based food blogs Chocolate and Zucchini and David Lebovitz

Obviously you would need the ability to stop time to see all of these places in one day, but it has provided me with an excuse for a few multiple returns and proved really useful on the day. There are some great places in there and proves how brilliant social media can be. Maybe I can organise the rest of my life on Twitter? Anyway, if anyone has any other places too add, just leave a comment and I shall pop it on!

My obsession with the film Amélie led me first to the Sacre Coeur. With the film reenaction of the steep run up to the basilica and "ohh" at the view under my belt, I promptly ran back down into the arms of Rose Bakery for a little snackette. 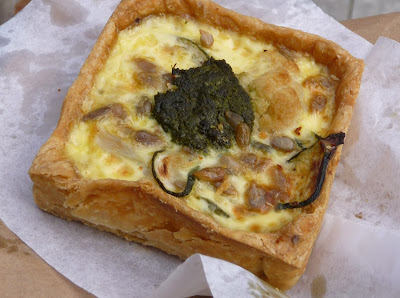 This was a popular venue (highly recommended by Clotilde Dusoulier) and not hard to see why on biting into my courgette and spinach quiche. The butter rich pastry was fine but robust and crisp. The punch of the spinach and mint in the middle was exquisite as were the crunchy little sunflower seeds. This was a good start. There was a queue for the bakery and I noticed that everywhere good had a queue. The French really don't seem to mind waiting so crowds are usually an indication of where the goodies lie.

The spectacularly coloured autumn leaves were falling, making the pretty walk through the Jardin des Tuileries all the more romantic and jolly good fun - anyone else still like kicking through the leaves? Ok, just me then. And a little river stroll is always on my agenda in Paris especially on such a perfect autumnal day. 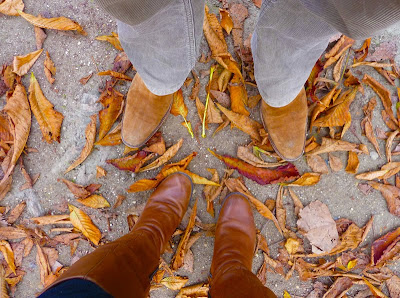 Lunch turned out to be slightly problematic in the end. As we had eaten breakfast on the Eurostar and weren't hungry straight on arrival, it was now past 2.30pm and most of the decent restaurants were closing after lunch service. A triangular trek between Le Relaise De L'Entrecote (a restaurant with only one meal, one way - steak frites), Le Procope (for my love of old establishments) and the very highly recommended L'Epi Duplin (which turned out to be closed full stop on Saturday for lunch) plus getting a bit lost, ate into my eating time. If you are serious about a long lunch I would strongly suggest getting into Paris earlier than I did, giving you enough time to build up an appetite for a 1pm lunch. Plus I forgot about the time difference which lost me an hour anyway, duh!

I did not want to miss out on a trip to Ladurée, visiting the salon on Rue Royale earlier just for a peek, but knowing I wanted to eat in the Ladurée Bonaparte due to the interior. The sumptuous room upstairs did not disappoint and was covered in rich navy baroque fabrics, scrolled, gilded furniture and the tables set with gold edged china in candy colours. 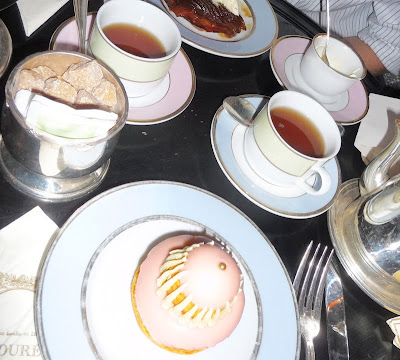 It was so dark in there and I felt a bit uncouth taking flash photography, so do see their website for a proper peek. I chose a cathedral shaped "Religieuse" pastry which was delicately flavoured with rose and had the most incredible choux pastry. The filling revealed rose confectioners custard and fresh raspberries. I love the fact that something so naughty could be called "religieuse"! The rich tarte tatin was also excellent and the mouthful I stole was a taste that will be remembered for a very, very long time. Despite being expensive (€6-€9 per pastry, savory mains €15-28 and a pot of tea around the €6.50 mark) I would have to go down as one of my top 3 places in Paris. A must!

High on sugar, I joined another lengthy queue for the infamous Pierre Hermé macarons. Once inside, chaos ensued so I grabbed a box of all of the flavours for ease, gulping at the €23 price tag. So is the hype to be believed? Well, I haven't yet troughed the lot (hard, it's hard) but most of the ones I've sampled have been divine. How they can be so air-light and melt on the tongue? Some of the more unusual flavours are a bit hit and miss but yes, do go and try.

Armed with my macaron treasures and a bag of other foodie goodies, I looked at my watch and it left enough time to pootle back up to Gard du Nord to catch the home bound train. I didn't catch the metro all day not because I'm incredibly hardcore (well, I am - all day in heels!) but because I saw so much more of the city than usual and would suggest doing the same to get the most absorption out of your day.

Normally I travel Economy on Eurostar, mainly because I'm a cheapskate, but was on this occasion treated to Leisure Select which is between Economy and Business. The main difference is that you are greeted by some very charming staff, have a stack of magazines and newspapers to rummage through, bigger seats and served either breakfast, lunch or dinner with wine and champagne.

Whilst on the subject of the food, and remembering that we are on the Eurostar not the Orient Express, the breakfast served in the morning was perfectly adequate. I chose a herb omelette, smoked salmon and sauteed potatoes which was served alongside bread, pastries, yogurt and juice. As we all know, the best thing about any "transport cuisine" is that it is a welcome distraction from your travel time.

Dinner was less successful and my chicken supreme and sweet potato mash had suffered the microwave zap a bit. Pierre Hermé would have used the Eurostar chocolate macaron as a doorstop and the whole, unforkable hazelnuts in the salad were a hilarious choice to serve on a moving train. However, the chocolate served with coffee was Dolfin and the champers and wine were not bad at all. It does seem that the on board branded products are carefully and well chosen.

As fatigue set in on the return journey, I was appreciative of the quieter carriage and the comfier seats. The extra cost depends on the time of your journey, varying from £13-£60 difference, one-way from London to Paris. I would say that the hot food is not worth the money but the rest of the service is. I definitely arrived more relaxed than in Economy and would opt for Leisure Select again especially if I'm savvy with the cost difference and timings.

I visited Paris this time courtesy of Eurostar who are promoting its Little Break, Big Difference campaign which start at £59 return. All of my expenditure whilst in Paris was out of my own little pockets. Humongous Parisian cheek kisses to Sarah at We are Social for organising my ticket, a little break was exactly what I needed and recommend it to everyone. There are quite a few other destinations I now have my eye (and stomach) on so watch this space.
Tweet