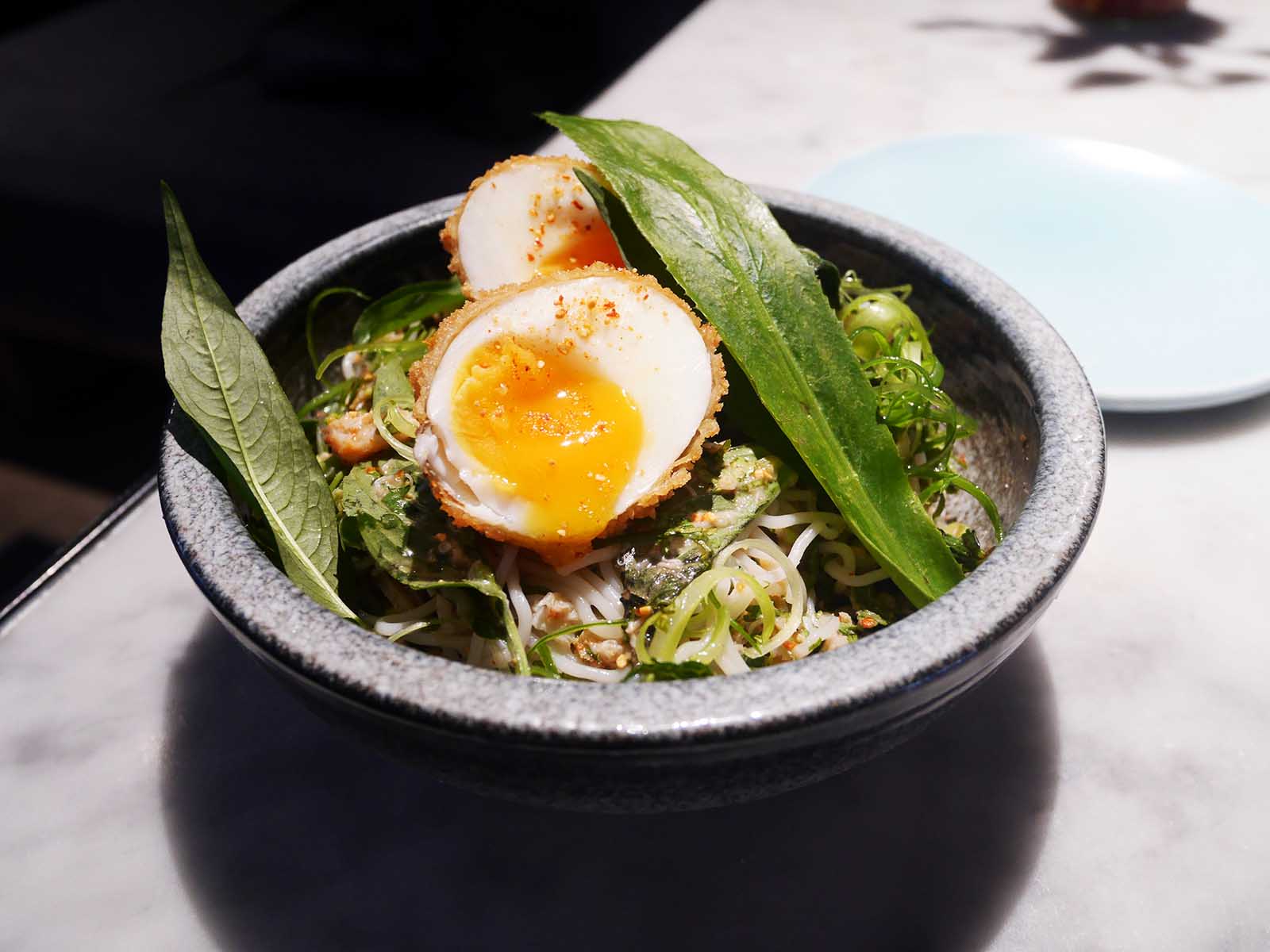 Lucky Khao is the evening offering in the Instagram worthy Red Roaster cafe, having taken over from Pike and Pine. In place of edgy fine dining you'll now find more casual, vibrant Northern Thai Barbecue. Although, the concept does fit a little better with the eclectic location I expect it will still need to work hard to attract diners to that neck of the woods and appease the uncomfortable feeling of a day/night cafe/restaurant hybrid venue. The awkward, slightly wonky, bolted on neon signage to the front isn't the best first impression.

However, once inside, the beautifully designed menu (massive back pat for the person putting together the intricate dietary matrix on the back) makes for hard choosing to be honest; there sure is  plenty to crave on it. 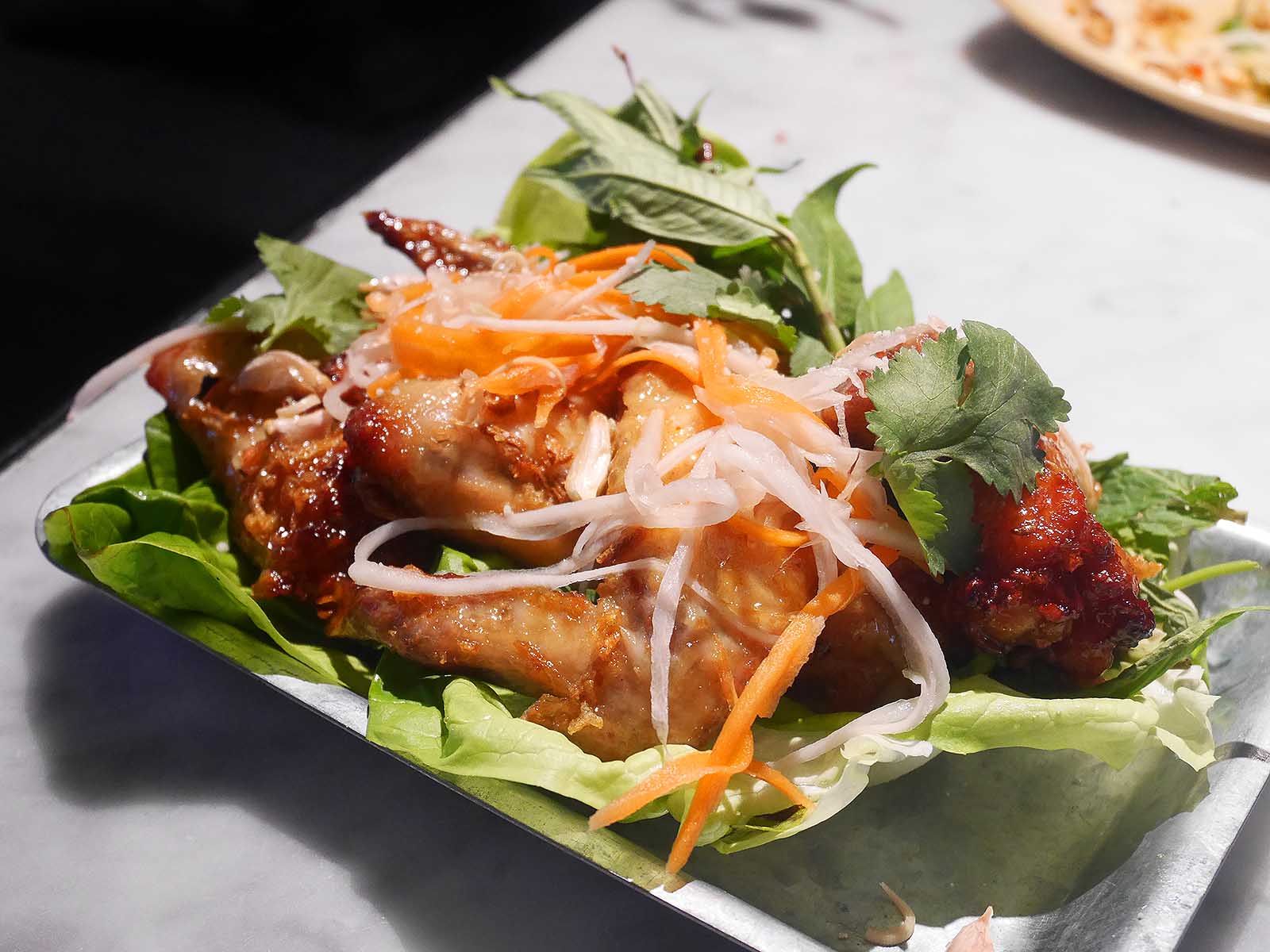 Mike's Party Wings certainly brought it. Sticky, sweet, messy and succulent chicken wings that you have no option to get down and dirty with. The caramelised fish sauce coating really is the one. 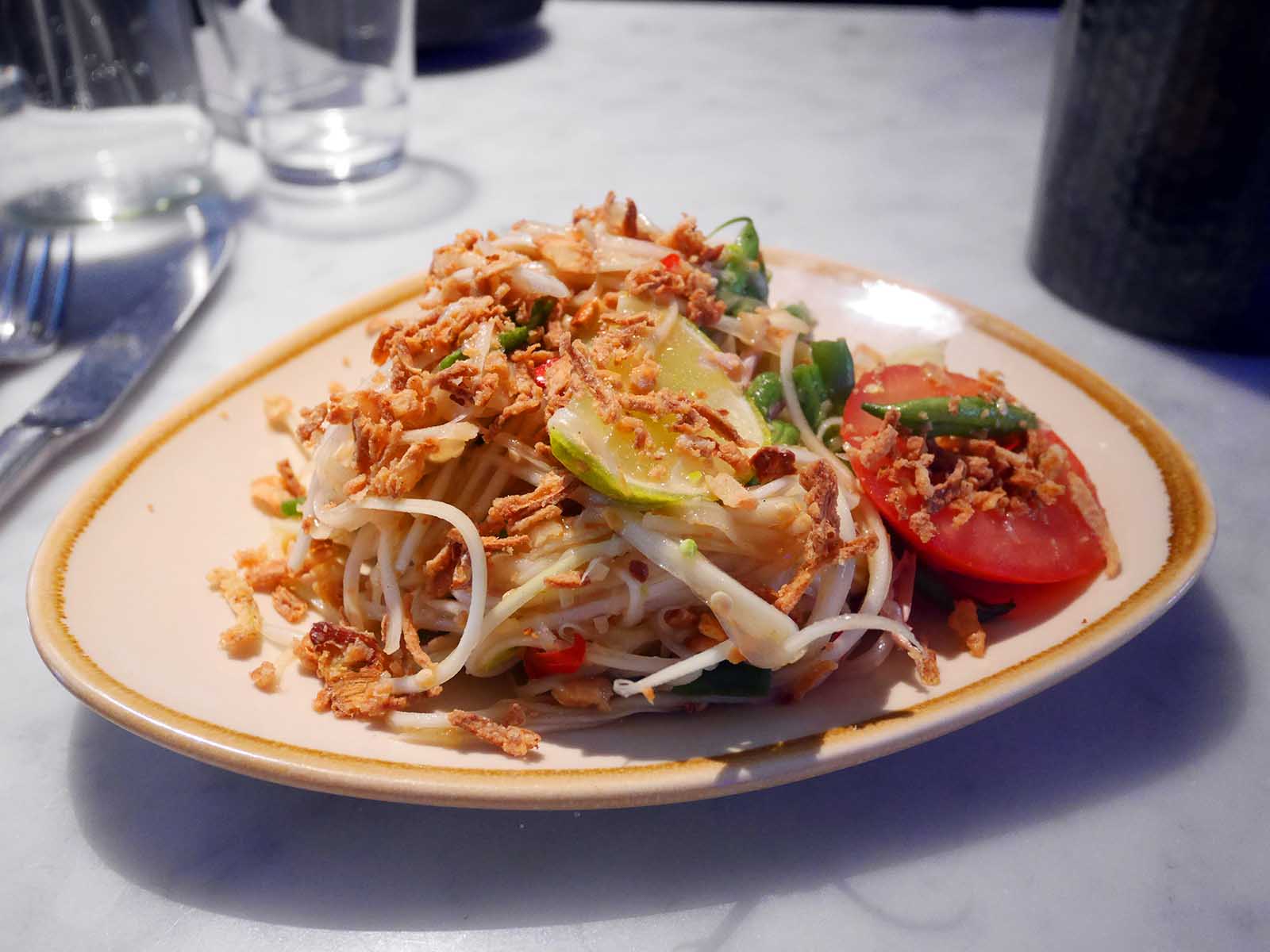 The Som Tam salad is big slap across the head of heat and flavour and comes with a necessary menu and verbal warning. This is a classic Thai green papaya salad, refreshing, pungent, crunchy, sour, a little sweet but brutally hot. Occasionally this dish can arrive limp and soggy but not here. I loved this and it's a must order. 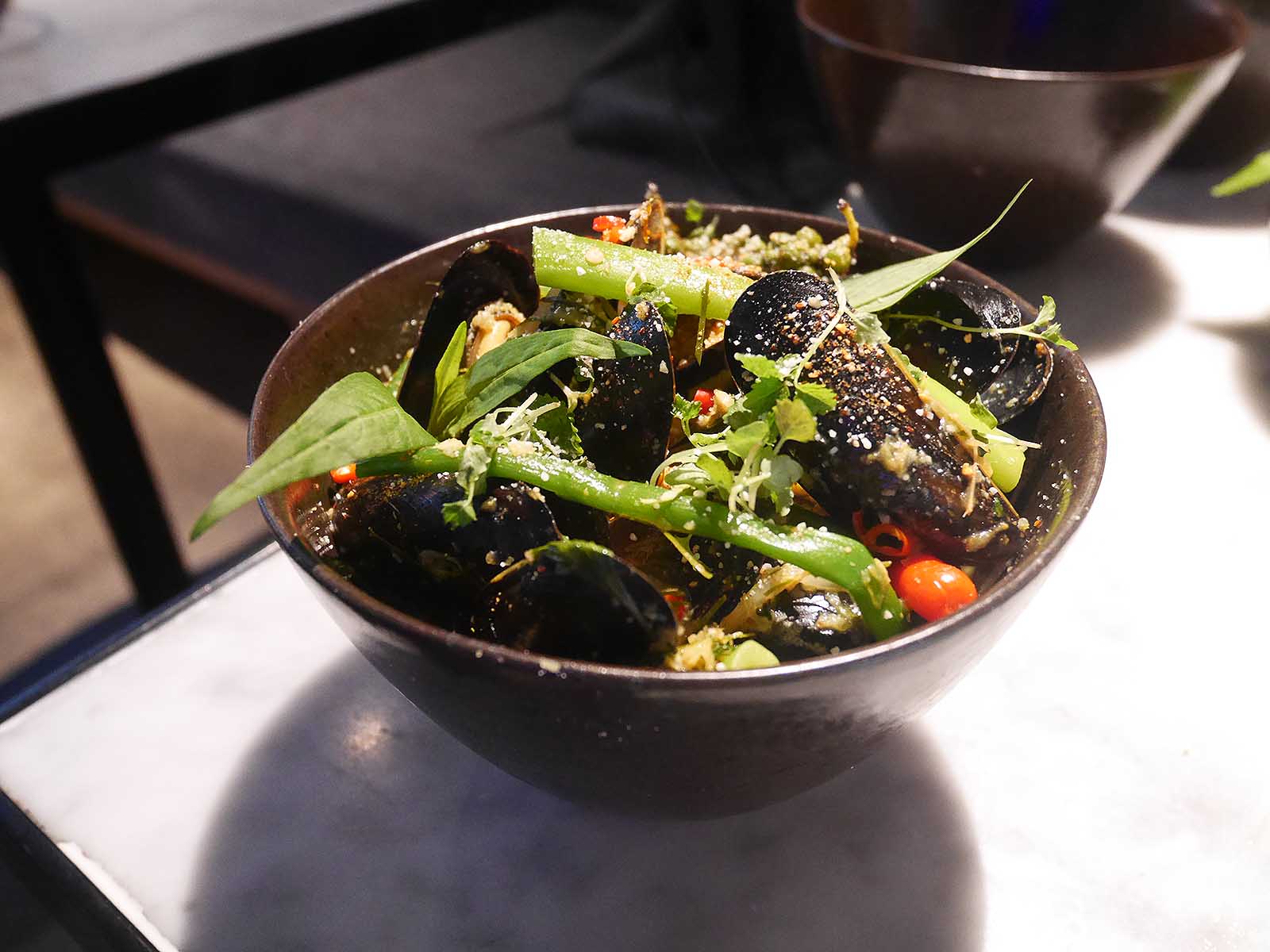 Another good one were the mussels in a deep, fragrant, warming coconut broth. Lemongrass, citrus, fresh herbs, garlic and kaffir zing out of the broth and the mussels were plump and luscious.

It was a shame the crab salad had lots of irritating bits of shell in. You had to crunch your way through the whole thing so you missed the textural benefit of any sweet, soft pieces of crab meat. Overall this lacked the punch and depth of the other dishes however the egg on top was a nice touch with a perfect yolk and fine crisp casing. 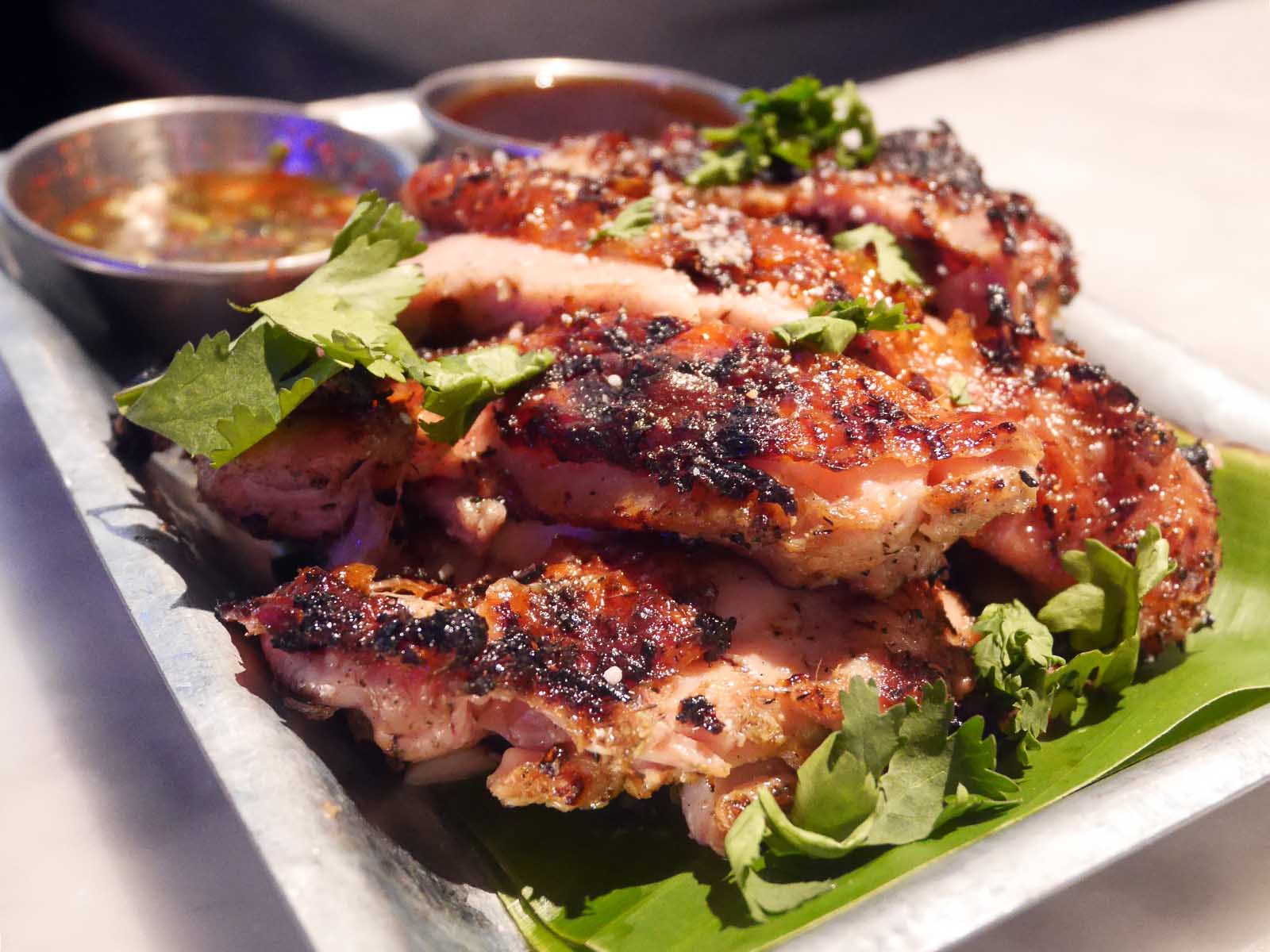 Slap bang in the middle of the menu, highlighted in red and just shy of £10, was the Northern Thai BBQ Chicken, dressed up to feel like the headline act. Sad to say it failed to excite, not having that deep smoke or tenderness I expected. And unless I had been desensitised by this point, the spicy jaew sauce could have had more pout.

The Drunken Noodles sadly had to be returned, charred fresh fire noodles sound like the most exciting noodles on the planet but arrived woefully overcooked and claggy enough to sort out my dodgy garden walls with. Such a shame as the dish boasted the meatiest of prawns, chunks of shredded smoky pork and big, fat seared scallops.

Talking of drunk, there is a good list of sharing cocktails pitchers to wash down the spice with. Having had a big evening the night before, the Thai Bloody Mary made me feel right as rain again but I wasn't in the capacity to make a decent dent in the rest. I'll leave the Khao San Bowl, that's a whole bowl of Jagermeister, to the rest of you to dive into.

As you can see this is small plate sharing style - restaurant speak for "you're potentially going to rack up a massive bill". Diners are encouraged to select six dishes amongst two and although most of the menu is well priced, a few dishes are about £2-3 too keen in reality. £16 for three chops? I know goat is pricey but that's post Brexit level. However, they do offer a 33% discount on Friday and Saturday from 4pm - 7pm which makes for an exceptional deal.


The environment is as loud as the flavours here, if you want a quiet meal, this ain't it. Music is pumping to the point where even the waitress had to yell a bit, but it works with the youth vibe and the food. The neon signs, letterboard menus and head chef Luke Larsson's trademark green mohawk zipping across the open kitchen add the edge. And if you don't like racing spice or are due to be kissing someone new after, this isn't the restaurant for you either. But where we have more dining choice than ever in Brighton, I admire their effort to be putting out something different and there certainly is a place for it here. 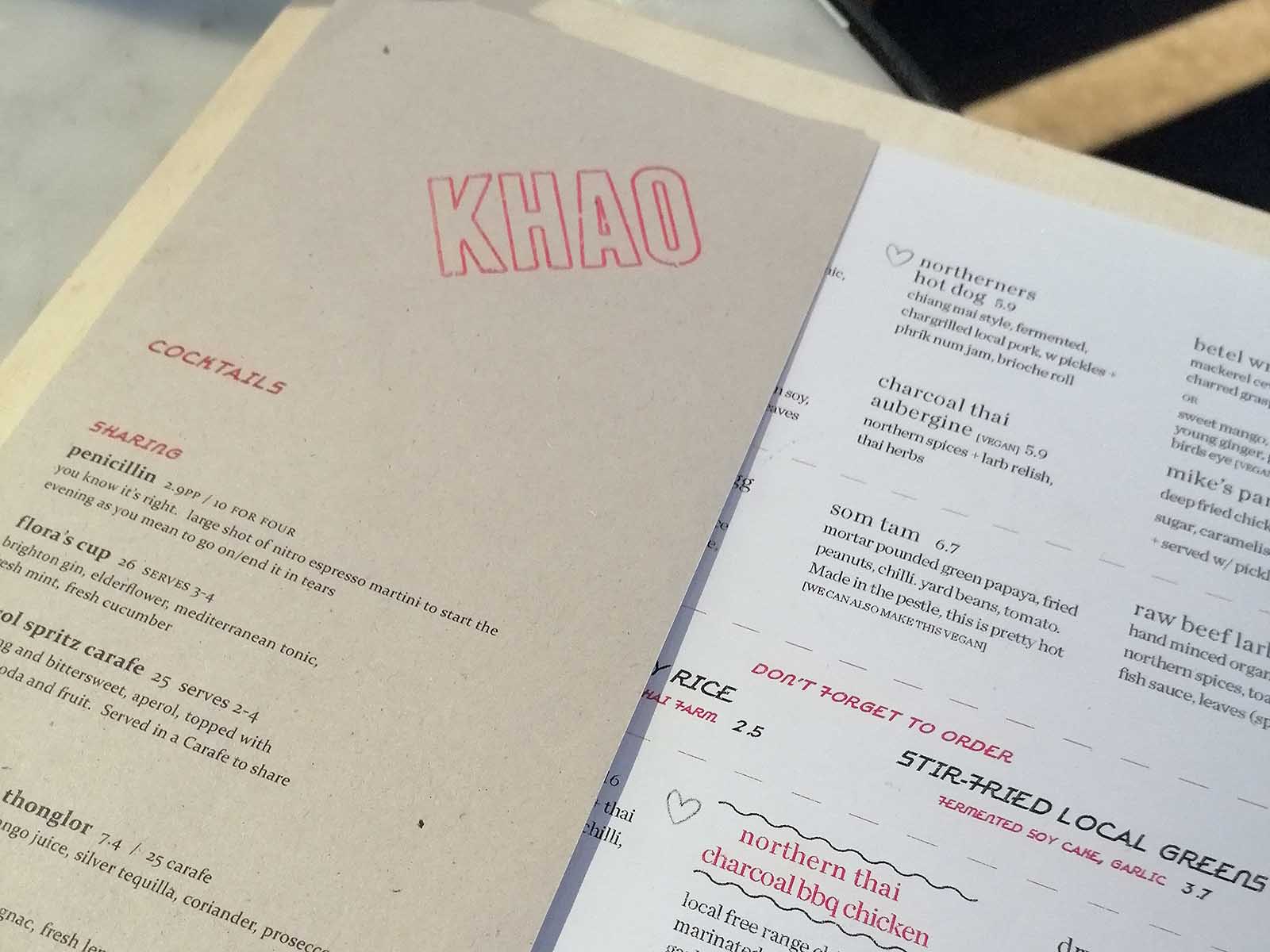 Lucky Khao really does have the potential to be very good and the style of food on offer here is very appealing. The strong start shows the level of great cooking possible but such a shame the last few dishes let the meal down. Also, a few of the menu items are the wrong style to share, or awkward with the BBQ dishes, like the curries, so you probably need two visits to do it justice. Saying that, would I return for them? Probably. 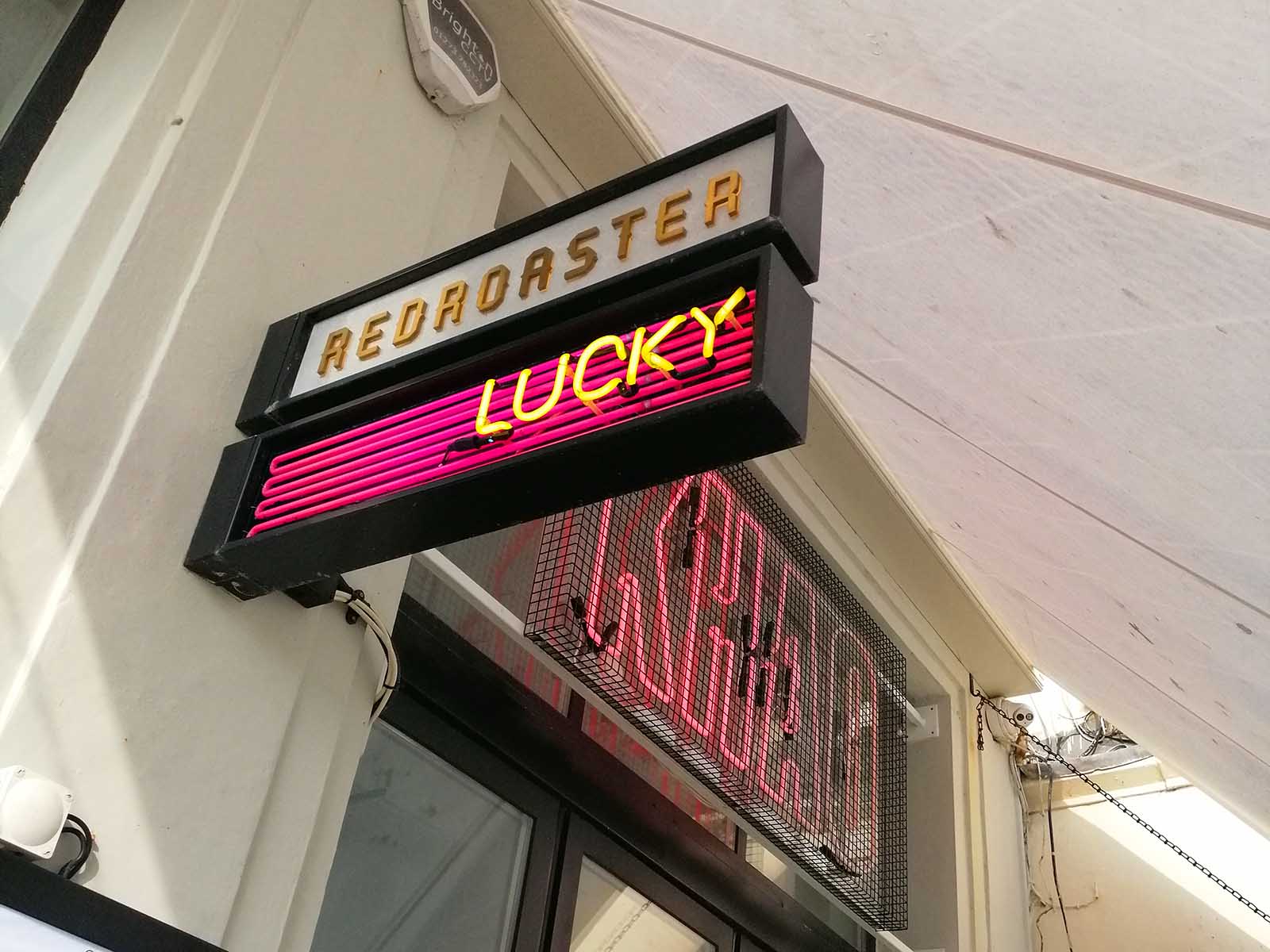