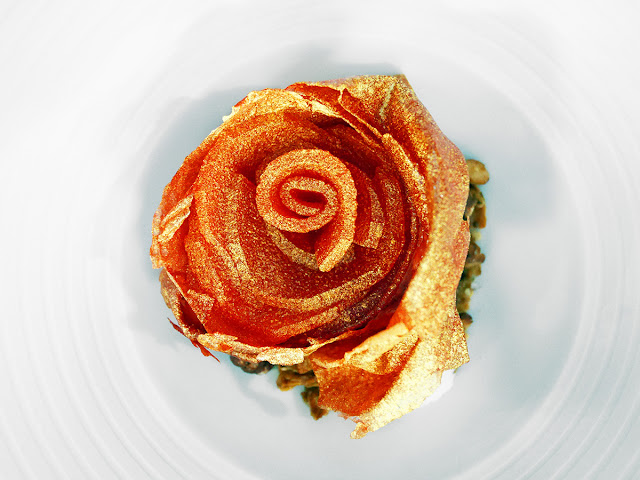 Brighton has done well out of South Lodge, a five star Sussex country house hotel with acclaimed restaurants; the three AA rosette award-winning The Pass—formerly one of the few Michelin star holders in the area—and more affordable two AA Rosetted Camellia. The Holy Trinity of freshish chef blood to the city have all hailed from their kitchen; Matt Gillan (Pike & Pine), Steve Edwards (Etch.) and Johnny Stanford (Pascere, now formerly of). So it seemed a duty to jump in the car (and we all know how much I avoid leaving Brighton to dine) and pay homage to this mothership.

Despite my travel reluctance, I do like the theatre of arriving at these piles in the country. Big, grand, loads of stone and ridiculously long drives. South Lodge itself is a really quirky mix of the old and new. Modern, twisted glass chandeliers hang in the traditionally panelled bar, classic oil paintings alongside contemporary works and none more of a contrast than The Pass restaurant itself, which does have a smidgen of corporate fit out that isn't entirely comfortable. Also, it feels as if you are sitting in the kitchen itself (well, you are) and if that's not voyeuristic enough, screens projecting the chefs at work are plastered over the walls as well. There's certainly nowhere to hide, but the hushed concentration of chefs at work is broken up by their delivery direct to the table, to explain the dishes in detail to you. This format seems to divide diners, but if like me you are the sort of person that geeks out on this style of dining, then it is certainly the place for you. 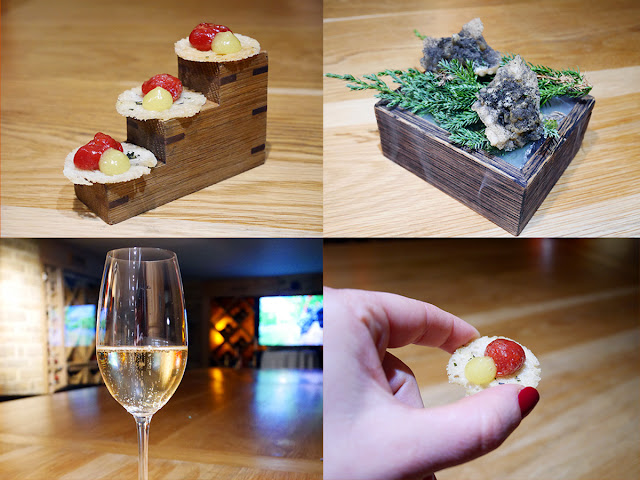 At the helm these days is Ian Swainson who arrived from the Samling Hotel in Cumbria, where he held a Michelin star for three years. And as an extra treat, Tom Surgey from Ridgeview Wines was waiting in the cellar with some of their glorious bottles of English sparkling wines to accompany the chefs snacks; a spherified tomato with olive oil emulsion on top of a fine Parmesan crisp was a memory of summers in the med, and mushroom risotto served on pine - and hey, what's fine dining without the appearance of dry ice? 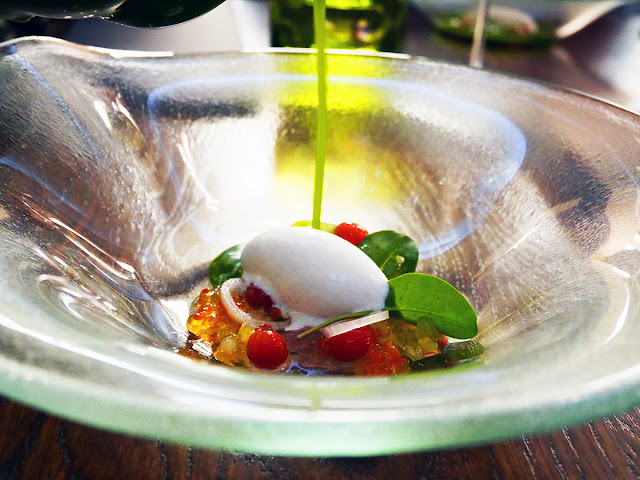 Dishes are named so first up was "Revisiting a Classic"; a present yet delicate oyster ice-cream, Tabasco pearls and pickled shallots were a serious wake up call to the palette. It was perfect with my all-time favourite sparkling; the creamy Ridgeview Blanc de Blancs. 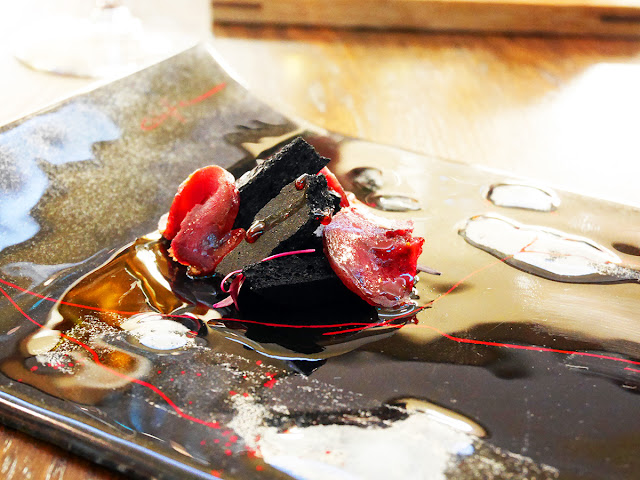 "Where it all Began", I guess a nod to primitive fire and smoke cooking, was rosemary-smoked wood pigeon, rosemary mayo and a really interesting red pepper meringue, masquerading as pieces of coal. Attention to detail extended beyond the food to the plate, streaked with fiery red to emphasise the concept. 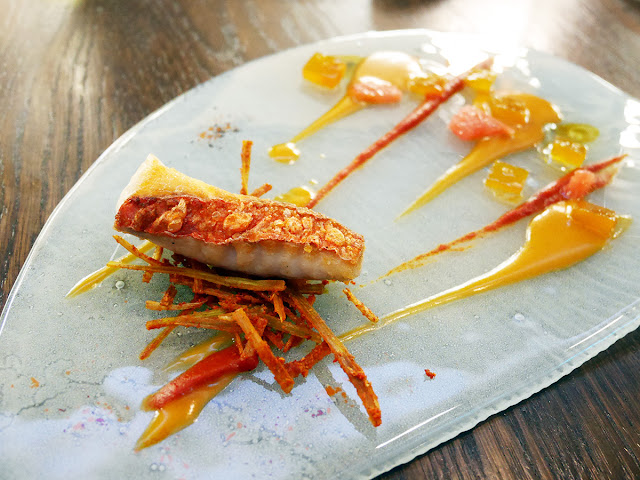 I thought this would be dish of the night for me, yet (spoiler alert) I said that about the next 4 courses. Swainson draws his inspiration from artists and with presentation inspired by Miró, looked as beautiful as it tasted. A delicate piece of red mullet was given punch from harissa, contrasting with a silky lobster bisque and accented with fresh grapefruit and candied citrus. This was made even more brilliant by the unusual pairing of a chilled 10 year tawny port with it, cherry fruits yet had the acidity to complement the citrus in the dish. 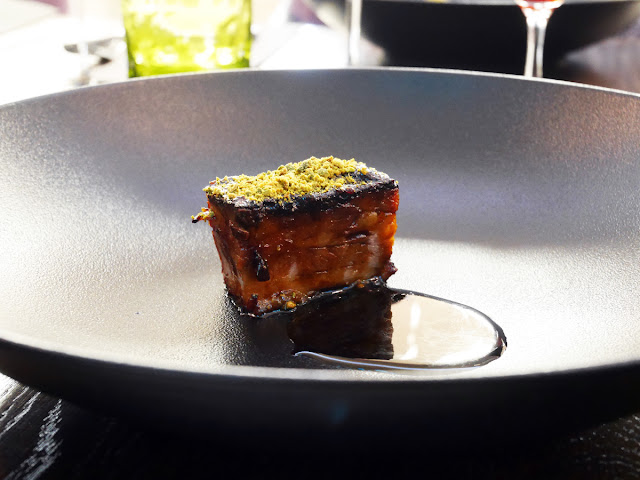 I thought Zinfandel was just the cheap pink plonk you drank at BBQs (clearly I need to sort my WSET ASAP - on the to-do). This one - Gnarly Head Zinfadel  made from vines over 30 years old (and yeah, they look gnarly), was a gentle giant, pleanty of fruit but with a little toasty smoke ideal for the incredible smoked pork rib, the smell alone of which silenced the table on arrival. The meat was cured for 12 hours then put in the smoker before being glazed with 28 ingredients, no less, giving it the desired yield. It was just a lovely, lovely thing to eat, meltingly tender, rich, sticky and sweet. 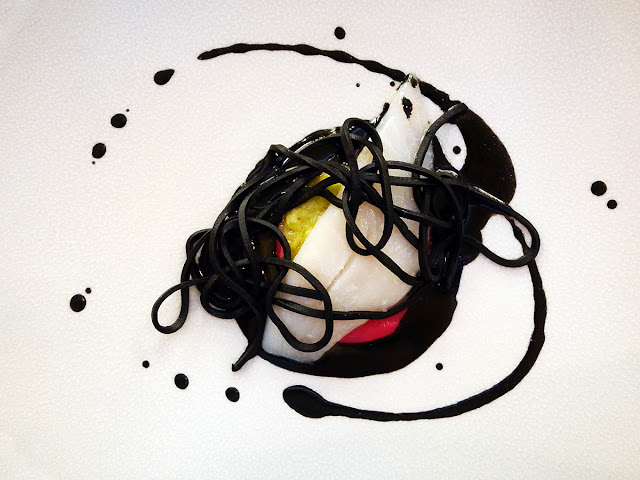 "From dark to light" wasn't just a play on the the dramatic monochrome aesthetic with soft, sweet John Dory and perfect squid pasta. The contrasting flavours and texture at play were also elements that made this a great dish too. 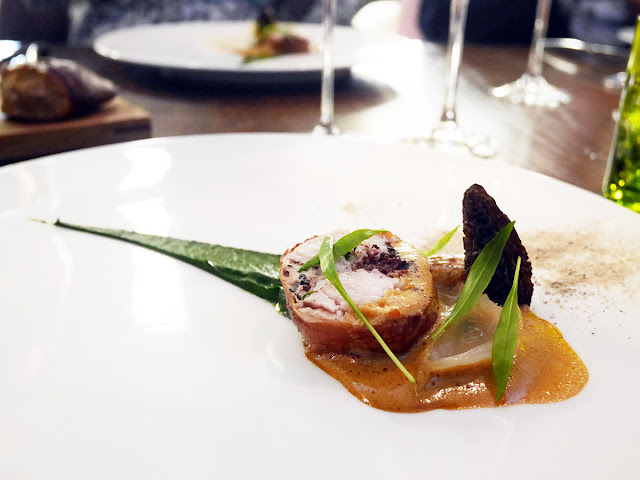 Crafted specifically for Ridgeview's Blanc De Noirs was a black pudding stuffed rabbit saddle, rabbit "cappuccino" foam, stuffed morel which I think did each other a justice. 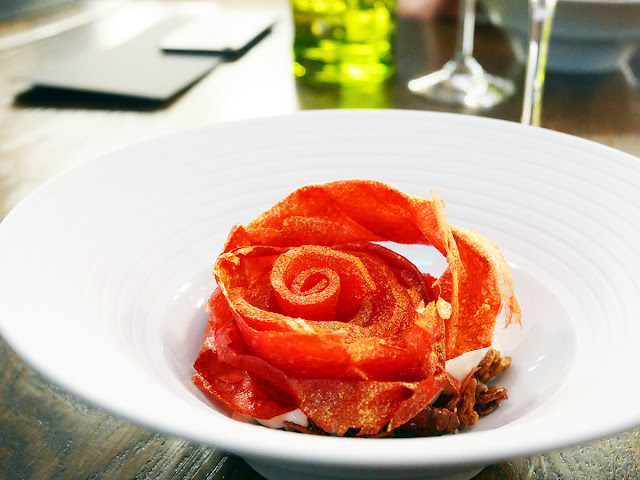 If I did have to pick a dish of the night though, gun to my head, it would have to be "Apples are Green, Roses are Red, This One's Gold". A modern take on the tarte tatin, it was an absolute showstopper in terms of technique and taste - merging childhood sweetie thrills of Turkish delight and sour apple with grown up edge from the rosemary ice cream and toasted granola. The Grenadine and rosewater compressed apple pieces were formed into a corolla to mimic a rose, surrounded by a fine rice paper and adorned with edible gold. So darn beautiful, it was almost criminal to destroy with a fork. Every now and then you get THAT dish, and this was certainly one of those. 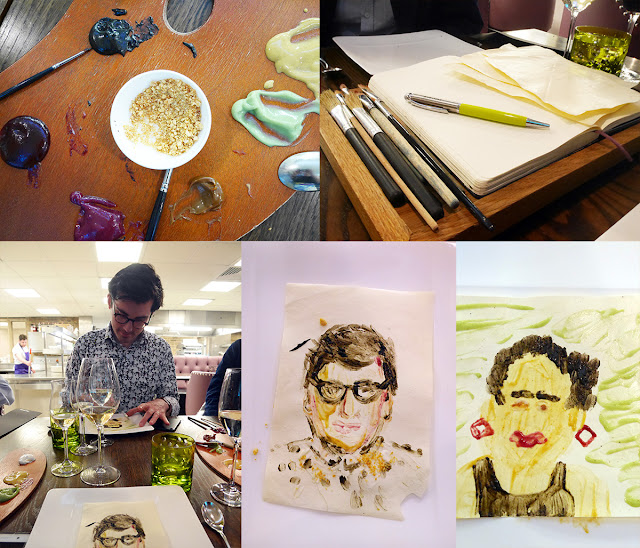 We ended the meal with a lot of fun and not something you see every day; an artist's palette of edible "paints" purees of various flavours. Alongside this were sheets of popcorn paper and brushes. Sitting opposite Tom, clearly the only sensible thing to do was a portraiture session. I think my work was certainly better than his attempt, either that or I have serious work to do on my mono brow and a resemblance to Mr Potato Head. Cheers for that!

I would say the wine parings were particularly good on the night. If you can, leave the car at home (I was kicking myself).

As you can see, I had a great time and it's always such a privilege to eat such creative, crafted and memorable dishes such as these. If you want a side order of experience and showmanship, along with a truly special yet fun meal, The Pass is a great dining option.

I dined as a guest of Exclusive Hotels. Words and thoughts, as always, are my own.
Tweet