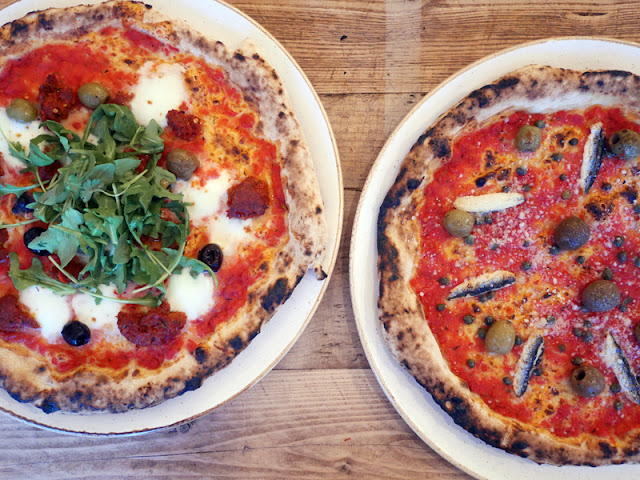 I remember a time where I was complaining about the lack of good pizzerias in Brighton. Now we have a really decent choice, so much so, that you have the luxury of being particularly particular. Along with a small handful of new independent places, the small chains have also expanded, so you're never too far from a good slice. But, of course, there is still a complete plethora of pizza that I wouldn't touch with yours.

Woodbox is one I've been anticipating. For one, it's in my Kemptown 'hood, and the fit out has been done beautifully; very modern, crisp and white with that rich blue across the whole facade. The attention to detail spans to everything; plates, glasses and the weight of cutlery, so for me, it's hitting a lot of pleasing criteria. Length of the menu is perfect - 6 or so pizzas, a smattering of starters and a dessert or gelato. Basta - it's all you need.

This place started out as a mobile pizzeria, and came to my attention by serving the Saint George's pub on certain evenings to wash the pints down with. I tried to go but the opening times and days were, well, eclectic. But now in its permanent home, where Sam's Bistro used to be, it should prove to be a useful neighbourhood restaurant.

Service was friendly, if a little shaky and slow. Drinks orders weren't taken (actually, at all) and food didn't arrive for about half an hour. For a not-that-busy pizzeria where the bulk of the food cooks in minutes, is something they need to address sharpish.

They were also out of burrata (happens of course, but with such a streamlined menu and the booming popularity of the stuff, a bit irritating). 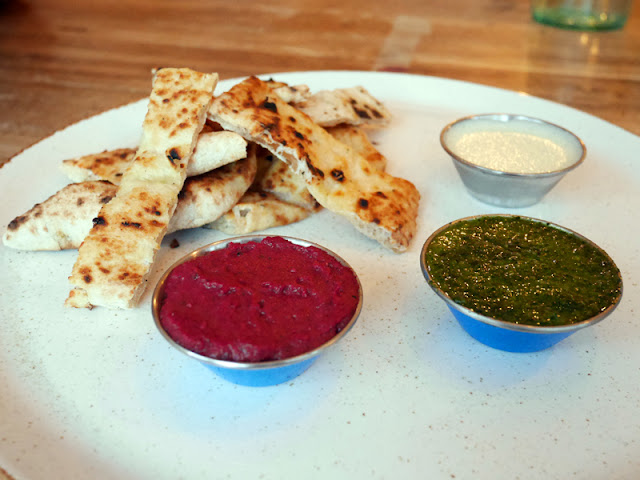 You know I never have a starter with pizza, but I was with Rosie again and the girl MUST have starters, God knows where she puts it. To be fair the pizza strips with dips were good and I enjoyed them whilst muttering about how wrong a pizza/dough based stater before a pizza is. Of the three dips the Pecorino was a firm favourite; sheepy, farmy and the definite saltiness a real bonus. 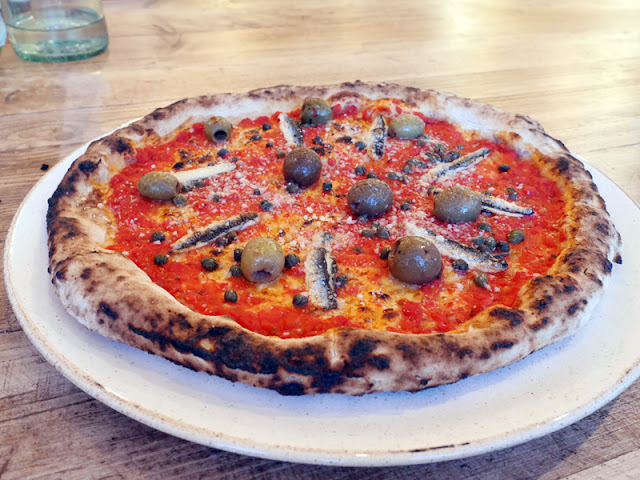 The benchmark for all pizzerias due to its simplicity is the Marinara and I'll tend to order this when visiting somewhere new, although here is it technically a Napoletana which is odd (Marinara should have just sauce, garlic and oregano). Bases were the crisp kind, none of that pillow-like Neapolitan squidginess. I'm not a stranger to this style, and I understand why some like them more than the softer bases but Jesus, that dough was tough and dry. My jaws certainly got a workout. 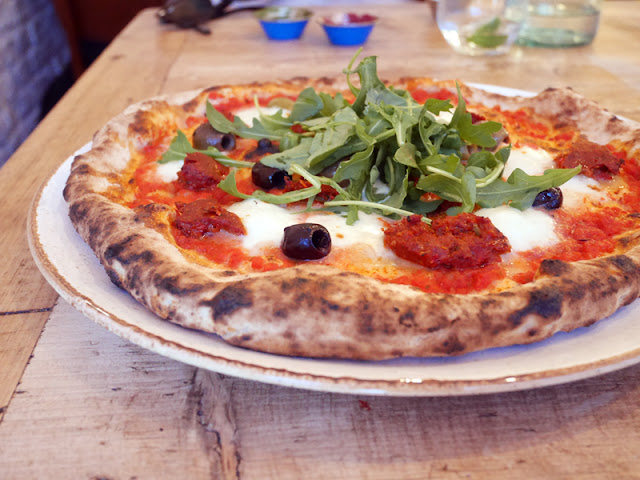 The issue was that the oven was too cold, so the pizza cooking time had to increase, therefore contributing to a dried out dough. On the other hand, Franco Manca, to cope with the demand, sometimes have it too hot which is why the dough in the cornicone, the thickest part, is sometimes a little raw.

The dough was also slightly under seasoned (as well as the sauce and the puzzling use of marinated, not salted, anchovies). For the first time in any pizzeria, I had to ask for salt. The rich, fatty nduja on Rosie's pizza added that needed oompf in flavour. For once, I think you would do better ordering an option with more topping (I never say this).

Overall it wasn't a bad pizza, and at a time, may have even been thankful for it against the majority of mediocre we had in the city. But with more choice than ever in Brighton, it may prove to struggle against the strong competition. Prices for pizza are around the £10 mark, which is also up there for Brighton although I see they do good offers at lunch.

It was great to to see La Mucca Nera gelato for dessert though. They have superb gelato, made down the road in St James' Street and I'll often be found in there post dinner with a scoop of their proper Bronte pistachio or an Aperol and bad Italian TV on. I love it. 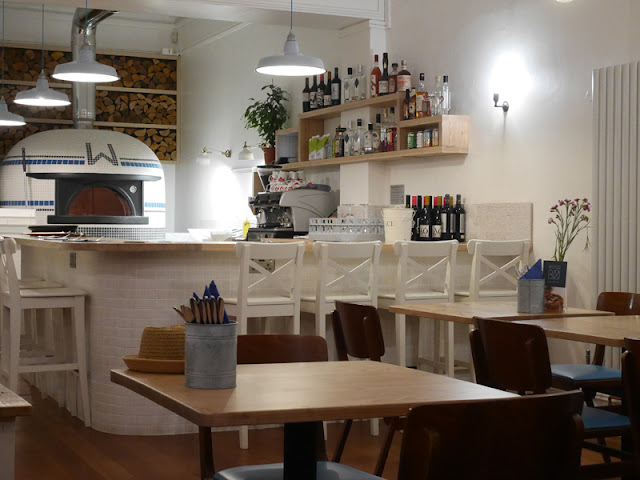 I know people wind me up about my lack of enthusiasm for fast food other than pizza but to get it right really is an art. The dough needs knowledge of craft and handling and the cooking environment critical. It's not easy! Maybe on another night the temperature will be better (drinks orders taken, service sharper, ingredients in order... ) so you will get a better result, so even though my visit wasn't entirely successful it's still very much worth a trip, particularly as they are baby new and will hopefully iron out those niggles.