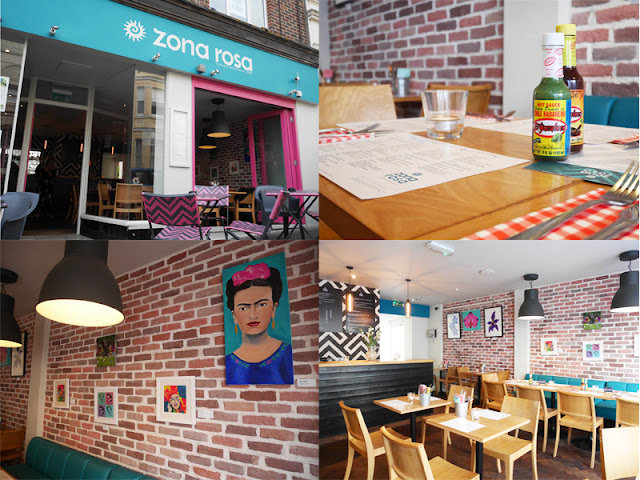 It was surprising to see the transformation of a former coffee shop in Kemptown into a hot pink and teal "Cocina Mexicana". Tucked up a side street I had wondered if the location would be right for the reinvention. But it continues to be open all day, serving breakfasts and lunches before turning into a restaurant in the evening. On paper, this seems an odd concept but cafes are turning into pop-ups and restaurants in the evening and restaurants are trying to claim additional daytime trade - it's nothing new and actually, with the full length windows open and the pretty tables and chairs on the pavement, it's an attractive little place day or night.

Our waitress recommended the nachos and, after informing us the ceviche was sadly off the menu, offered the "Playa Brighton" as the fishy alternative. I immediately ignored this and headed back to the menu, but Rosie, the little pickle, took her up despite sounding the least authentic options on the menu. 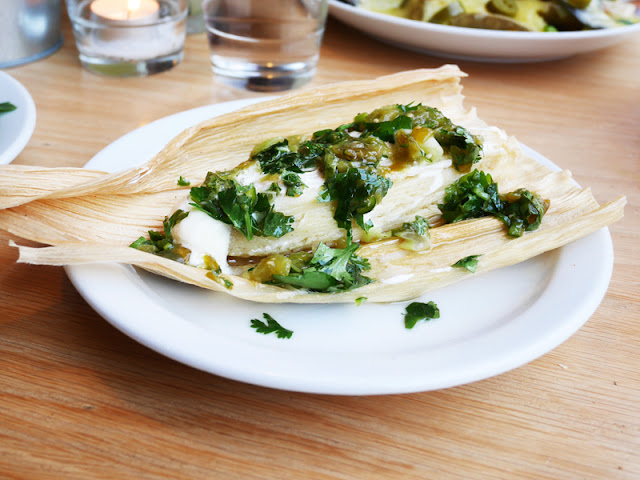 The tamale was the standout dish of the night for me. Traditional, yet something I've not seen on many Mexican menus in these parts (but then Brighton is hardly blessed with options). I'm no stranger to polenta as an Italian, but as much as it pains me to say, this was the best way I've tried it. Mexicans 1 - Italy 0. Stuffed with roast jalapenos and Sussex High Wield Ricotta (a local nod to queso fresca I imagine), this was topped with hot jalapenos and fresh coriander and wrapped in a corn husk before being steamed. Cornmeal is such a vehicle for flavour and this had it all, as well as being supremely light. It certainly gave me a taste for more typical dishes than the ones that have been tailored to the UK market. You must to order this. 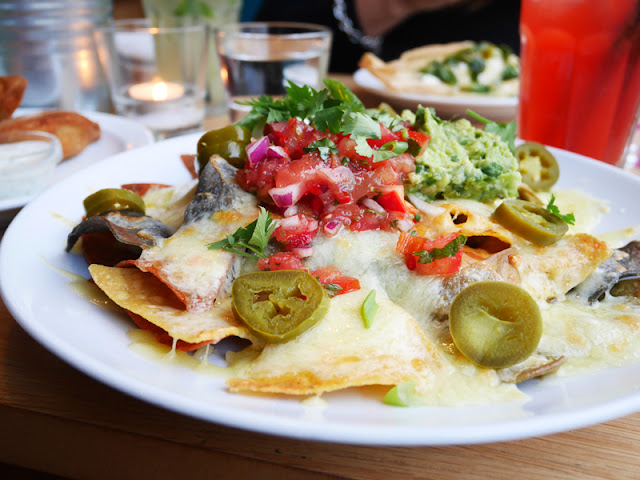 Nachos - everyone's favourite. I can give or take them and can't help feeling they were an American invention or something. Huge globs of congealed cheese commonly on top is never something I want to eat. The fact that that the tortillas here were different flavours and therefore attractively mixed colours was a bonus, and the topping was fresh with a pico de gallo salsa, guacamole and sour cream. They're fine, I'd eat them, but I put them in the stadium food bracket as an overall concept. 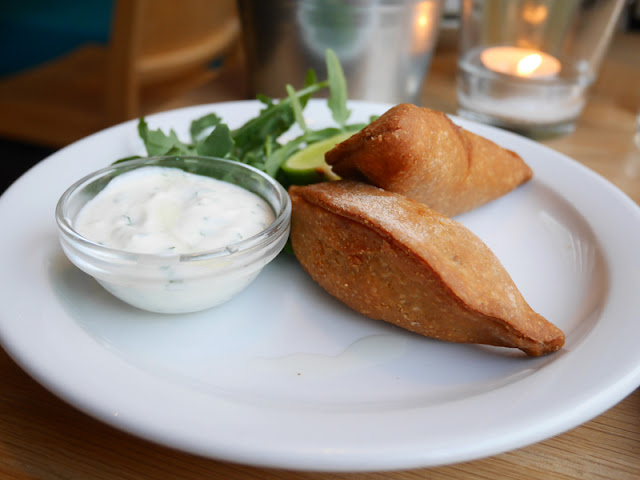 Back to tradition were the empanadas, stuffed with a potato and pea filling. Nicely seasoned, crisp and not too heavy or stodgy on either filling or pastry. Really enjoyable and the coriander and lime yogurt added a needed zing. 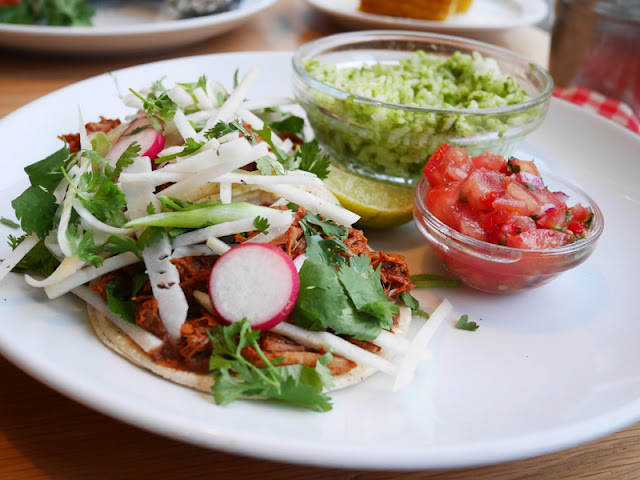 Pork Pibil Tacos were smoky, aromatic and the pulled meat tender, clearly benefiting from a decent marinade imparting both sweetness and heat. There was enough contrast between the meat and the fresher flavours from the coriander, lime and khol rabi which made the dish interesting from start to finish. The extra tortillas tucked under the tacos were both appreciated and needed. Making the whole meal substantial was a side of coriander rice and salsa. 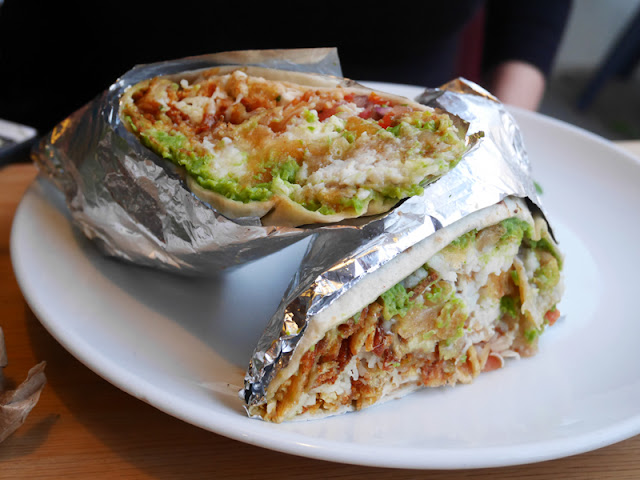 The Playa Brighton was a mush of fish and chippy ingredients with a vaguely Mexican vibe in a wrap. I'm not entirely sure what else to say from the bite I had of it. It's a nice idea I suppose, it didn't offend but I think they do other dishes so much better. 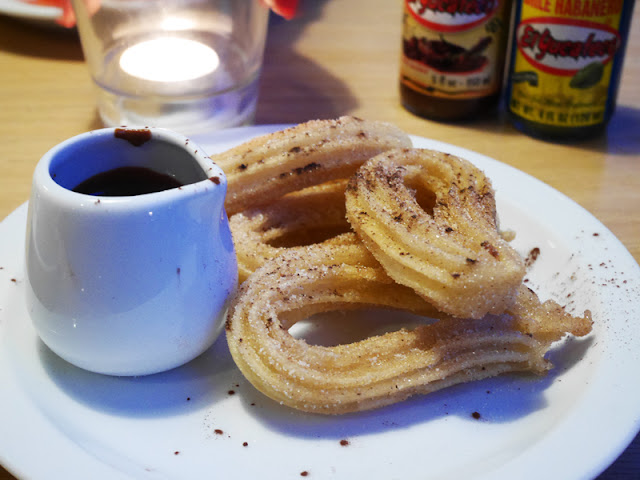 Churros (the obvious choice) were delicious and made me realise why they are so darn popular. Crisp, light and indulgent with a decent chocolate dip. Some of the best ones I've had for sure. 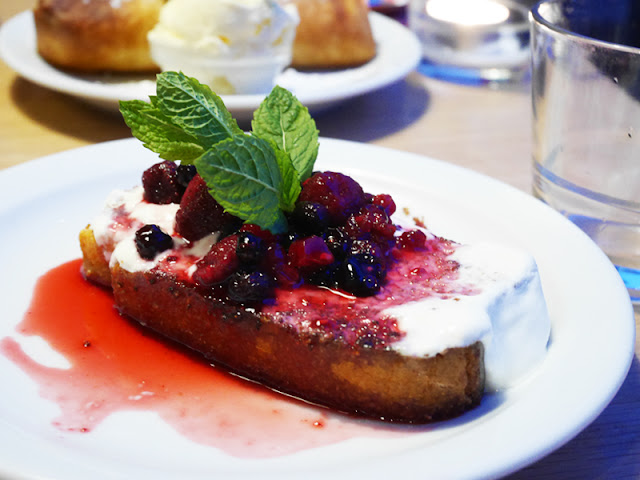 Normally I would order something more like this toasted cornbread with berries and vanilla and it arrived exactly as I wanted it, not too sweet but satisfied that need to punctuate a meal with a little something something. The cornbread had soaked up the juice from the berries - so lovely. 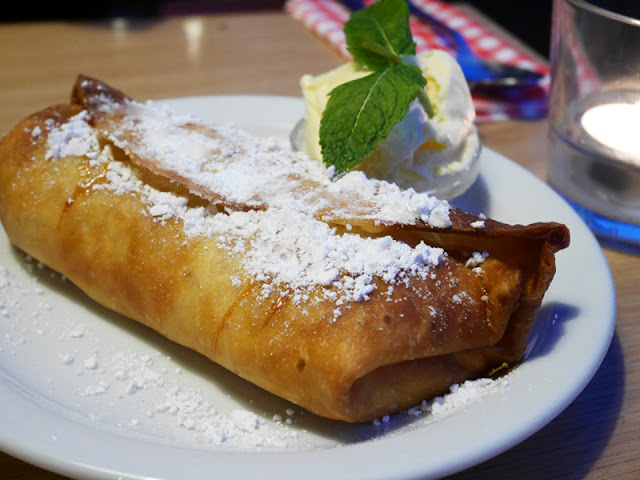 The special that they insisted we try, a fried pastry with banana filling, was ok. Fried things, hot bananas and beige tick none of my boxes really but if you like things like apple turnovers, I'm sure you'd like it (Mr GF, King of Stodge, I'm talking to you).

My hibiscus Margarita was great. Punchy and vibrant, but why it was served in a tall glass I have no idea, and I missed the salty rim (sorry, how the hell else do I describe it?!). There's a pretty good drinks menu overall - tequila, Mexican beer, horchata and aguas frescas.

On the food menu there are the the classics that you'd expect to see in a UK Mexican restaurant, but the really traditional dishes I think are ones to watch and something I hope they get a name for and expand upon. Salt cod fritters, cactus tostatas...I'll return for them all. As it's an all-day eatery, the salads and some genuinely healthy options are attractive too - quinoa, roast corn, pinto beans and spinach salads or the superfood burrito for example.

Although the atmosphere, unlike the vibrant, colourful interior, was as grey as an accountant's underpants on entering, a change of staff midway through service certainly made a difference. Our new waiter was enthusiastic, informed and delightful, and a sure example of how service can affect a dining experience.

This place used to be Spinelli cafe for about a decade, and one of the very few (if not the first) coffee shops before Kemptown scrubbed up and became all glitzy. It's been my neck of the woods all my life and I welcome the change; we have so many more options from the higher end, to classic pub food as well as bakeries, grocers and all the things that come with an invasion of monied immigration from the capital, notably the boom of cafes. Spinelli, I suppose just got a bit lost in the caffeinated noise so a smart move to evolve into something else rather than battle with increasing competition.

Saying that, a Mexican option does feel a little brave but there are plenty of diners in the area that these neighbourhood restaurants can thrive on if done well, which Zona Rosa certainly does. Meeting the owner later clearly highlighted a real passion for what they are doing and it's these independent restaurants that need supporting. Even if you don't live in this area, I think it's well worth a journey across town for. Order that tamale though, yeah.

I dined as a guest of Zona Rosa. Words and thoughts, as always, my own.
Tweet