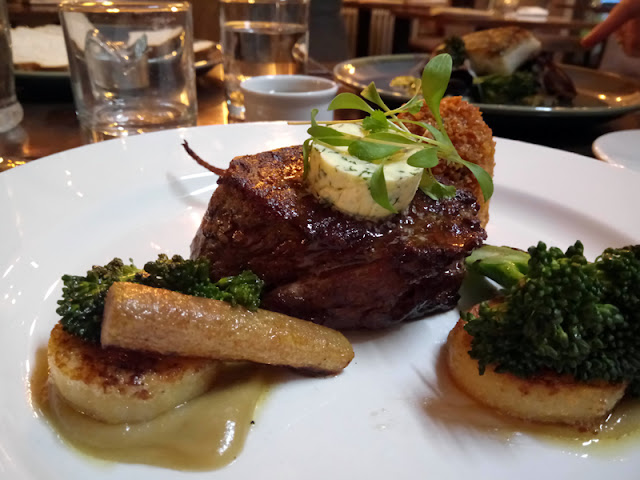 Oh the name! Yup, the name is terrible and earned them, quite justifiably, some local ribbing on opening and gave me serious reservations about the whole place. Maybe there is more in the pipeline? Fry Another Day? Dr Pho? The Man With The Golden Bun? I have no idea the thinking behind this but it smacked of suits, patting each other on the back. I know my line of day job makes me particularly sensitive to the cause, but that aside, this stuff is important.

But we're here for the food right, not a branding masterclass, so I'll stop harping on and let's get stuck in. 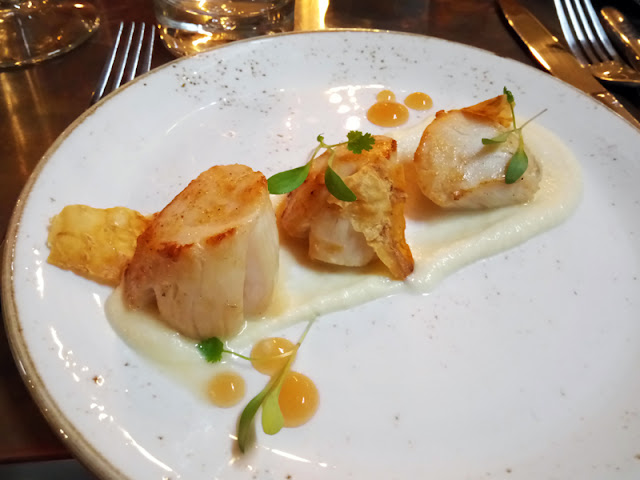 Scallops were nicely fat and juicy with just enough of a wobble left in the middle. Typically they'd be served with something that accentuated their sweetness like peas or citrus or to contrast with it like the earthy tones of black pudding, chorizo or beetroot. The chowder foam and tiny spots of quince puree seemed to do neither and I can't put my finger on the unusual flavour on the plate. Sadly, the celeriac crisps, possibly parsnip, tasted of oil not having reached the right temperature yet. 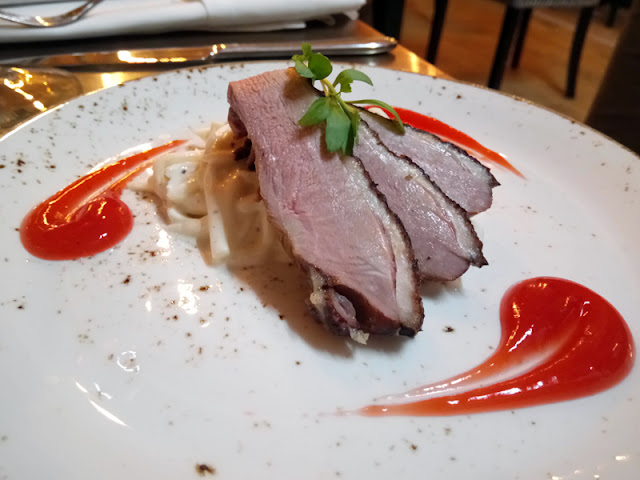 I had a small taste of the smoked duck which seemed tender although not smoked deeply enough but was nicely and simply presented with a classic remoulade of celeriac and kohlrabi, smoked beetroot and orange gel.

A good half of the main menu is taken up by burgers which in the daytime I can understand but for the evening I find unexpected. (I think when they opened in 2015 they tried to go for a burger and lobster concept.) With starters in mind (soup, scallops, smoked duck...even textures of cheese - a hangover of millennial dining if I ever saw one), I have no idea who would pair these together.

But the mains really shone and at this point was surprisingly impressed. The fillet steak, cooked precisely how I like it, was rich and flavorsome. The oxtail and marrow croquette had a silky and decadent centre and perfectly crisp exterior. Everything was harmonious on the plate; confit potato, broccoli, artichoke purée...I really enjoyed the whole dish. It's the simple, solid cooking I think Skyfall should be offering as standard. 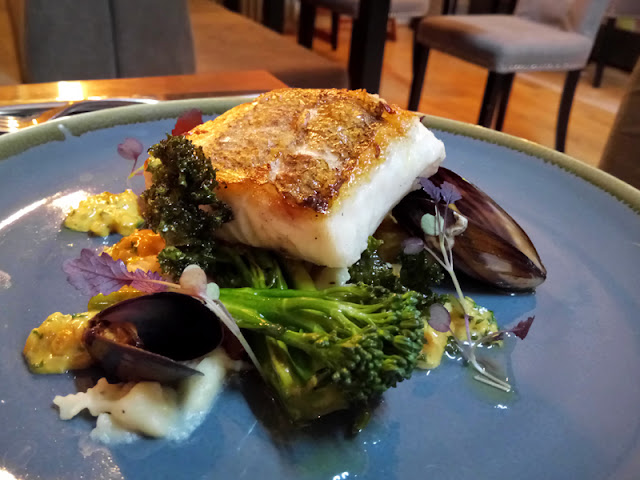 The "taste of the sea" was just that with a generous portion of hake, with mussels citrus pomme purée, fennel seed carrots and paella jus. This dish may have not invented anything new and the listed kale replaced with broccoli, but is the sort of dish you'd happily dive into, nicely presented and beautifully balanced. 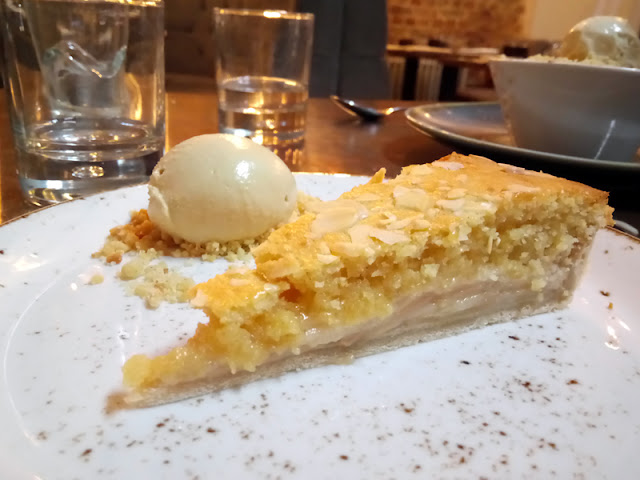 Sadly, desserts took a turn for the mediocre again. My "salt-baked" pear and almond tart was over selling itself, the pears undercooked so the thin layers splayed out once you took a spoon to it. I'd be surprised if they were salt baked, or baked at all. And there was no basil ice-cream that I could detect on the plate and menu omissions without warning are really irritating. The bakewell-esque top was good and would have worked well with the fruit at the right texture. 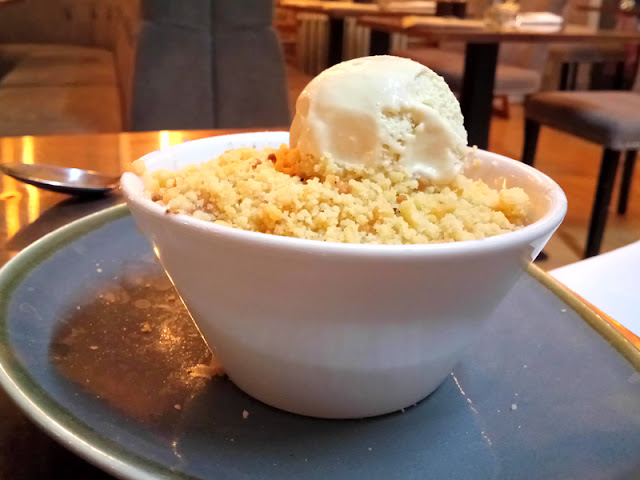 I didn't get much of a taste of the rhubarb and rosemary crumble but judging my the overflow on the side of the bowl, I'd put money on the fact the the fruit had been zapped to boiling in the microwave before the crumble topping added. And the rosemary, a gorgeous partner for rhubarb on paper, was being shy.

Also, the "homemade" bread looked and tasted very much like a bog standard supermarket bakery loaf. If it was homemade, which I doubt, they did a good job to make it seem otherwise. 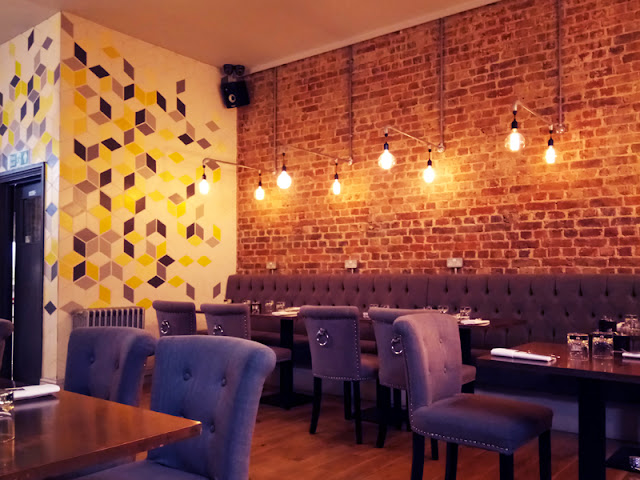 The interior is nicely done, smart, bright and with a modern flair. They have captured a style that works for both day and evening dining and the set menu, served every day excluding Sunday, is a steal at 9.50/11.50/14.50 depending on course numbers. The also do weekend brunch, Sunday roasts and the children's menu is a decent example. I noticed around all the walls were plug points so probably a good shout for meetings and freelancers to drop in in the day.

Service was fine, if a little quirky, but it's always good to have a bit of personality rather than formality at times.

Although there was some highlights for the meal, and the environment has been very well considered, Skyfall certainly needs to try a bit harder in areas. Despite this I was still surprised we were the ONLY diners in past 8.30 - I saw just one table being cleared on my arrival. Yes it was a cold and dreary Wednesday and the early part of the year is lean for many restaurants, but it's sat slap bang on Church Road and with other restaurants nearby doing well. The others have a clear niche though, in particular Fatto a Mano who offer everyday priced food and very good food at that.

I think the issue is that Skyfall is trying to offer too much and being presented in such a premium wrapper makes it feel like it falls a little short of its promise. 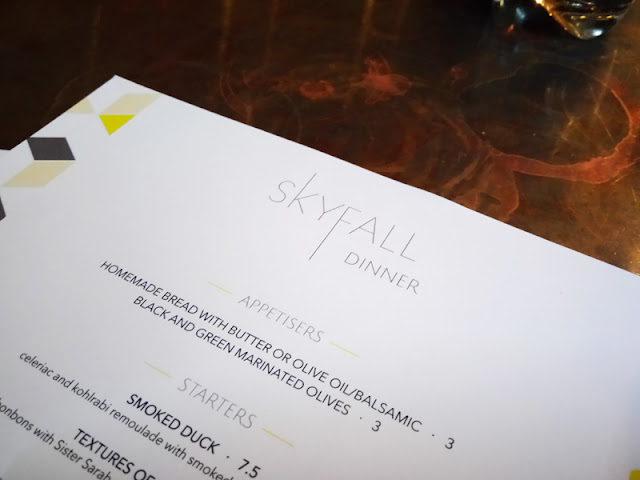 I dined as a guest of Skyfall. Words and thoughts, as always, my own.
Tweet