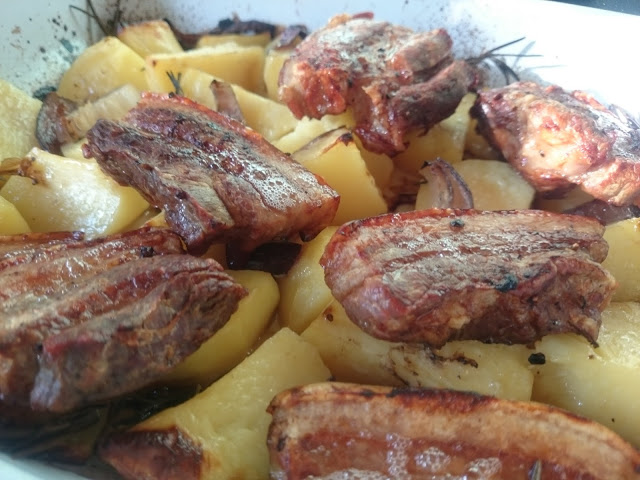 Mr GF, who thinks I'm turning him vegan with my streamlining of our meat consumption recently (I'm not, I'm just trying to buy better, less often), thought it was his birthday or something when he saw we were having this for dinner.

It's simple to prepare and great if you are self employed at home like me ideal to throw it together in 5 then pop in the oven for 1.5 hrs. The potatoes will cook in the pork fat too so the flavour is fantastic.

This was another of my #organicunboxed recipes that I created with my mystery box of ingredients. The pork was from The Well Hung Meat Company based in Devon. Their animals are grass fed and dry aged on the bone for up to 28 days. Plus they don't use any freaky chemicals, opting for traditional and sustainable farming instead. I know full well that had I bought this meat in the supermarket, the amount of water released in cooking would have been quite considerable. Plus the flavour of this meat was superb. I don't think all produce needs to be organic but one area that does benefit is meat. 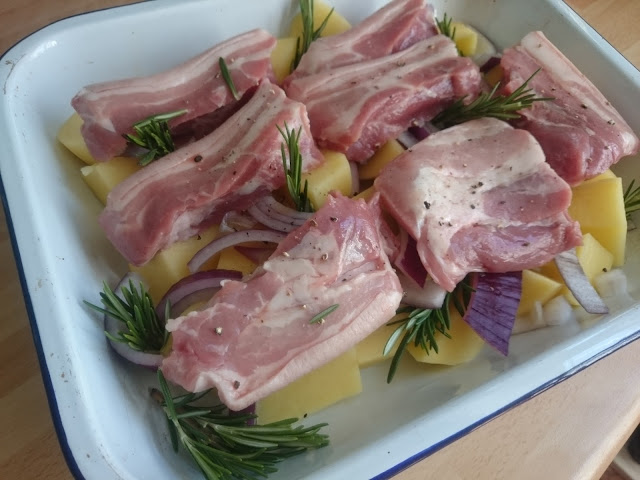 Preheat the oven to 200C

In a baking tray, lay the potatoes in a single layer. Scatter over the red onion then lay the pork strips on top.

Break the sprigs of rosemary into a few pieces then tuck between the meat and potatoes.

Roast for 1.5 hrs, tuning the meat half way through.

Remove pork strips, keep warm and rest for 15 minutes. Meanwhile, return the potatoes to the oven to crisp up a little.
Tweet