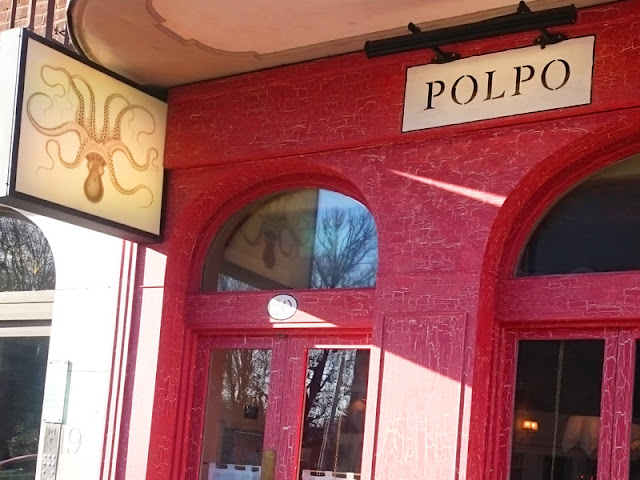 Hype is a really important ingredient in a new restaurant opening. As important as the menu and decor, the excitement of the latest must-eat will inspire hoards of people not wanting to miss out. And Polpo, the much loved Venetian small plate restaurant with a loyal London following, has been one of Brighton's hottest tables to dine at since opening in December. And, being an advocate of any (seriously, ANY) sign of decent Italian food in this city, I've been keen to try it out too. Short of spag bol and other sins, we are not. 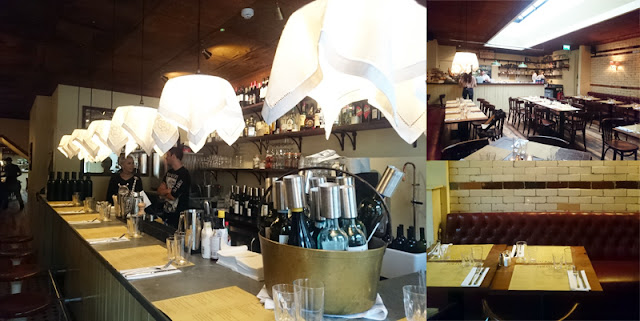 The interior style mimics the London restaurants, which somehow merges traditional Italian needlework with edgy distressed finishes. It's really quite lovely and unique.

As I said, the menu is small plate (meaning big bill) and includes cicheti and a variety of classic and slightly tweaked dishes like arancini, osso buco, crab linguini, cod cheeks with lentils and cauliflower and fontina gratin. 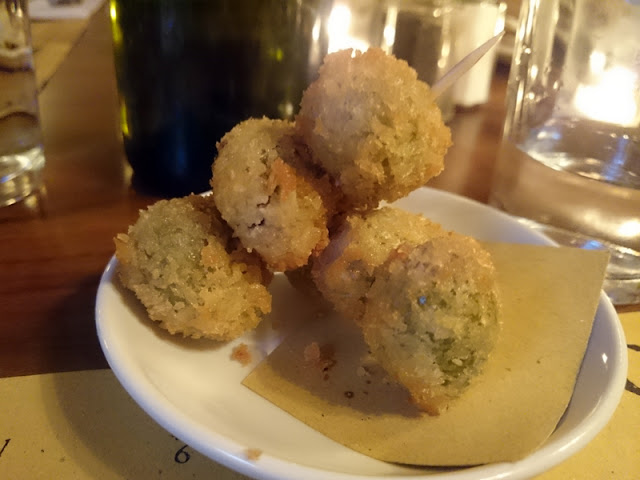 I had to have some of the stuffed, deep fried olives. They are my favourite things and these were juicy, filled with salty anchovies and had a crisp breadcrumb shell. A pile of these and a glass of Franciacorta and I'll be a happy woman.

We chose a broad range of dishes Polpo are well known for (I've never eaten in their London locations) but I think the menu deserves to be delved into a little deeper. I could have happily eaten pretty much all of it. 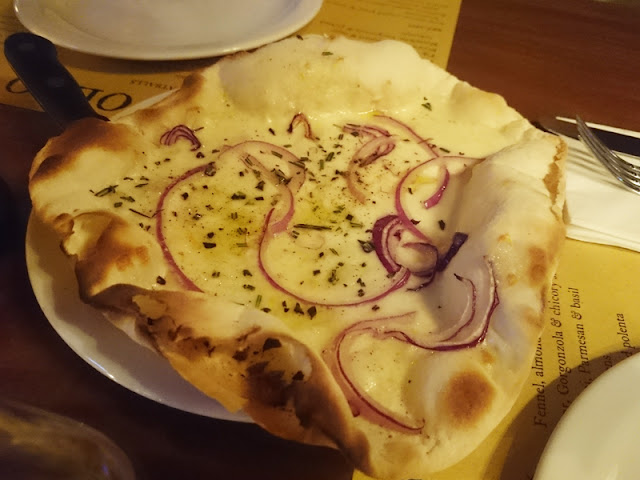 The small pizzette are of the very thin crisp style, more of a topped flatbread than pizza as we know it and neither Roman nor Neapolitan. The generous scattering of thyme and thin slithers of red onion infused the mozzarella cheese of the Bianco pizzetta beautifully and was a delicious start. 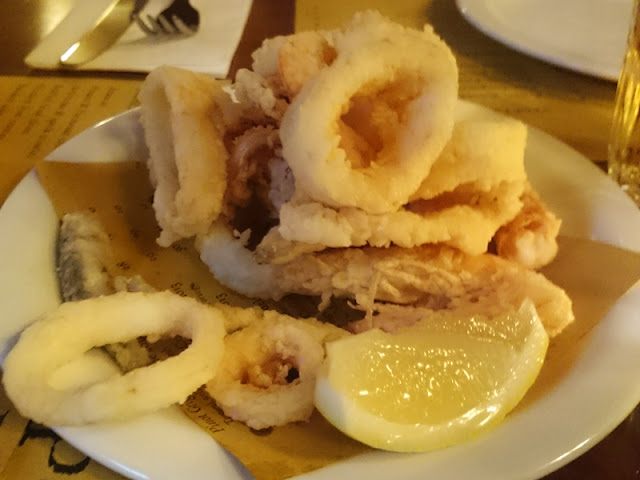 I would have expected my £9 small plate of fritto misto to have been much better than it was though. The calamari were surprisingly rubbery and the whitebait bitter. The small, single octopus was the best element but the batter just didn't have that gorgeous crispness that a good fritto misto lives or dies by. 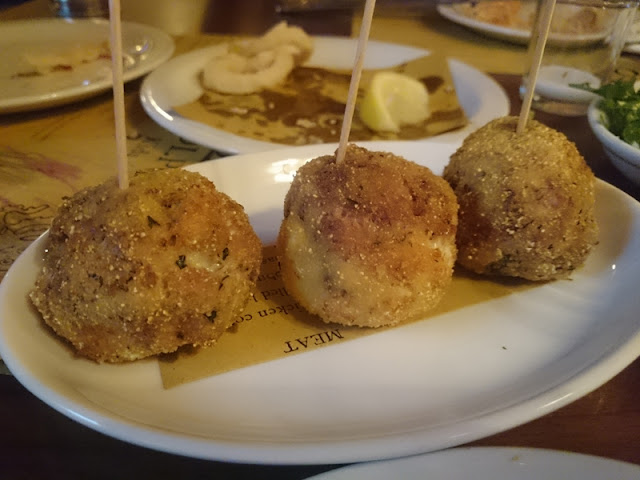 The coarseness and texture of the "famous" meatballs was spot on and the addition of ricotta a good element but they were salty to the point of being inedible. Coated in polenta and deep fried made them succulent but the heavy hand of salt ruined them. But still, seeing through that blip, I'm wondering what the fuss is. It's a simple home style Italian meatball and at £7 for 3 was creativity priced. If any of my Italian family found out I'd paid that, I'll be fending off the rolling pins. 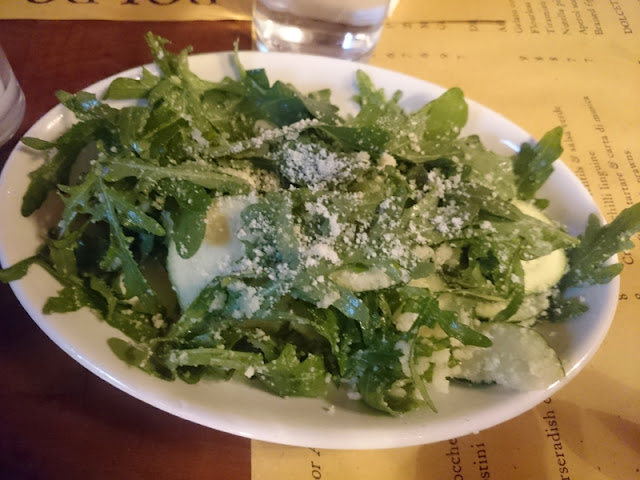 The salad of raw courgette slices and rocket, doused heavily in parmesan was exactly that for £5.

The only beer they have is Moretti which with Italy's renewed enthusiasm for brewing, was a bit disappointing. Throw us a birra Rossa or a doppio malto that could give most craft beers a "ma va fa..." maybe.

I was actually dining with my children on this occasion and was surprised how welcoming they were to small kids. It wasn't the sort of place I would expect crayons or a kids menu but they had both. For the little ones there are well priced options that mimic the adult menu and thankfully no bloody chips. However, my almost four year old was happy to dive in with our dishes this time.

Service was superb. The team are clearly well trained up on the menu and very accommodating. I liked the laid back style with enough professionalism to keep it from being too informal.

I would expect my wine to be served in a tumbler in a relaxed Italian restaurant (and my home!) so this wasn't an issue for me but contentious to some. Wine list OK but my upgrade to a small 25cl carafe for a bog standard Trebbiano stung me for £8.

Look, real Italian food is generally no frills, simple and ingredient as hero. It always will be. It's not rocket science but gets muddied up with Anglo influence and trying too hard or pushing it too far. Polpo at least keeps the ethos of simplicity at its core which I like.

So to summarise, is it one of Brighton's best Italian restaurants? Probably, but that's not saying much as we are thin on the ground with them. Is it as good as my mamma's exceptional traditional  Italian cooking or that of any decent, cheap trattoria in Italy? Definitely not. Although I left underwhelmed, I'll give it a second shot despite feeling it was a touch too expensive for what it is. The bar area is nice enough for a cocktail and cicheti or two if I'm feeling particularly spendy again.

In Brighton, we all get a bit excited when the London names look to locate here, but generally, aside from a few restaurants I'd love to see here (Wahaca is coming in April which should do well), I think we're OK as we are with our homegrown independents. 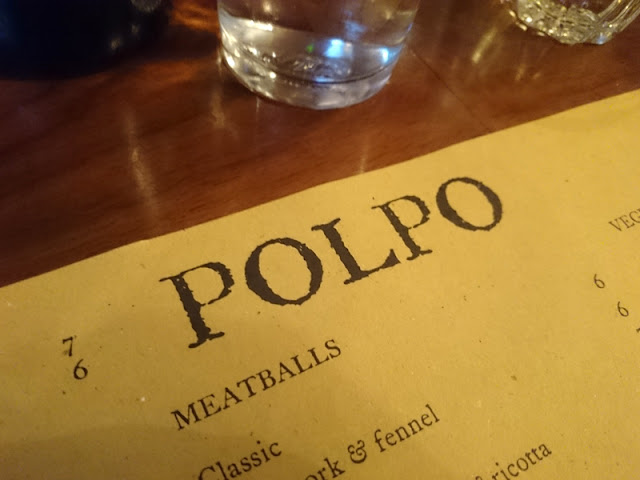