in brighton, italian, restaurant, review - 29 September 2015
Obviously, one of the most frequent questions I get asked is where the best Italian restaurant in Brighton is. Well firstly, I have a hard time recommending any in the city and secondly, there's really no such thing as one. Divided by regions, which may as well still be different countries, Italian food is as varied north to south as it can be village to village.

But Brighton Italian food has predominantly been that Anglo-Italian jumble where hideous dishes like "spag bol" sit awkwardly next to portions of fish and chips on tourist fodder menus. As you can tell, it makes my blood boil and my arms do some sort of over dramatic Italian gesticulation. 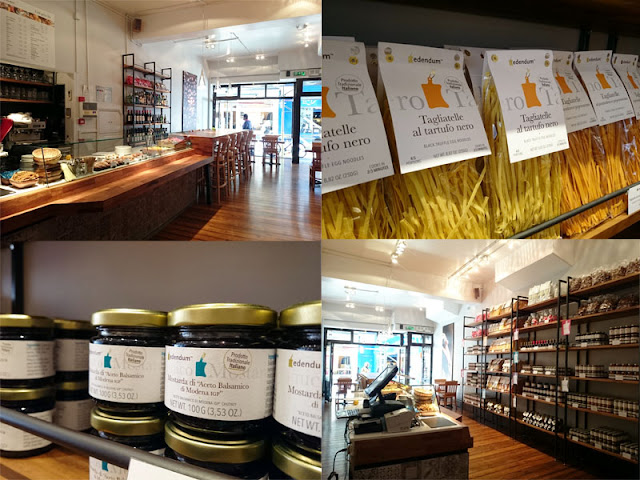 So I was more than interested in the opening of Edendum (latin for eating) a new restaurant run by a family from Piedmont. Owners Diego and Lorenza Cacciolatti have been successfully producing the branded jars and packets of food that line the walls for purchase and have settled on Brighton for their first restaurant venture. Forget the red and white checked tablecloths and candles in old, straw covered Chianti bottles. This is a smart, modern Italian restaurant you would typically find in any Italian city. 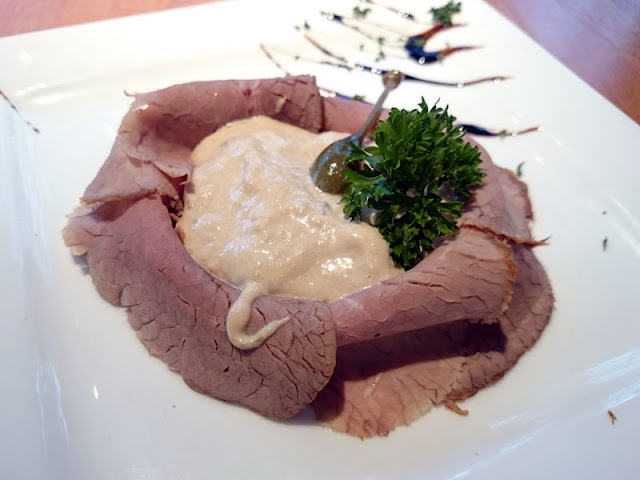 I started with one of my favourite dishes; Magatello di manzo con salsa tonnata. Normally I would expect this sauce to be served with veal, but the paper thin, tender slices of beef medallion were delicious regardless. I hear you. Meat with a thick, creamy, savoury tuna sauce doesn't work mentally, but honestly, you must try it. Umami central. 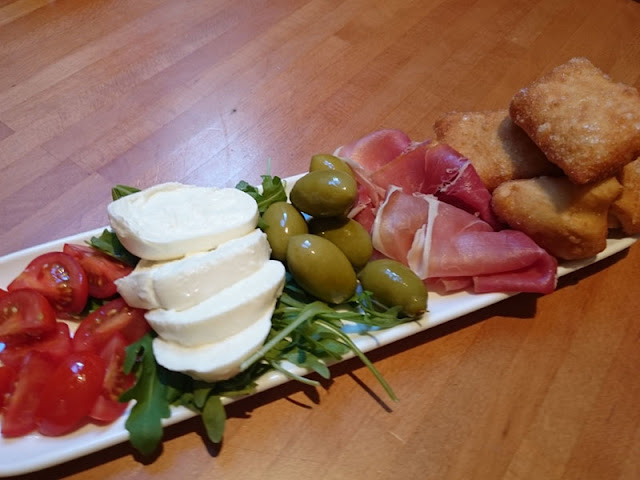 Something I wouldn't have ordered but came recommended were the gnocco fritto, which are deep fried, puffy pieces of pizza dough. Again, on paper you would imagine this as some sort of Pizza Express dish (I'm still digesting one of their dough balls I ate in '89) but these were pillow light, well seasoned and moorish. They were served with Parma ham, flavoursome Pachino tomatoes, creamy and sweet buffalo mozzarella and huge Cerignola olives, all of fantastic quality.  It would be well worth popping in for a glass or two of wine and this dish which also comes in a larger size with salumi and cheeses.

The rest of the menu is vast with classics like king prawn and saffron risotto and regional specialities of aubergine and mint cream soup. There is also a full pizza menu, making their own dough on-site. I did peek at another table and it did look quite good. One for the pizza list for sure.

They also have possibly the best kid's menu in Brighton as far as Junior GF is concerned. Pollo alla milanese, oven-baked salmon fillet, a small pizza or bowl of pasta with either oven baked potatoes or a side salad. Fruit juices were the pulpy Italian succos and you also got fresh fruit or small portion of pannacotta for dessert. It was a joy to be able to let him order anything on it and the generous portions of proper food is what all restaurants should be offering children. Not a chip or processed meat nugget in sight. 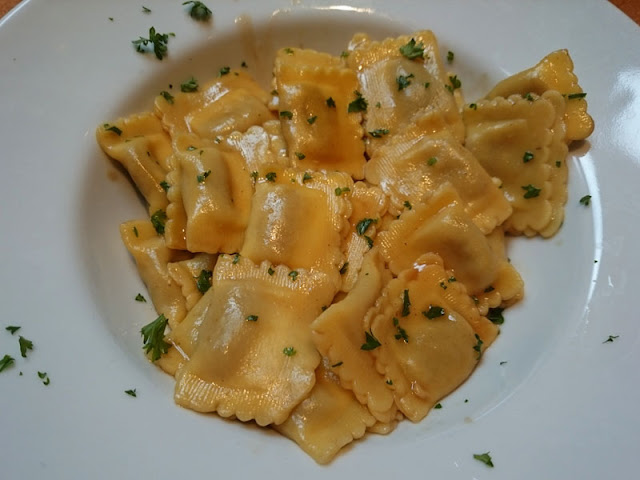 With our son happily tucking into his plate of fusilli with fragrant Neapolitan ragu, we chose meat ravioli with butter and sage, which were silky, refined and full of flavour and the more unknown Panelle di ceci - Chickpea croquettes. 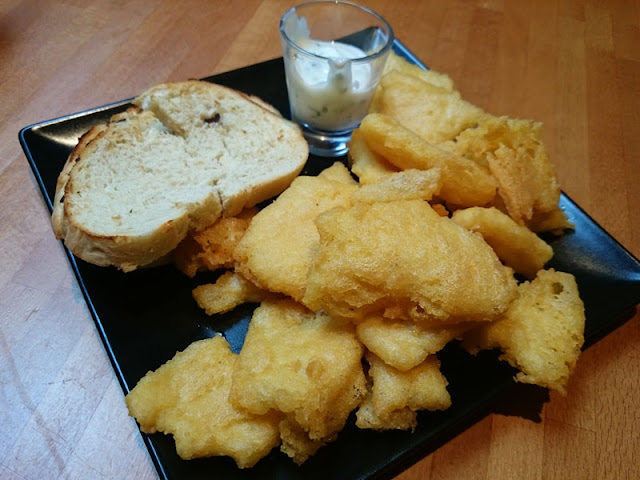 Now these squares of batter made with chickpea flour are something you would find as street food in Palermo and eaten as they are. As a main dish I wasn't convinced, especially served with bread and a chive dip. It made for am uninviting beige plate of food and maybe wouldn't be to British tastes. Whilst I don't think Italian food should be tailored in that way, I think there are plenty of other choices. As I said, as a main maybe not, but the panelle served with a vibrant salad or as a starter with antipasti, would be more than welcome. 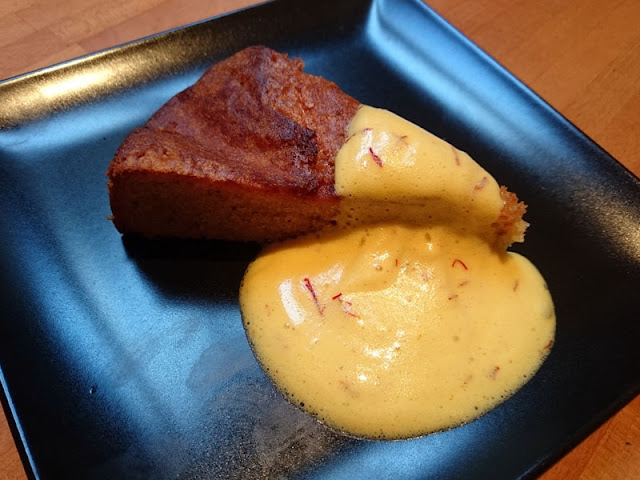 Dessert was a beautifully simple, light hazelnut cake, warmed and made special with a punchy prosecco and saffron zabaglione. The Zeppoline would be well worth a try too.

The Italian only wine list is excellent and I was so pleased to see my favourite white Pecorino on it as well as the fact that you can order almost all of the wines by the glass. They also have some artisan Italian beers to discover too.

I like the idea behind Edendum and certainly appreciate the quality of produce but there are some tweaks needed maybe. I feel the menu is on the large side with too much choice. Something a little more streamlined and rotated often would be more appealing. Presentation needs to be updated a little too - the square and black plates, balsamic glaze squiggles and parsley garnish should have been left with Lloyd Grossman era Masterchef.

I would say that vegan diets have been well catered for here - a rarity in Italian food establishments, and the products for sale are most definitely worth popping in for, even if you are not dining. The large raised bar area is also really attractive for those wanting drinks and nibbles, I'm definitely keen to spend more time with their wine menu.

But little tweaks aside, Brighton has certainly moved on leaps and bounds into real Italian food territory with Edendum.