REVIEW: The Restaurant at Drakes, Brighton

in brighton, fine dining, restaurant, review - 2 December 2014
Brighton has just a small handful of restaurants you could call classic fine dining. I don't know why, but that's just the way it is. We tend to sway between the casual and the conceptual but I always think there is a place for the proper on a plate.

The Restaurant at Drakes has evolved over the years but think it's in a really strong place at the moment. It feels special, grown up, yet far from stuffy.

The silky chicken liver parfait amuse was carefully presented (I'll let them off my pet hate of slate as this was the only appearance of it on the night!) and the homemade bread with a dash of ale was a nice start to the meal. 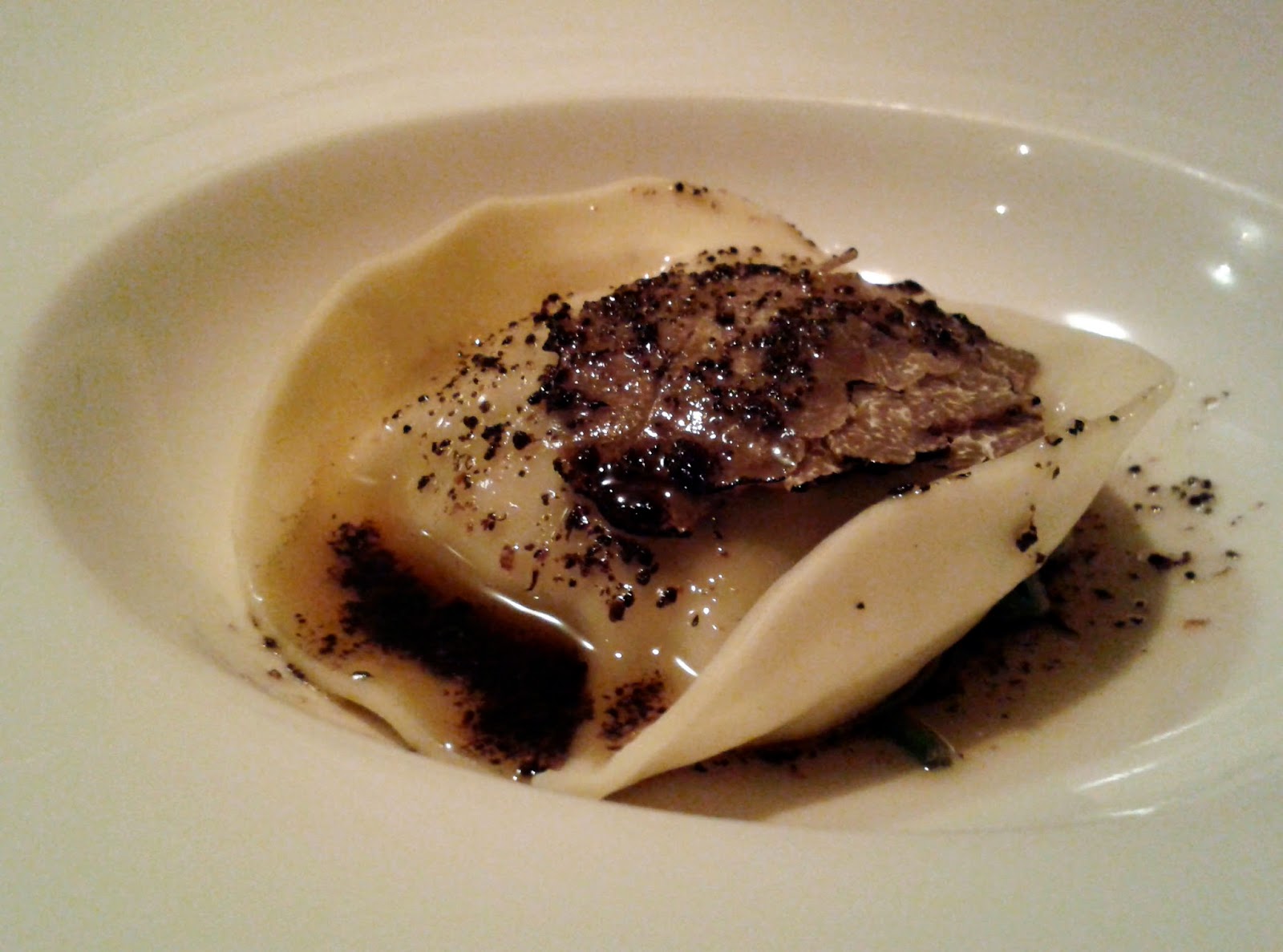 Truffle will always have a place on my menu. It's virtually impossible for me to resist them. The single raviolo was filled with potato which is a great carrier for bold flavour like truffle, and reasonably common in Italy. The filling was creamier and more luxurious than classic potato filled pasta and the pasta itself well crafted. Spinach and beurre noisette were classic partners but all that was needed to allow that earthy truffle to shine. 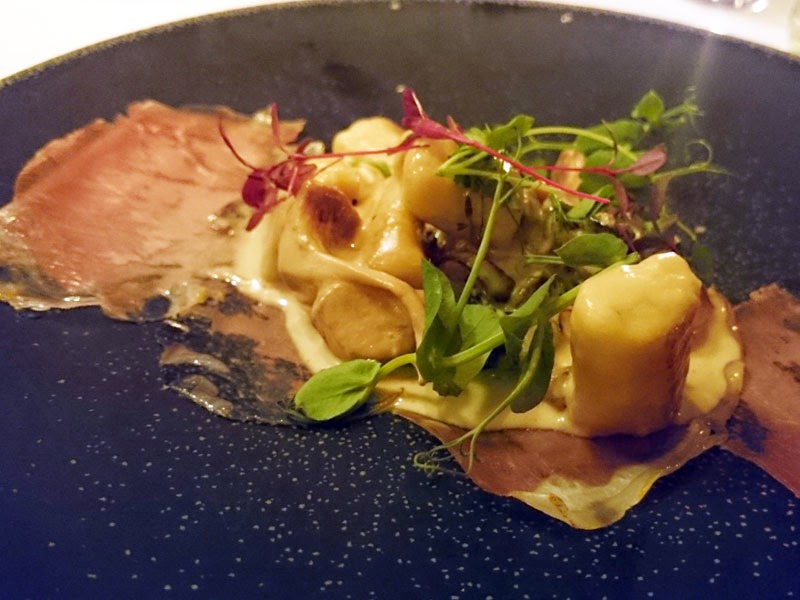 Gnocchi again were spot on, achieving that difficult balance of firm yet light. At first I thought the dish was wildly under seasoned but with a small slither of the Sussex cured ham, the gnocchi, in a creamy sauce with wild mushrooms, were absolutely perfect. 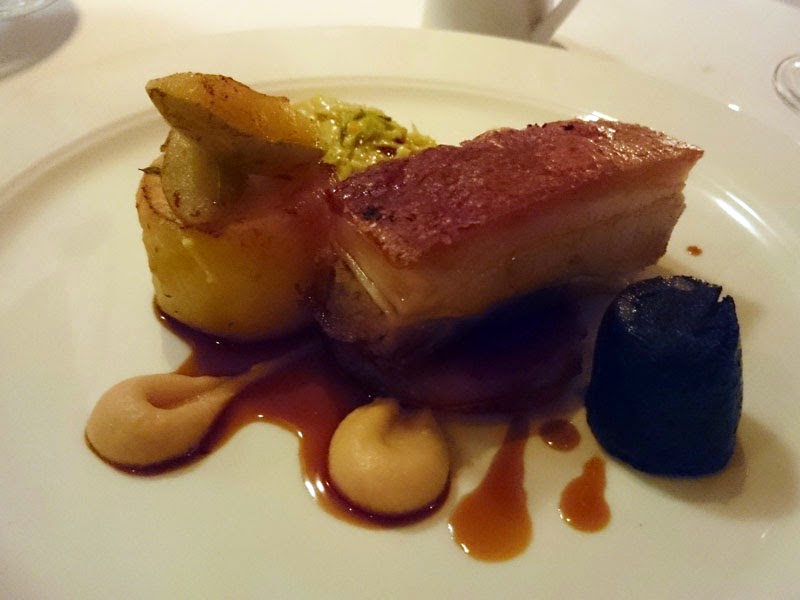 For my main, I chose something I knew they do well at Drakes - meat. The pork three ways included pork belly and a perfectly rendered slice of pig head. There was also a boudin noir (French black pudding) which was almost Christmas pudding like. I love blood sausages and this was really rich, spiced and sweet. The creamed savoy cabbage and carrot was an interesting twist and punchy spiced apple puree helped cut through the pork fat. A thyme jus married the dish up and an additional pot of it was placed on the table. Bonus points. Had I been in a different setting I would have licked the plate. 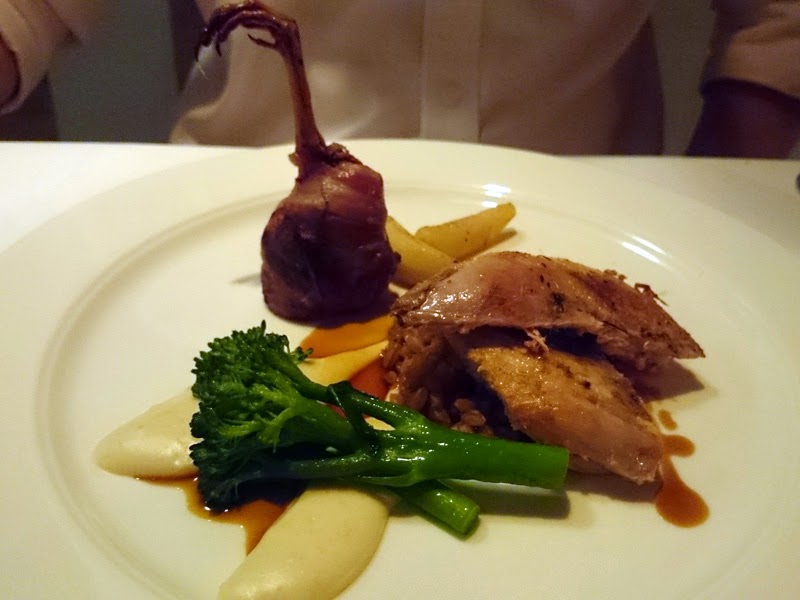 Our usual incessant nattering (sorry to anyone who ever sits near us) was hushed to silence throughout mains, and across the table, Mr. GF was also a happy chap. I really liked the grotesque theatre of the single leg sticking up on the plate of his partridge dish. This little leg was stuffed and wrapped in ham with the sweet breasts simply roasted. Emmer wheat is something we eat a lot of but it's called farro to us Italians and is a fantastic, toothsome, nutty grain, ideal with game.  The broccoli stems, as I've had before at Drakes were very al dente. I love it, those with dentures maybe less so!
Wines were well chosen for us. I don't see the issue of drinking reds with pork if there are robust flavours on the plate and the wine isn't too heavy. I liked my Little Beauty Pinot Noir and the name was a bonus too. Mr GF however, prefers to practically chew on his wine. It needs to be rich, full, smoky and heady. The wine list was sensible with half bottles and plenty of wines by the glass. I was a little surprised to see so few Sussex wines though with just one sparkling from the Bluebell Vineyard Estate.

Pre-desserts were a nice touch with a fresh clementine jelly layered with vanilla panna cotta. 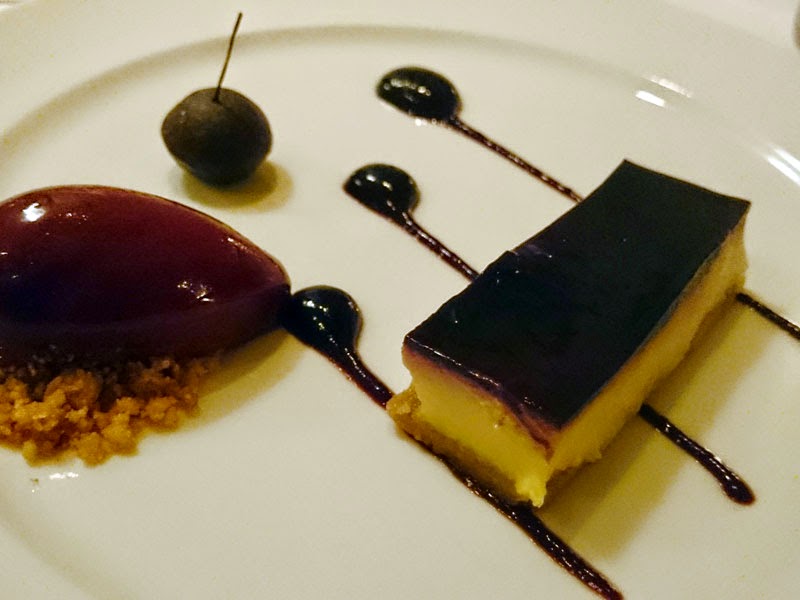 I'm not a sweet toothed person so the tartness of the Brillat-Savarin cheesecake was a good choice. Those expecting a sugar hit typical of sickly cheesecake may have been disappointed though, but for me the almost cheese option in a dessert format was to my taste. I didn't get much fruit from the cherry glaze on the cheesecake or in the cherry sorbet though and think it needed that sharp, fruity lift. But the chocolate truffle dipped in some sort of gel and given a stalk to masquerade as a cherry was a nice detail. I noticed the praline soufflé with Kentish cobnuts were flying out of the kitchen on the night and looked great. 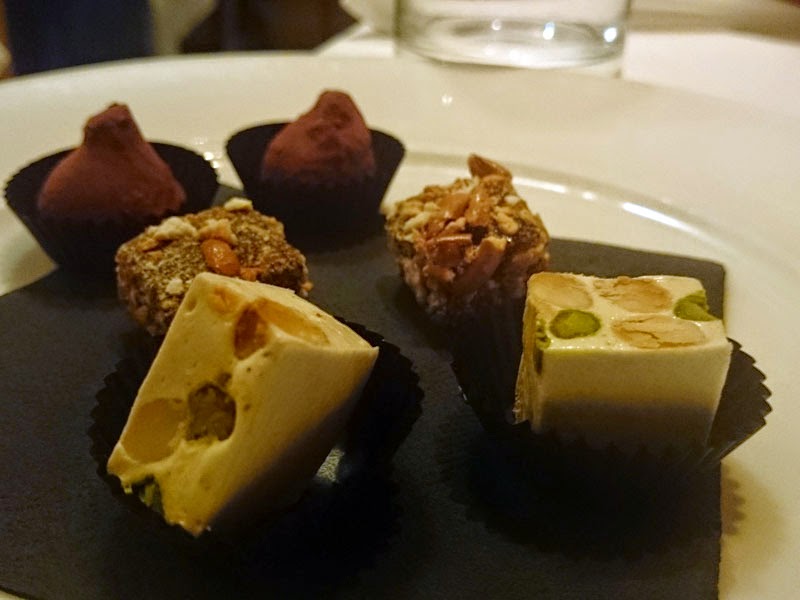 Service was calm, professional and friendly throughout and the ambiance is really comfortable in the restaurant itself. Prices for food I think were reasonable for the quality with two courses at £29.95 and three for £39.95. There is also a five course chef's menu which would be a good choice for a special occasion or a splurge.

Head chef Andrew Mackenzie is an increasingly rare breed of chef at this level whose primary ethos is to still feed the diner well. The classic, elegant and confident food doesn't smack of shock tactic ingredients and gimmick formats that more often than not repulses rather than delights the customer. The wow factor in his dishes relies on smart detail and flavour as well as beautiful presentation. A man after my own stomach for sure.

I was a guest of The Restaurant at Drake's, opinions, as always, are my own.