The New Club is achingly cool. Sat overlooking the Brighton seafront, with a lofty interior, wall graphics depicting classic New York apartments, exposed bricks and mid-century dining chairs. Food is served by the young, the bearded and the tattooed on enamelware dishes. It’s very fitting with the trend for Americana fast food and its Dirty Burger has the acclamation of being one of the UK’s top 5*.

But there is substance to back up the styling, as they try and make components of each dish from scratch. The locally sourced burger meat is minced on site as well as the making of the brioche buns. Although they (strangely) don’t want to be exclusively known for their burgers, despite taking up half of the daytime menu, the other choices are worth a punt. Also worth trying out are the breakfasts – I had the pancakes a few weeks back, although I’d normally opt for a less sweet wake-up call as my tolerance for a sugar hit doesn’t kick in til mid-afternoon. They also do a burger club from 5pm and offer small plate dining in the evenings. With a well stocked bar of craft beer and cocktails and a chugging machine serving Union coffees, this is a fail safe drop-in for any time of the day. This time however I was stopping by for lunch so I chose the pulled pork open sandwich with slaw. Again, they make the pork with their own smoker. There are a few places in the city now offering in-house pulled pork but this beats them hands down. Far juicier and richer in flavour, I actually had to jab Mr Graphic Foodie’s hand away from my plate with my fork. (I made sure our marriage vows did not, in any circumstance, cover the sharing of pulled pork.) I loved the smoky juices soaking into the sturdy sourdough bread and the fresh, zingy red cabbage slaw. I have a habit of ordering the most outrageous looking drinks and my mint and lemon frappé rocked up like a character from Dr Seuss blended up in a glass, but was refreshing in the heat. 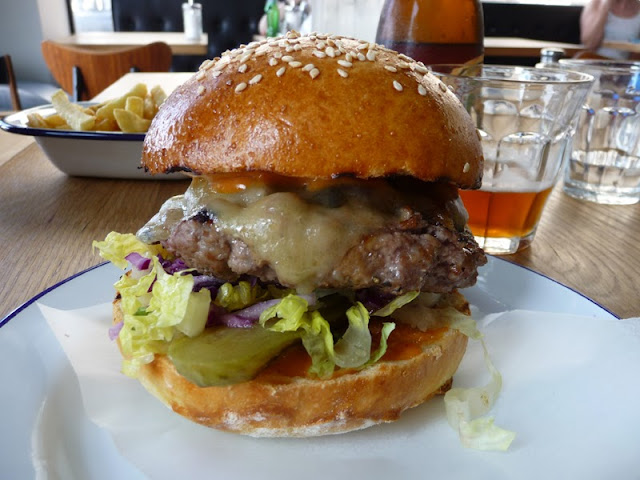 Although the house-cured pastrami and fish tacos sounded appealing Mr GF opted to try out the Dirty Burger with 35 day beef, hickory smoked onion, bacon relish, cheese, sliced pickle, house sauce, (yup still going) shredded cabbage & romaine in a brioche bun. Served pink, as it should be, the burger was juicylicious and had serious smoke. The brioche bun held well despite having a tough job to do with all the additions and I liked the fact that it still had spring. So many brioche buns just flatten to nothing and although they act as a vehicle from plate to mouth, give little to bite into. It was a very fine burger indeed but I agree with Mr GF that the only shame was that the pure flavour from the meat was masked by the other ingredients. Next time I would go “Clean” I think. Baby Foodie joined us this time and the kids menu is limited to burgers, fried chicken and fish fingers. I would have liked some vegetables as an option and maybe the fish fingers made from scratch but kept the bambino quiet through the meal with his first taste of rectangular fish.

We bypassed the cheesecakes and cookie sandwiches on the dessert menu and went straight in for a pretty decent espresso.

Next time I would come back sans enfant for a lingering evening meal with a few of their small plates and a bourbon sour or two before hitting the pictures.

Prices are really sensible for the informal food, more-so for the work and quality gone into the dishes.

Yes, it’s all very on trend and very hipster, but thankfully it’s not all front - the food quality stands up to it and this place is a beacon in a highly concentrated area of tourist fodder restaurants. Which is a great thing for visitors and finally gives us locals a destination eat too. I’m sure the New Club will be around long enough to become a bit of an old club.

I was invited to review The New Club.