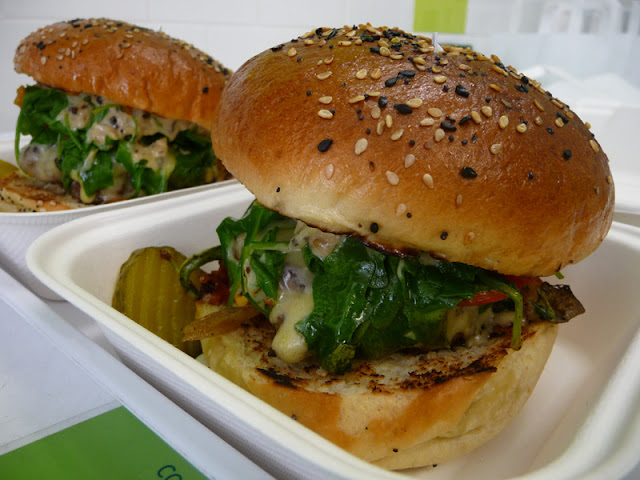 I was just about to walk out of the door with my takeaway order when the chap behind the counter called out "there's an automated hand sanitiser just on the wall there". And that's just it with this place. Detail freaks. What other burger joint has a hand sanitiser available to customers? The first I've seen and makes total sense with it being food you eat with your hands on the fly.

And looking around, everything has been considered, the tile and napkin colours, the stamped burger boxes, the branded toothpick flags,  But this isn't swish, it's clearly been done by hand and with a lot of love, much like their burgers on offer. 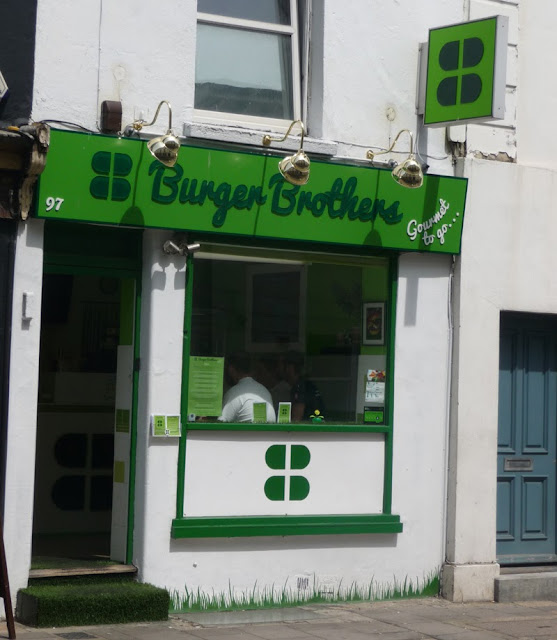 The recently opened Burger Brothers in North Road is a small burger joint run by two "brothers" (I'm not sure if they are actual brothers, but hey). And it's been causing a bit of a stir. I'm not really one of these trending burger fanatics but even I felt the need to try it out asap.

There are just the right amount of burger varieties to choose from, fries and a selection of canned drinks for £1. I opted for the Classic Beef because I really don't like my burgers messed around with too much. Aubergine slices, beetroot or fried eggs don't belong anywhere near it in my book.

The buns are worth a paragraph on their own. I swear I have never seen such glossy, beautiful buns (stop sniggering at the back) as these. Apparently they are made by a local artisan baker and is a Challah bread recipe, a Jewish bread usually plaited and eaten on special occasions. Burger Brothers felt the fashion for brioche buns wasn't for them and after sampling the Challah I would agree with them. Whilst a brioche is better than most, holding in the burger and giving sweetness, often it's just too soft. The traditional burger bun, or for the totally insane, the off-piste choice of ciabatta or similar are often too hard, resulting in that awkward burger slip and a whole load of mess. The Challah however, is ideal. Soft enough, sweet enough but robust enough to keep it all together. I started lunch in a white shirt and finished it in a white shirt. Result.

Minced on the premises, the meat is good. Flavoursome, juicy and well textured. I'm not sure it's local but would be great going forward if it could be. The wild rocket, relish and mustard gave the burger sharpness, softened by the caramelised onions and mayo. And I love a pickle on the side me. Not too much stuff, but enough to keep it interesting from first bite to last.

If you do like your burgers crazy style there are a few options with their Bennetton (Stilton, pancetta, wasabi mayo) or The Favourite (Goat cheese, roast peppers, secret sauce). Vegetarians are catered for with their home-made veggie burgers containing half of the greengrocers and for once they seem enticing enough even for carnivores to try.

The skin-on fries could have had a little more crisp to them but were decent enough.

Service was friendly and had these guys rocked up a couple of years ago would hold the top spot for burgers in the city hands down. Currently in the burger-boom era, I think they are still up there, in the top three for sure. The New Club (review up soon) will give them a run for their money and Trolls Pantry is a much-loved local burger, but for me I prefer my burgers tidier and the bun sturdier so for me I would say Burger Brothers is my personal favourite.

It's all good, my brother.