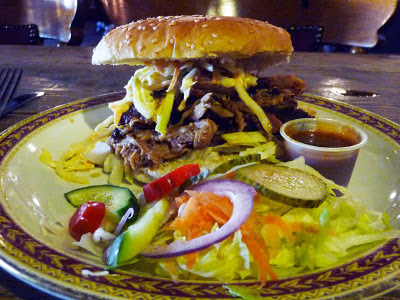 To find great food in a seemingly bog standard boozer in a part of town that is more Pound Stretcher than Phillip Starke would be a surprise. The design studio I work with has recently moved to the area (said to be the new Shoreditch... er, yeah) and unless you venture into the Laines you basically have the delights of Subway, Maccy Ds and a few questionable cafes.

So I almost spat my tea right out at the screen when I read Jay Rayner singing the praises of the Texas pit barbecue food being served literally round the corner, not in some chandelier dripped Brightonian "gastro pub", but in a proper, bonafide, sticky floor boozer. At the heart of it is chef John Hargate who is nothing short of a Barbecue champion with plenty of awards under his belt and a CV boasting work under some of our treasured celeb chefs.

This was too good to be true, especially in this carrot munching city. The menu had me hyperventilating – what to have? The ribs have become something of legend around town, but what about the 18 hour brisket, hot dogs, chicken or pulled pork washed down with piles of spicy rice, beans, chilli or mac and cheese. You can even have the Texan delicacy, the er, Armadillo Egg, a sort of sausage meat and bacon wrapped jalepeno stuffed with cream cheese.

I finally settled on the Hickory and Apple Smoked North Carolina Pulled Pork sandwich with homemade coleslaw and Sweet Apple BBQ sauce as my into to the BBQ shack. As I waited I could now focus on the surroundings which were as I expected but the boozers and diners offered an awkward mix of locals and middle class Hove yummies. That’ll be the Guardian readership for you, oh hang on that’s why I’m here.

Anyway, the sandwich arrived, served, how can I say this, "rustically" on Aunt Mildred's discarded crockery, this isn't a feast for the eyes by any stretch but one bite in and I would have been happy to dine on this at the dump. Heavenly, smokey, succulent porky goodness. Forget the napkins, I was going to have to have a shower after this, the BBQ sauce and coleslaw slip sliding around in the bun, down my chin, on my lap. Thank goodness Mr. GF and I had been together for 14 odd years because this ain’t no first date food! He was more than happy with his pork burrito but think he was kicking himself for not going with the ribs. Next time! 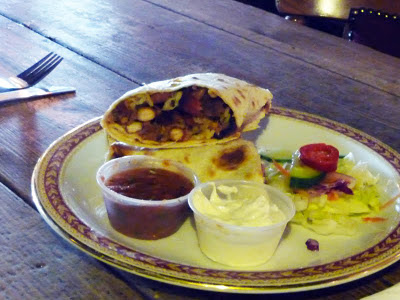 The only think I would change would be the bun, which when half saturated with coleslaw juice wasn't really up to the challenge of holding together the outrageous amount of pork filling it had, but really the BBQ Shack is all about the meat.