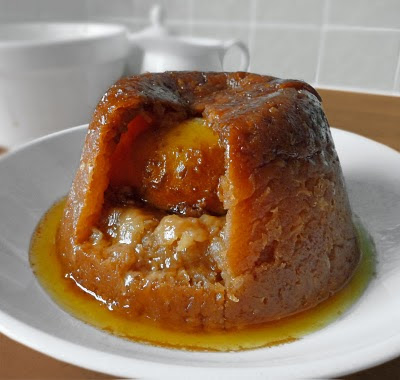 You may have gathered that this isn't a typical dish to come out of my kitchen but I have written an article on Sussex historic recipes for this year's Brighton Spring Food Festival*. In the name of research *cough* I am making a few of the recipes I come across. God help my waistline.

One pudding that came up time and time again–and I suppose is the most well known today due to its kooky name and resurrection on restaurant menus–is the Sussex Pond Pudding, a suet crust holding a melting butter and sugar filling infused with a whole lemon. I also have a sneaky suspicion that Heston may have used this as the inspiration for his now infamous Christmas Hidden Orange Pudding, such is his interest in historic recipes and I believe this pudding is available at his new Dinner restaurant "inspired by historic British gastronomy".

Interestingly, the pudding in some of the earlier recipes do not use a lemon at all, sticking to the butter and sugar filling but I like that the lengthy steaming time (3.5 hours) creates a rich and sharp sauce with the help of the lemon. Once cut into, the name "pond" is illustrated as the pool of sauce circles the pudding, however there are references to this pudding previously being called "pound pudding" as the measurements were generally a pound of everything which would also explain the term.

You can add some currents to the filling if you like which is a common acceptable variant of this pudding. You will need a 1 litre pudding basin, some greaseproof paper, foil and string.

Combine the flour and suet in a large bowl and add a little of the milk at a time until you get a firm, manageable pastry, one that isn't too sticky or too dry. You may need more of less of the milk.

Lightly dust the kitchen worktop and roll out two thirds of the pastry into a round to fit the inside of your basin, allowing for a little overhang. Once your pudding basin has been lined with the pastry, cut the butter into small cubes and mix in the brown sugar gently in a separate bowl. Put half of this mixture into the lined pudding bowl. Using a wood or metal skewer, make holes all over the surface of the lemon and then place this on top of the butter sugar mixture. Add the remaining butter and sugar mixture on top of the lemon.

Roll out the reserved pastry to create a lid. Moisten the edges of the pastry base with a little milk and lay on the lid, using your fingers to securely fasten the two together. Trim of any pastry excess.

Grease your baking paper with a little more butter and fold it with some pleats. Place this over the pudding as well as a double layer of foil and secure tightly with string. Trim off the excess paper and foil.

Place the pudding in a large saucepan and fill half way up the pudding with boiling water. Steam the pudding for about 3.5 hours, checking the pan regularly to top up the water levels.

Serve with thick cream and then go for a very, very long run.