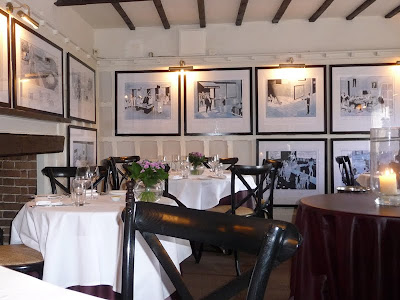 You may recall that I visited The Chequers Inn in Maresfield earlier this year. Food was decent but you could tell it was winding down for a takeover or refurbishment. Forward to a few months later and Marco Pierre White has transformed the place into one of his apostrophetastic Wheeler's of St James's restaurants.

What was formerly a rather traditional, rough cornered yet cozy pub with a restaurant has been given the Marco brand touch and now has crisp white tablecloths, those chairs and white walls plastered in those huge frames, with kooky graphic charactures of famous faces (because there is nothing to increase the appetite like dining under the sketchy mug of Andrew Lloyd Webber.) Also noted was the moody “hey ladies” photographic portrait of MPW, languishing seductively and battle worn after an apparent hard service at the back entrance of a kitchen - remarkable seeing as he hasn’t cooked professionally for years. The man with his sleeves rolled up here is head chef Neil Thornley from White's The Yew Tree, but Marco can still be found swanning around doing book signings so you may still spot him here or at his other recent acquirement of the The Kings Arms Inn at nearby Fenhurst.

But anyway, apart from the change in the interior the next shock was the price. £16.50 for 3 courses? I looked over my shoulder and under the table for the catch. This was the set Sunday lunch menu but there didn't seem to be any other option, and at this price, it would be rude not to. Checking the prices of the à la carte after, although considerably more, are still reasonable with starters around £7-10, non-steak mains £14 and desserts £6.50. 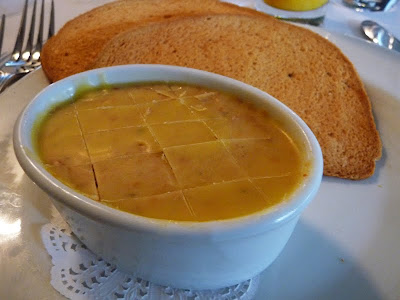 As the starters came out, all in ramekins and all fridge cold, it dawned on me that Sunday lunch was a relatively easy ride service, hence the price. Starters and puddings seems mostly pre-made (so that would be the catch then). However, despite the chilliness, my Kipper Paté with Whisky served with Melba Toast was rather nice, beautifully textured and generously salted. Mr. GF's practically identical looking Potted Duck with Prunes D’Argent and Hot (but served cold) Toast was chunky, meaty and flavoursome. 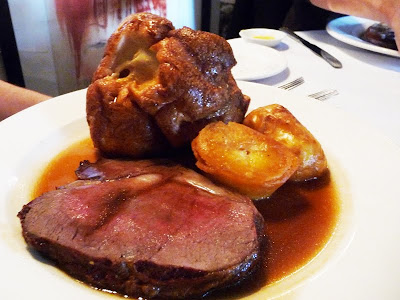 Although a decent selection of fish dishes were also available (the Wheeler's chain formerly being fish restaurants), all three of us oped for roasts, myself and Mr. GF choosing the Roast Suckling Pig and Mr. A the Roast Rib of Aberdeen Angus Beef with a rather impressive Yorkshire pudding. 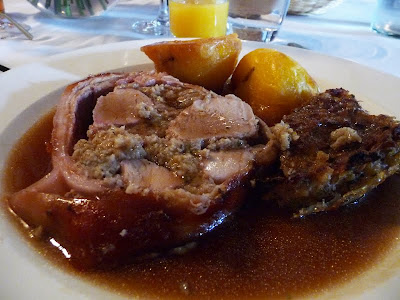 The roasts arrived with an army of side dishes; cauliflower cheese, swede puree, braised red cabbage and carrots in a parsley sauce. I had no complaints about my pork other than why the bejesus serve it with stuffing when it is already rolled with stuffing inside? This irritated me, but otherwise the pockets of sweet, tender meat and chewy belly fat was delicious. Mr. A's beef was even better, tender, perfectly pink and juicy. Having all the vegetables in little dishes is a bit of a chore, by the time you have handed them all around with perfect British manners, your meal is half cold. 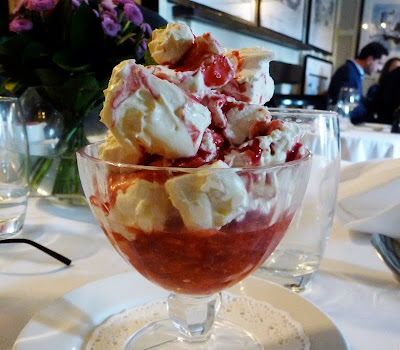 For pudding I chose, in a moment of madness, the Eton Mess, which was a ridiculous choice for the cold day outside. I've never had one before but meringue, berries and cream... meh. But this simpleton of a pudding will always be meh. 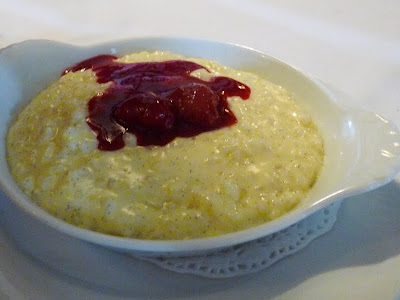 Mr. A had lucked out again with his more appropriate choice of dessert with a rather good Rice Pudding with Raspberry Compote. 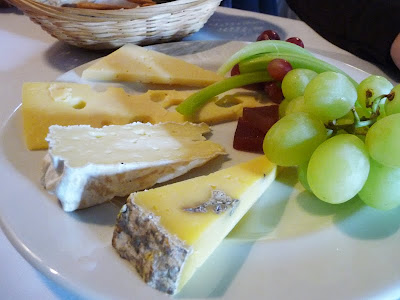 Mr. GF will always, always choose the cheese if it an option, making me think I married a mouse not a man, but this example rocked up it deserved the gasp it created from the three of us. I've been served cheese "boards" at half this size AND had to normally pay a surcharge for it as well. Not sure how "local" the cheeses were despite being billed as that, the plate was generous to a fault and the basket of crackers rather good too. Mouse boy happily chomped his way through it.

Service was friendly, young but bumbling. None of the waiting staff seemed to be looking after any particular table, causing many forgotten items and our waitress taking our drinks orders showed a lack of knowledge of the beers on offer ("nah, I don't think we do local beer anymore"). Two of the other tables in the room seemed to actually be complaining but to be fair they did seem particularly hard to please people in tweed jackets and boofy hair styles.

Despite the misses, I would still be keen to go back and order from the à la carte, as Sunday lunch is clearly a half pre-made affair, but as I crunched my way through my roast potatoes during my main, I couldn't think of a better value (but not the best) Sunday Roast in Sussex, with most local pubs pipping £16 just as a single dish.

I would say that The Chequers Inn is worth a try, you may see a few sparks but don't expect fireworks. Time will tell how successful this venture will be for Marco Pierre White, with most people initially visiting out of curiosity (I'll hold my hand up here) and as interest dwindles it will only be the quality of food that will make people take the special trip to Maresfield because despite being billed as a pub for the locals, I can't see the polished interior being a place for muddy boots and a pint after work.