in cake, italian, wedding - 11 August 2010
Italians are not famous for their cakes. Pastries maybe, but cakes, no way. Italian wedding cakes tend to be a dull flat sponge cake, covered with cream and little else. Sometimes they are decorated with fruit or other strange things but I have yet to look at a cake and go "wow". That was until my wedding, where "wow" was one of many, many, many short words I uttered when I saw my cake: 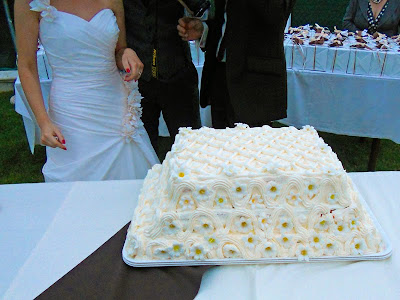 My exploding head is just out of shot. To give you an idea of what I actually asked for, the picture below is what I tentatively showed the baker for "inspiration" who waved his hands above his head shouting "no problem!" 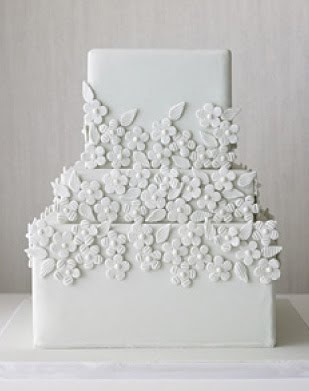 I should have known it was going to be a disaster from the increasingly odd phone calls I received leading up to the day in which the last one I was found repeatedly screaming "Make it like the photo, just make it LIKE THE PHOTO" down my mobile in a supermarket car park in Italy.

I mean, it was even freaking red on the inside like the armadillo cake in Steel Magnolias, who the bejeezus mentioned red sponge at any point?! Luckily this was the only food hitch and I did see the funny side of it (normally I would have launched it at the baker's head). The cake had apparently totally collapsed before being brought out and this was the frantic efforts of the entire kitchen staff and the "Manuel" type hotel owner. You can just see the edge beginning to blow.

I am totally posting this on Cake Wrecks.

In other cake disaster news, we ordered a one for Mr. Graphic Foodie's aunt while we were still in Italy, her name is Ruth. I even wrote R-U-T-H in capital letters for the baker so there was absolutely no chance of anything going wrong. 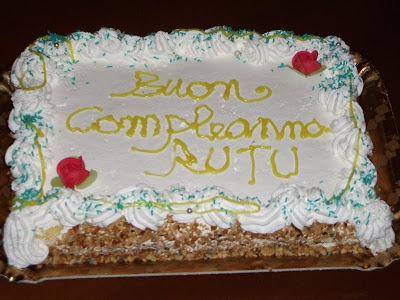