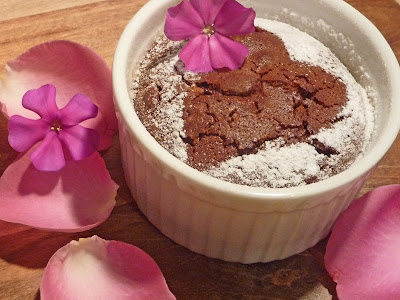 When Mr Graphic Foodie temporarily worked in sales in London (which included selling his soul) there were certain perks. One of these came from a chap he used to work with called Edward, who made the most wonderful sweet treats and brought them into work for everyone to share. Due to the amount of people working in the office only a select few got a taste of these, and I soon realised that when Mr GF brought me home a little taster of these cakes and cookies that it was a real sign of true love as he often had to forgo a taste himself. Can't say I would have done the same for him!

This chocolate pot was one of my favourites and luckily Mr GF got the recipe from Edward before he left. Edward, I never met you or know where you are but thanks for the recipe and hope you don't mind me posting it here! Share the love and all.

This recipe is so easy, something between a chocolate fondant and chocolate cake. The textures of this dessert are fantastic, the richness of the chocolate, the chewiness of the crushed amaretti biscuits and the gooeyness of the centre.

The flowers are a bunch of Fairtrade roses and lisianthus sent to me by Interflora. Thanks very much. Mr GF may share his food but he seemingly hasn't figured out how to order flowers so it was a real treat! Anyway, I like Fairtrade products because the price paid to the producers and workers includes a premium that is invested in projects that benefit workers and their families. Schools, health centres, facilities - that sort of thing. Nice Interflora are doing the same.

Inspired by the flowers, I decided to use a Fairtrade dark chocolate flavoured with cardamom, ginger, cinnamon spices and orange oil (from the Co-op) which worked really well but also good is just a plain chocolate that I normally use.

You will need 2 ramekins, about 7cm diameter.

Gently melt the chocolate and butter over a low heat.

Beat the eggs and vanilla together and then stir in the flour and sugar.

Add the egg mixture to the chocolate mixture, mixing thoroughly and then fold in the crushed amaretti biscuits.

Butter and sugar the inside of the ramekins and pour in the mixture.

Place the ramekins on a tray and bake for 10-15 minutes until they have risen.

Served immediately, they should still be nice and gooey in the middle.
Tweet