Home » comment » design » Waiter! There's some art in my food.

Waiter! There's some art in my food.

At art school I remember being quite drawn to (and a bit freaked out by) the fruit and veg portraits of Renaissance artist Giuseppe Arcimboldo, who was perhaps the first artist to use food as art in the mid 1500s. But that was a long time ago and let's just say things have, er, advanced since then.

For instance, who the bejeez would think that sculptures of your head in cheese could be an untapped market? Or the Pope expressed by the medium of pizza dough appropriate? Questions I never thought I would ask myself.

Take Norma "Duffy" Lyon, famous for her life-sized cow sculptures made from butter. But they are nothing compared to her Last Supper effort. 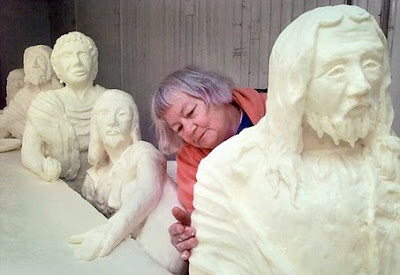 Image via Mental floss (as well as 9 other butter sculptures)

"When another corporate gift won’t due, order a miniature cheese carving and surprise your recipient with the most unusual gift they’ve received in years." You're damn right. Or better still, why not surprise your loved one this Christmas with a commission of their head in cheese? No fear of them guessing what it is before hand. 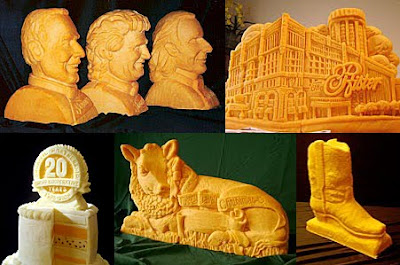 Chinese artist Song Dong used 72,000 biscuits, give or take a Hob Nob, to make an entire city. I think this is kinda cool.

The Colosseum in pizza dough was whipped up by Prudence Emma Staite. (I was trying to think of a pun around glad-he-ate-her but I've lost the will to live here.) 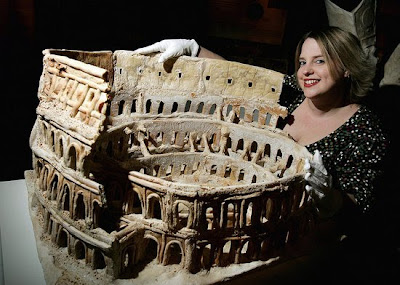 Japanese sushi chef Ken Kawasumi doesn't think that sushi is decorative enough as it is. 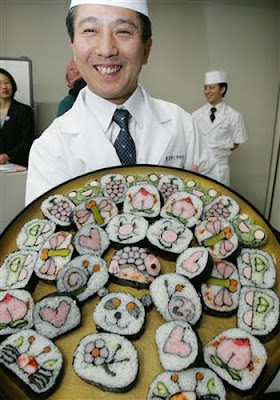 I've found some foreign objects in my food in my time but I'd be amazed to see these little fellas.

And you thought fiddling with the Edam wax was playing with your food.
Tweet