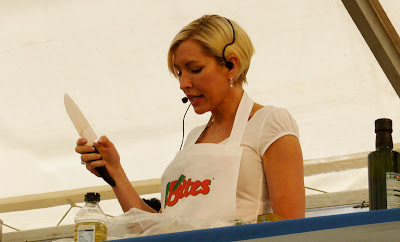 The paps were there and I guess they didn’t have a keen interest in how to make roast potatoes crunchy. Security was in place ready for the food fight. Not exactly what you would expect from a food demo but this was a little out of the ordinary.

Heather Mills was here to talk about vegan food and her controversial new restaurant in Hove, V-Bites. Ms. Mills and her crack team were kitted out in V-Bites T-shirts and all I could think of was how terrible the logo was. Why is the V stabbing the Bites? But that’s more Graphic than Foodie so I shall leave it there, although if anyone cares I can happily supply a 5000 word essay on it.

Heather first asked the room who was vegan. To her (and my, actually) surprise there were just two vegans and a pescatarian (sounds like a band!). To her credit, she took it on the chin and said she was pleased, as she wanted to show us carnivores the benefits of having one or two nights off a week from meat. Cue the needle over vinyl sound.

Right. What the shizzle is the deal with some vegans and veggies thinking us carnivores sit down to a Fred Flintstone size rack of ribs for breakfast, lunch and dinner? I eat meat a couple of times a week maybe. The rest of the week is filled with a wide variety of pastas, risottos, curries, soups, fish and a car boot load of vegetables. WE DO NOT NEED TO BE SAVED.

It’s ok, I’m over it. First on the menu was a stir-fry using the revolutionary beef substitute soy product that she is developing. Someone did actually have to shout out that it was burning. But you know what it tasted like beef! Texture was still a little flabby but not bad. I don’t like soy sauce doused over stir-fry but that’s a personal thing. 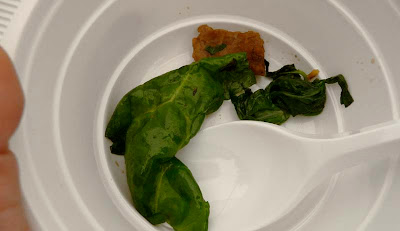 Next up was her Cheeky Nut Korma served up with Heather’s secret homemade mayo. Yup. Mayo on korma. The textured chicken substitute soy thing was a bit odd and not quite as successful as the beef. The korma sauce was lovely but the lemony mayo on top was “unusual”. When asked how the mayo is made without eggs, she would not divulge, only to reveal that it involved some kind of…yup, you guessed it, soy substitute.

She has developed these meat substitute products and she even said she was going to have her own factory making them. In case you were wondering, the mysterious meat flavour is “all about the herbs” apparently.

We finished off with her chocolate and ginger cake that is proclaimed to be irresistible to children but lacked the lightness and richness you get with glorious dairy butter.

She gave us a good tip on roast potatoes and how to cut veg. She also made some good points. I agree that meat should not be an everyday food. I believe in eating a variety of fresh, wholesome foods, most of which are in fact, vegan.

But I don’t agree with restricting the diet unless for extreme medical or religious reason. And if you do choose a vegetarian or vegan diet, I don’t see why you need these processed, flavoured, rubbery soy products – vegetables and fruit are beautiful, full of flavour and contain most of the nutrients you need alongside whole grains, pulses and the like to make some pretty spectacular meals. Soy substitutes, for me personally, have no taste benefits and I don’t see how they can differ from chemically charged processed meat products that are also unfortunately available. Traditionally used in Asian cooking for 3000 years or so, soy was consumed at a much, much lower quantity than today. They also fermented it to remove toxins but it is not the same as the Western stuff you can pick up now that is available unfermented, highly processed and creepily “hidden” in a lot of other food.

Oh, apologies for getting heavy, I don’t want to preach the other end of the argument at the wrong audience. I am certainly no expert in soy but I live by the “everything in moderation” rule, and what I do know is that free range, respectfully raised animals provide us with wonderful nutrition through their meat and dairy products. Oh and that food should above all be enjoyed with gusto and passion.

She was excellent in her delivery and you could tell she really does believe in what she is doing, is uber passionate and for that I have respect even if I do not agree. You go girl. She will even be cooking at her V-Bites restaurant, focusing on her pièce de résistance, the Sunday roast (when her daughter is not in term time and she is not doing charitable work in the US and…and...and...)

Was I converted? No. I shall continue to enjoy my veg without the need for substitutes, soy or anything else processed. She did however work up an appetite so I pootled over to the long queue at Sam’s of Brighton’s stall for a wonderful, minted, Sussex reared lamb burger.

Next time: Back to meat, fish and dairy goodness with the amazing Richard Eldon from Blanch House and back on the booze with more beer and cocktail tasting.
Tweet